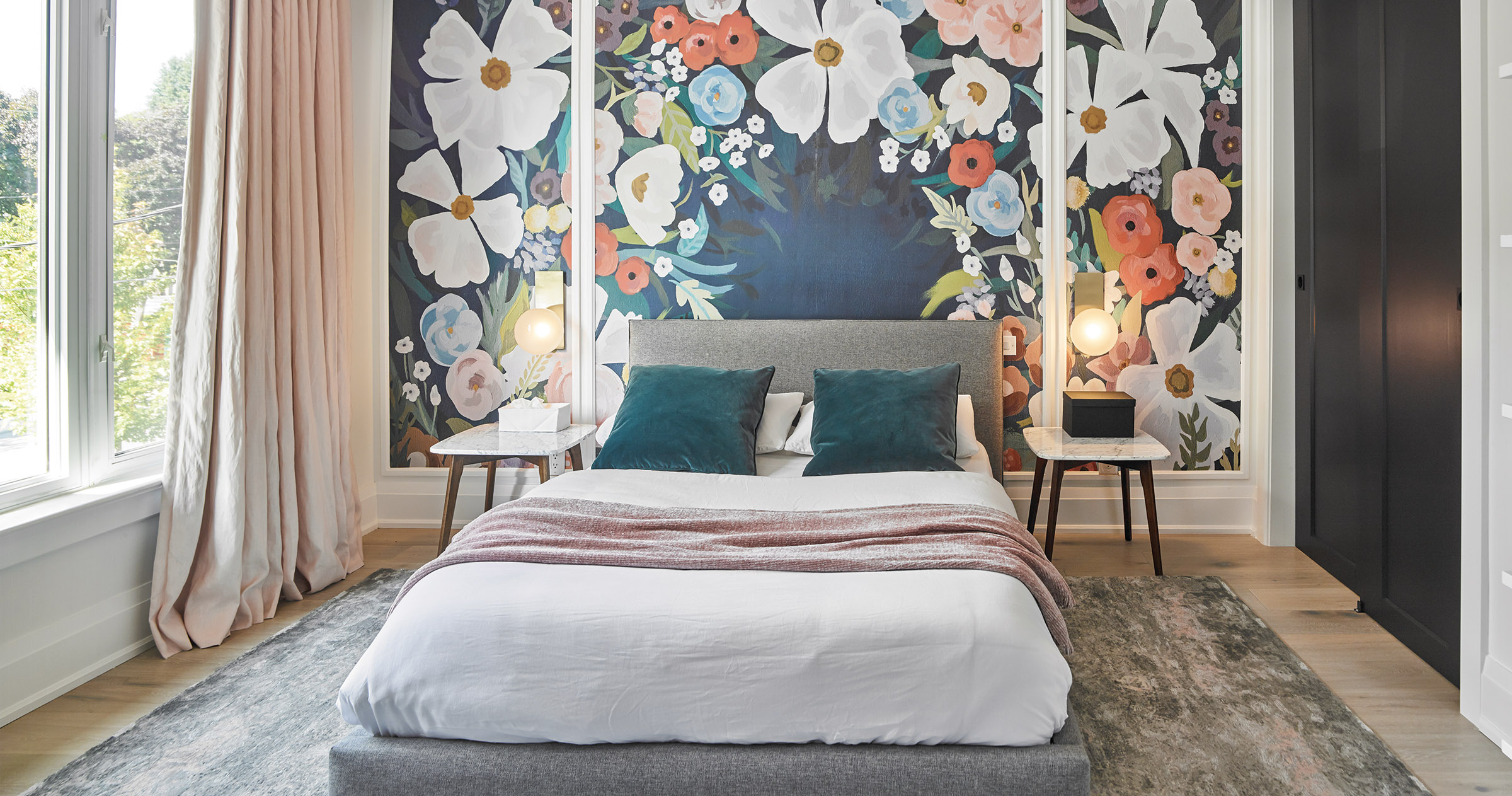 A Cozy Place For Rest At Day’s End

Some people take a sandwich approach to renovating. They start with the main floor and later layer on the levels above and below. But for the update of this 1960s-era Toronto home, “the homeowners wanted the four second-floor bedrooms and the basement done first,” says Veronica Martin, interior designer and partner at Two Fold Interiors in Toronto. “It’s not the usual way of doing things.”

Understandable, though, given that the owners’ professions both require long hours — he is a lawyer, she’s a physician — making a place to lay a weary head de rigeur. They asked Martin, the project’s lead designer, to draw upon her experience in designing luxury hotels. The aim was to give a five-star feel to the private spaces in which the couple unwind.

The stage is set upon mounting the stairs to the second floor. “Many people underestimate how important the hallway is,” says Martin. “It states your design intention for what lies beyond.” With its spa-like look, this one says, “come rest a while.” Floor-to-ceiling shiplap covers the walls, which are painted a soothing warm white: Benjamin Moore’s Chantilly Lace (2121-70). It creates a bold contrast to the black doors that line it, leading to the bedrooms and children’s bathroom. Wide engineered white oak planks run underfoot and extend into the bedrooms.

For the bedrooms and basement of the 2,200-square-foot home, the designer applied her signature approach to design, mixing classic details and modern elements in unexpected ways. The centrepiece of the master bedroom, for instance, takes the concept of a classic upholstered bed and gives it a chic and contemporary look. Flanking it are retro-style side tables, while overhead, a bold and sophisticated black pendant light hangs. Both elements give a nod to the home’s mid-century roots. Shiplap covers the wall behind the bed and a bare-foot pleasing soft silk rug in warm neutral tones runs underneath. A short corridor off the master bedroom is lined with two pocket doors, one on each side, that lead to his and hers walk-in closets.

The opening also serves to frame the striking view of the vanity area in the master bathroom beyond. The floating white oak vanity gets the same modern-retro treatment. “I played with black accents in all the rooms — here the framing around the light fixtures and mirror and hardware — to echo the black doors used throughout the second floor,” says the designer. With so much going on in the vanity area, the rest of the bathroom is visually quiet. Porcelain marble-look tiles cover the floors and wrap up onto the walls of the shower area on one side and freestanding tub on the other. Brushed-gold-finished faucets, sconces and shower system add a luxe finishing touch.

The owners were equally concerned that their four-year-old twin girls and son, age 2, have their own bedrooms and a separate play area in the basement. “The children’s rooms are young and fun without being ‘kiddy-ish,’ ” says Martin. “Adding some classic architectural elements like wainscoting, wall panels and ceiling medallions means the rooms will grow with them and still be relevant in 10 years time.”  As well, the children’s bedrooms reflect their individual personalities. The son was especially excited about the design, as it would mark his first “big-boy” bed. And though twins, the girls have quite different tastes.

Each of the children’s rooms was given a wall covering that not only has a distinct personality but creates the room’s focal point. The son’s room has a huge wall mural showing a map of the world. His globe-trotting parents can point to it when telling him stories about their travels, yet the design is sophisticated enough to still work when he’s older. One daughter has marble-look wallpaper covering the wall behind her high upholstered bed that boasts soft white linens and pink accessories. The other daughter gets a big, bold flower mural inside wall panelling.

The basement family room posed a challenge for the designer. While having space for the children to play was very important, so was using the room for other purposes. That means toys and games need to be easily tucked away when the family descends to hang out and watch television. The mother of two young daughters herself, Martin knows how essential large floor-level bins are for little ones to use. She placed a row of them in the custom built-in cabinet designed to frame the wall-mounted screen facing a comfy sectional. Beside it, a tall cabinet conceals auxiliary electronics and things best kept out of reach, such as board games with small pieces that are choking hazards. A Murphy bed installed on one wall lets the room serve as an occasional guest room. Visitors also have access to the three-piece bathroom with full shower on the same level.

The family reports making good use of all areas and enjoying the unique, timeless design with a soupçon of elegance. “I’m looking forward to designing the main floor renovation for them,” says Martin, “so we can link all the spaces.” •