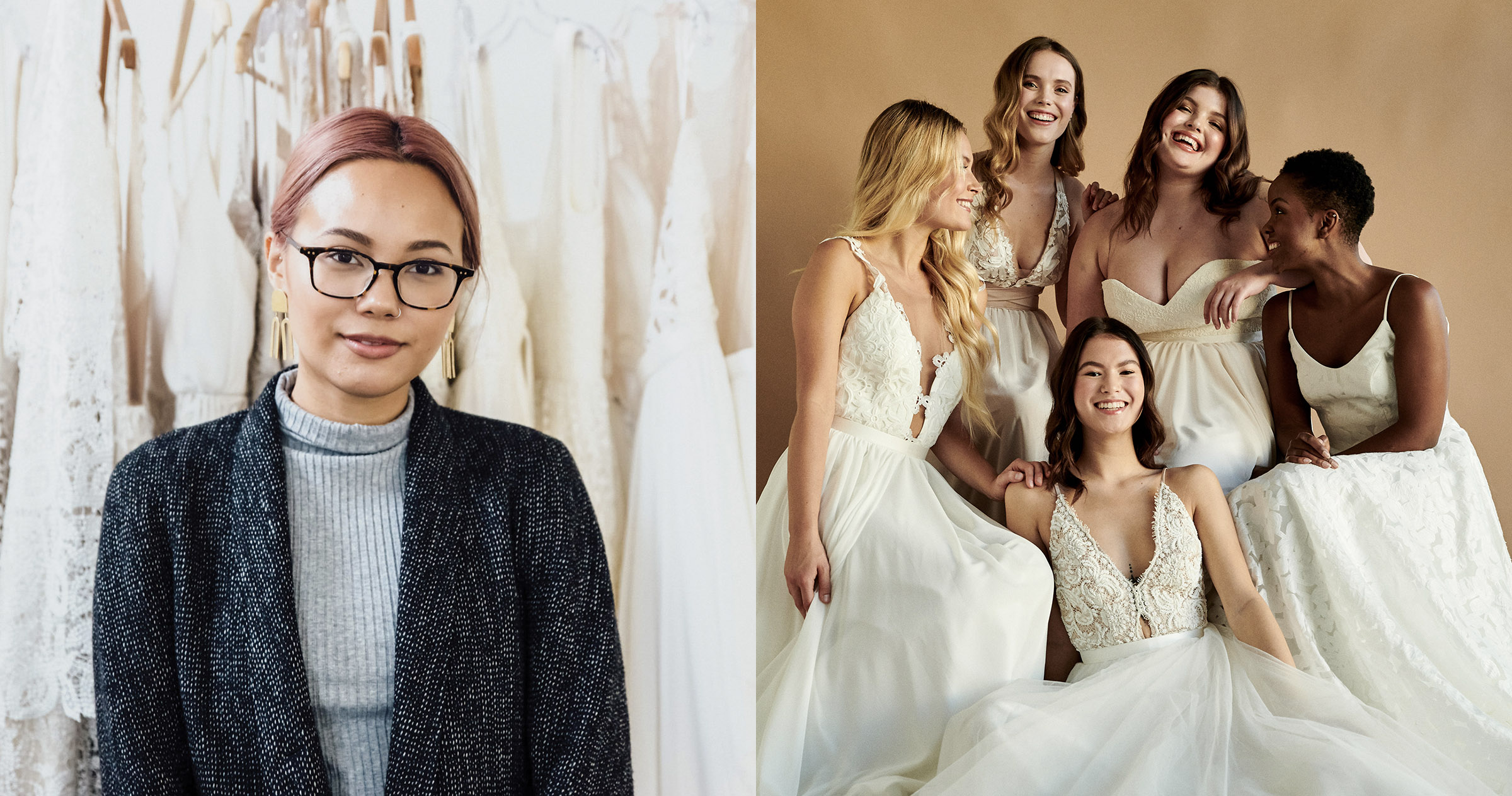 A DESIGNER MUST STAY on top of things to build a global brand in the competitive bridal industry. And so, the location of Gaby Bayona’s workspace seems somewhat symbolic. Poised on a floating mezzanine high above her Mount Pleasant headquarters in Vancouver, she over- sees a growing empire of sought-after bridal gowns produced locally and sold worldwide.

“It’s a big deal for me,” says the wedding gown designer. “Having this beautiful space just for me to be creative in. There was a time I had to move out of my apartment because I needed it to warehouse fabrics.”

That was eight years ago, when the 26-year-old CEO had but an online bridal gown shop on Etsy. She worked out of a one-bedroom apartment in a converted warehouse in the Gastown area, zoned for both work and living. Brick walls and high ceilings provided an artsy vibe. Customers would come for fittings and use the bedroom as a changing room. By year two, a major retailer had sought Bayona out, after which her business “just grew like crazy.”

Today, her company, Truvelle Bridal Ltd., sells four lines of wedding dresses out of two flagship stores – one in Vancouver and the other in Calgary – employing a staff of more than 30. Her dresses are also carried online and in more than 70 independent bridal boutiques across 12 countries worldwide. Plus, she is a partner in two wedding accessory businesses and the owner of a modelling agency.

Bayona says that some serendipity was behind the success of her debut line, Truvelle, in 2013. “Brides were just starting to turn away from traditional wedding magazines and look to Pinterest and Instagram for inspiration,” she says. “A new wedding dress aesthetic was popping up, and I was part of the first wave.” Catching it were the designer’s softly romantic flowing gowns, a breath of fresh air compared with old-school gowns with heavy beading or ruching and elaborately pouffed or swagged skirts.

What hasn’t changed is the importance women place on the dress for their big day. To give them that extra design edge, the designer listens to her customers rather than following trend forecasts. Quality materials and workmanship still count, and both are hallmarks of the 100-per-cent made-in-Canada dresses she produces.

Both designing and entrepreneurship may be in Bayona’s DNA as she is the daughter of a fourth-generation seamstress. With no extra cash for daycare, the single mother would take her child to her wedding alterations shop in New Westminster. “Like most Asian parents, she expected me to help out with the family business,” Bayona explains. “But from the age of 10, I really liked sewing. Plus, I got to play with all those special, beautiful fabrics, and I absorbed important things, like drape and fit.”

Those ephemeral and precious fabrics still spark her creativity, she says. Which is why she treasures her wood-railing-enclosed mezzanine aerie. Any space where she works can get a little messy, what with rolls of fabric and patterns everywhere. “Every dress starts with a fabric, perhaps a special lace, and I start looking for interesting things to do with it,” she says. “Crepe is my latest obsession. There’s just something inherently elegant about it.”

Crepe fabric features strongly in her latest elegantly minimal line, Aesling. Bayona’s chiffony Truvelle line continues to be a strong seller, as does Laudae with its slinky and sensual form-fitting gowns. A fourth line, Halseene, combines fabrics in ingenious ways to flatter the curves of plus-size brides.

Inclusiveness in fashion is a big issue for the designer and led to the 2018 launch of a modelling agency, Stranger Agency. When casting for her own photo shoots and bridal fashion shows, Bayona was frustrated by the offer provided by traditional agencies. They seemed to favour Caucasian models who wore a size two or smaller. With photographer Brian Van Wyk, also her boyfriend of three years, she started amassing a database of people of varying sizes and ethnicities with “really cool” looks.

“At first it was something we just did for ourselves. Now it’s officially a business,” she says.

Bayona still lives in the same Gastown building that birthed her first line of dresses, though in a different apartment. The fabrics and staff have been moved out, and boyfriend Van Wyk moved in two years ago. It took a while for her to adjust, and she admits decorating didn’t come naturally to her. Fortunately, the couple share a love for a minimal look, and took their time with the furnishings. They decided to hold onto a tall A-frame rack used to hang wedding dresses, now repurposed as a statement feature that frames the dining area.

The designer tries to spend as much time as possible at home, even indulging in the occasional Netflix binge-watching weekend. And this from an entrepreneur who once worked 14-hour days and slept on the work- shop floor to fill her custom orders. Although she has a very full plate in 2019, “I’m more excited than anything,” she says. “I just want to keep growing.” ●

I was finally going to the gym daily when the pandemic hit and shut everything. Before long, I started to...

Stew: A dish of meat and vegetables cooked slowly in liquid in a closed pan. Quintessential winter food. A pot...

During our cold, dark winters, it’s easy to feel a lack of enthusiasm towards life and work. When the light...