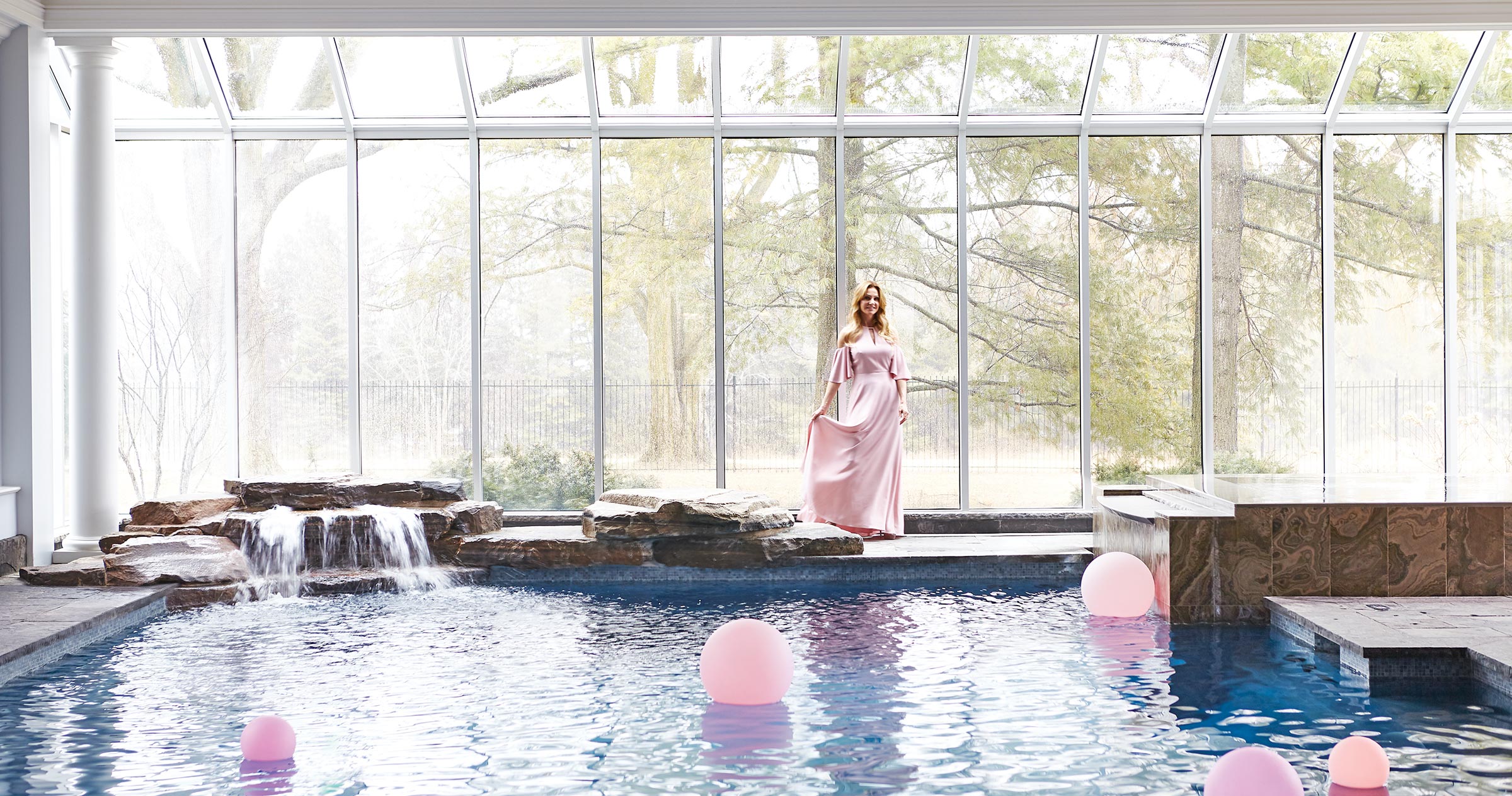 Slice network says its on-hiatus reality show Real Housewives of Toronto followed “six of the city’s most privileged, powerful and glamorous women as they navigate the elite social scene of Canada’s largest city.”  One of the show’s stars, Joan Kelley Walker, was most often shown entertaining in her downtown Toronto digs or taking the gang to the cottage compound in Muskoka.

From the reality show, one might think to find her in her downtown Toronto condo or home in Miami. But Joan spends most of her time in the red-brick King City country house she has lived in for more than 20 years. While a recent update to the interiors elevated its undeniable if understated chic, this is a family home to be lived in. And although Joan “tries to bring the fabulous” wherever she is, she would rather talk about her roles as dedicated mom, philanthropist and businesswoman. “I love fashion but also gardening.  I’m passionate about charitable work but I love Gucci, too. I turn my hand to home design but it’s often me who has to clean up what the cat left on the carpet,” she says.

A “small town girl” born in Saskatchewan, she feels most at home in this venerable Georgian-style manor, which is surrounded by rolling farmland. The house has undergone many updates, including one that upped the number of bedrooms to six from four. The most recent increased the kitchen’s square footage, added an indoor swimming pool, and expanded the master suite.

The home offers a retreat from the jet-set lifestyle so often splashed across society pages of this former model and television host. Photos focus on the celeb-strewn parties thrown by this legendary hostess and her husband of 18 years, Don Walker, CEO of Magna International. The couple have two boys, aged 15 and 17. Two young-adult children from Walker’s first marriage complete the household, which also includes two dogs and two cats.

“We have worked very hard for our money, and giving back is one of the most important and valuable things you can do when you have it,” Joan says. “I’m a big believer in giving back and making a difference.” Her charity work goes far beyond writing cheques and posing for pictures at fundraising galas. For the past 20 years, Joan and Don have been very hands-on supporters of World Vision Canada, for which Joan is an ambassador. They have traveled to Kenya, Costa Rica and many other countries where the agency works to improve the lives of children and their communities. The couple are also primary supporters of World Vision’s Starting Strong program that supports Cambodian women during and after pregnancy. For her charitable efforts, Joan has won several awards, including the Queen’s Diamond Jubilee Medal.

Joan tends to favour Canadian fashion designers and wears their creations proudly. And she is poised to join their ranks with her own eponymous label. Once it gets off the drawing board, the Joan Kelley Walker brand will highlight elegance in fashion with a humanitarian twist. More will be revealed shortly about the project she calls “a lifelong dream that fills my heart.”

As poised and fashion-savvy as she appears, Joan admits: “I used to be terrified of interior design until I learned to partner with the right person.” And for this renovation, she turned to designer Rhonda Thornton, owner and creative director of Bloomsbury Fine Cabinetry. “We’re also friends, which made it easier,” Thornton says. “Our design sense and the way we make decisions is similar, and we had some fun road trips to source products.”

The expansion of the house doubled the kitchen’s size to about 800 square feet. The dark and cramped original kitchen has been replaced by a stunning bank of cabinetry and two islands. What Joan calls the “kitchen table,” a large harvest table that has been in the family for many years, was relocated to the new addition, beyond which lies a formal dining room. The kitchen also features a separate lounge area with a pair of comfy armchairs, perfect for enjoying morning coffee and a beautiful view of the pastures outside.

A soft white colour scheme was chosen. “Joan wanted this to be a ‘little black dress’ of a kitchen,” Thornton explains, “timeless and classic with a look that could be changed with accessories.” To get that, the Bloomsbury English-style framed cabinetry, which harmonized with the home’s Georgian-manor style, was chosen.  The counters and islands are topped with rare Calacatta Gold marble, a soft white variety with veins of rich taupe and gold running through it.

It took a long search, though, to find the marble mosaic backsplash tiles in a diamond pattern to match the leaded-glass windows of the cabinetry above. The cabinets hold china and tableware that have also been in the family for years. Other heirlooms are on display throughout the home.

Portions of what was once the exterior brick wall were worked into the updated home’s design.

“Joan has a very keen design eye, but it’s also important to her that things be highly functional,” says Thornton. In the kitchen, for example, she loved the idea of tucking a ladder under the cabinetry’s kick base. It can be taken out easily and used to reach the top bank of tall shelves. Every post has storage behind it to conceal everyday items. And though the tufted wing-back counter stools appear to be delicate and satiny, their fabric easily wipes clean and is stain-resistant.

In a separate addition, an indoor pool was added. As with the kitchen, it features a glass wall open to the backyard, which is replete with mature trees. Joan loves that the pool features formal Georgian columns, a nod to the home’s exterior architecture. The Ontario wilderness is evoked by the pool’s deep blue lining and the black slate tiles surrounding it. A waterfall is found at one end and a fountain feature at the other. The family, who all enjoy swimming, can do a full water circuit there. Off to the side, there’s an infrared sauna, steam room, laundry area for towels, and dressing room.

The pool addition made it possible to expand the master bedroom and bath considerably. A new home gym now stands just outside it. The cramped walk-in closet that the couple once shared has become spacious his-and-hers dressing areas. Joan now has a main closet for her everyday wardrobe and a separate one for out-of-season clothes and accessories. There are also separate areas devoted to a vanity and another to store luggage. “It’s really gorgeous, a dream closet,” Joan says.

Yet for all her fashionista image, she spends much more time in the kitchen than in the dressing room. “The kitchen is so beautiful; I feel so good in here,” she says.  “The island is where everyone gathers and where we turn out so many good meals, have heart-to-hearts with the kids and make decisions, things that nourish the soul. This kitchen encompasses all that.” •