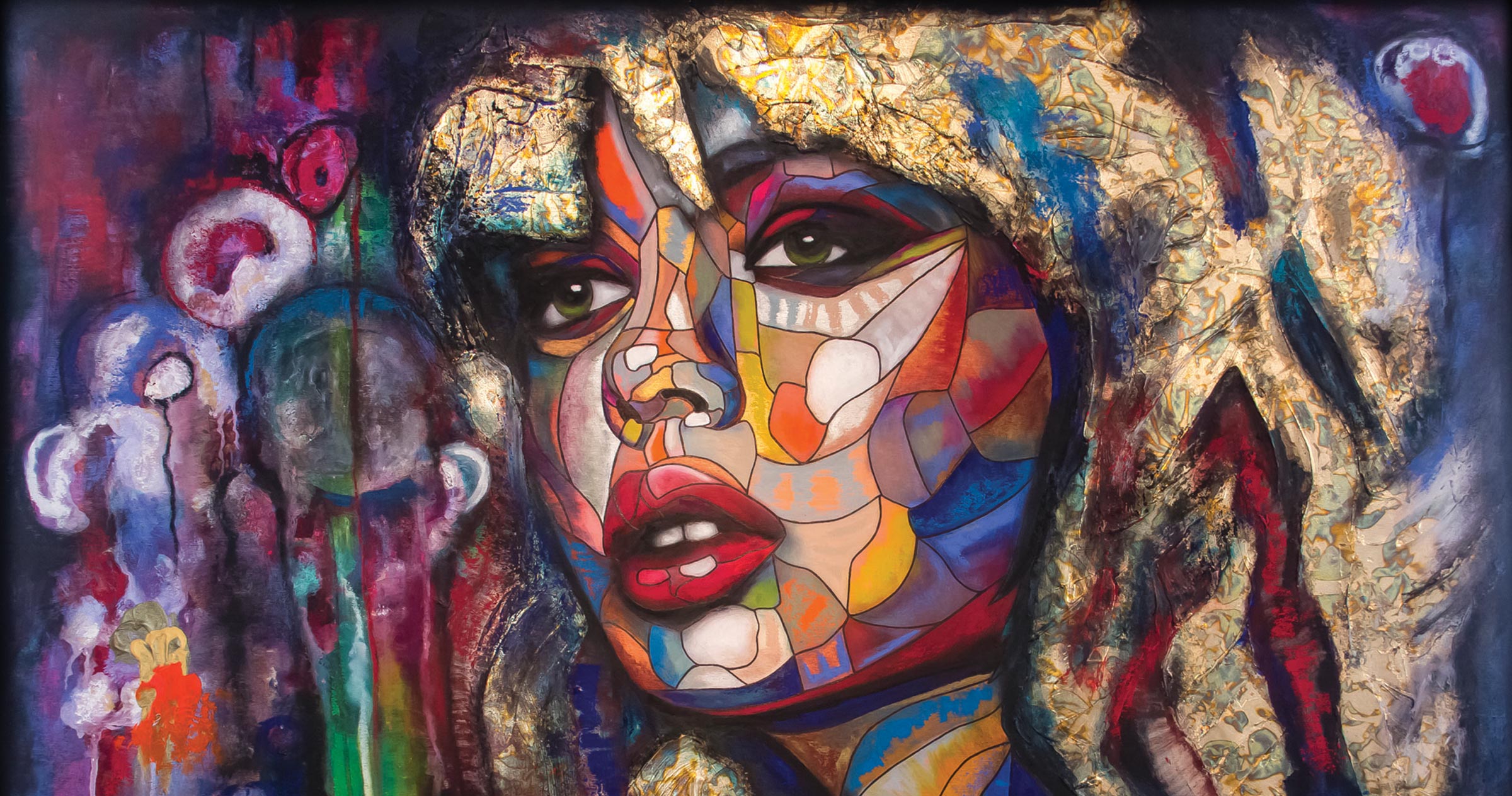 Aristotle’s idea of the whole being greater than the sum of its parts is what Anicko – a.k.a. Anick Bouchard – explores in her portraits.

The mixed-media artist, whose work is exhibited by Galerie d’art Le Bourget in Old Montreal, takes the notion a step further by delving into how fragments of our lives – encounters, experiences, errors, ecstasies – miraculously come together to form our personalities like the pieces of a jigsaw puzzle.

“I’m interested in how we piece together a new existence for ourselves every time we move to a new place, start a new job, fall in love…” she says.

Anicko delineates each of these aspects with the definitive lines and various colours reminiscent of stained glass. “I use colour and shapes to show how even small changes in our exterior world affect us internally,” she explains. “And brilliant elements reflect the parts of us that always shine, even in darker times.”

The various textures in her work represent the emotional layers that accumulate over time, strengthening us while we remain quite fragile in spots.

“I focus on positive women because that’s the energy that I want to put into the world,” Anicko says. “I want the people who buy my art to live with that positivity every day.”

Anicko studies as many as 50 different photographs of each of her canvases to scrutinize every angle. “The distance afforded by the photographic images helps me to see things in my art that I don’t always notice directly,” she says.

Her artistry first emerged in music. She left her native La Baie in the Saguenay as a teenager to study vocal technique for pop and jazz at Montreal’s Collège Lionel-Groulx.

Some Quebecers are familiar with her singing/song-writing abilities from her days with the Caniche Hara-Kiri group that she co-founded in 2004. “That’s also when I really started to get into stage makeup and costumes,” she says. Anicko so adored the transformative power of artistic makeup that she studied it at Montreal’s Collège Inter-Dec and then spent a decade collaborating with photographers and filmmakers as a professional makeup artist.

“I still feel I’m doing the makeup of my subjects but to reveal their inner beauty,” she says, adding that in her visual art she is raising the same sort of internal identity questions that she expressed with her music.

This comes across in the lighter visage of La Mise à Nu, which gives the distinct impression of an emotional mask having been removed to lay bare the force and fragility of a woman’s face.

Upon returning to the Saguenay, Anicko studied Art at l’Université de Chicoutimi and started to have her work exhibited upon graduation three years later. She can hardly keep up with the demand for her original works and limited prints now.

“I try always to be very mindful of my own mood when I’m in my studio because I know that it comes across in my art,” she says. “It’s why I’ve changed my way of life significantly in recent years – to convey and champion a positive outlook of the human spirit instead of the earlier chaos I lived.”

Admirers of Anicko’s work have noted that the subjects in a number of her paintings resemble her. In some cases, she may have subconsciously painted one of her three sisters who looks like her. In others, she acknowledges that aspects of herself may have unknowingly emerged in the powerful women whom she wants to portray from diverse cultural backgrounds.

The geisha in Battement Dailes emerged during a particularly amorous period of her life, while she’s uncertain of the origins of the aboriginal spirit found in Le Sentier, except that it portrays a woman who is clear about her life path.

“It’s difficult for me to discuss my art because I’m no longer in that frame of mind or mood once a piece is done,” she says.

With the exception of a man resembling her brother-in-law in Nous, all of her portraits to date have been of women. “And I really hope to feature women from yet other cultures,” she says.

“I’m thinking of painting children next,” she adds. “I’m curious about how the ‘jigsaw’ pieces of a child with a pure, instinctive outlook on life might look.” •

Anicko’s work can be viewed at Galerie d’art
Le Bourget: www.galerielebourget.com and on the artist’s website: www.anicko.net.

Soft, Rosy, And Chosen To Respond To Our Core Needs