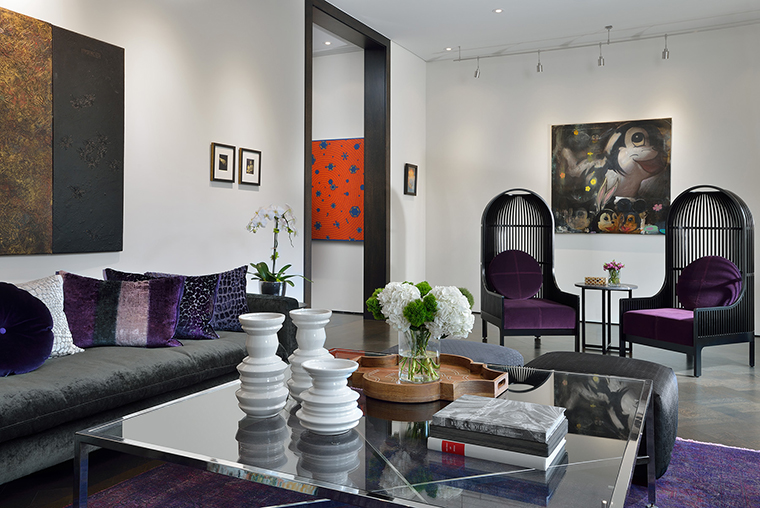 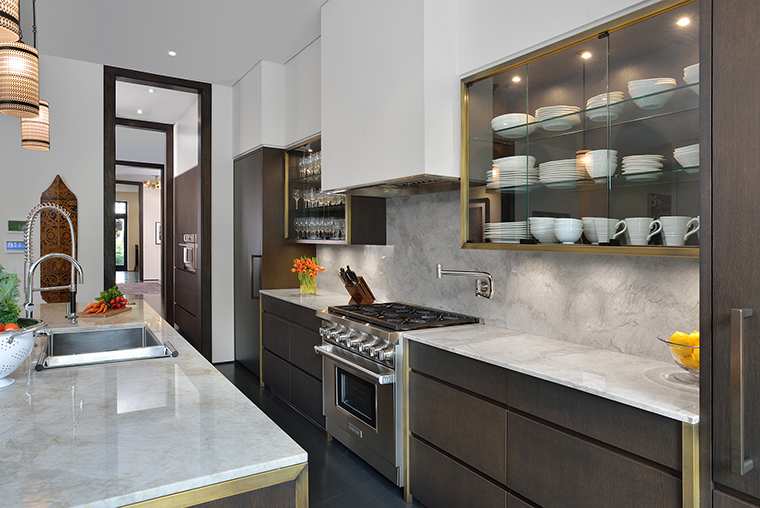 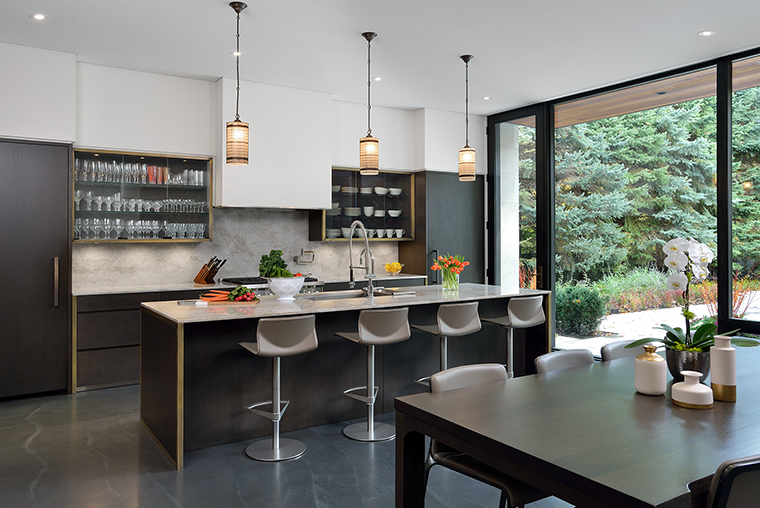 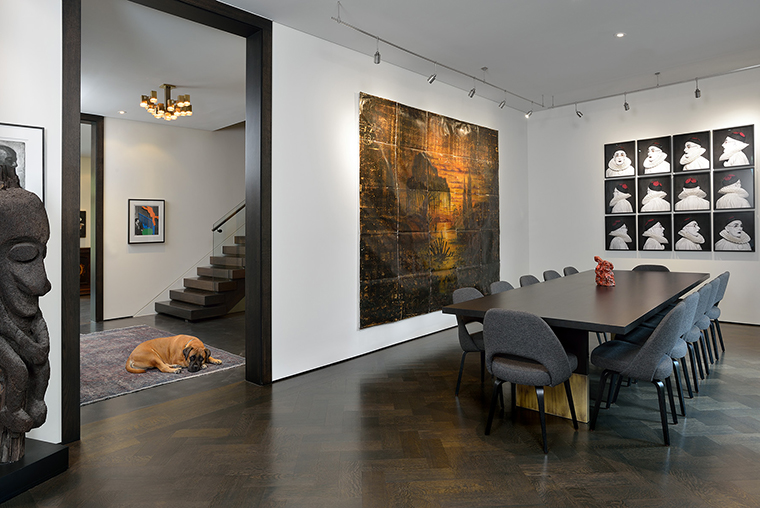 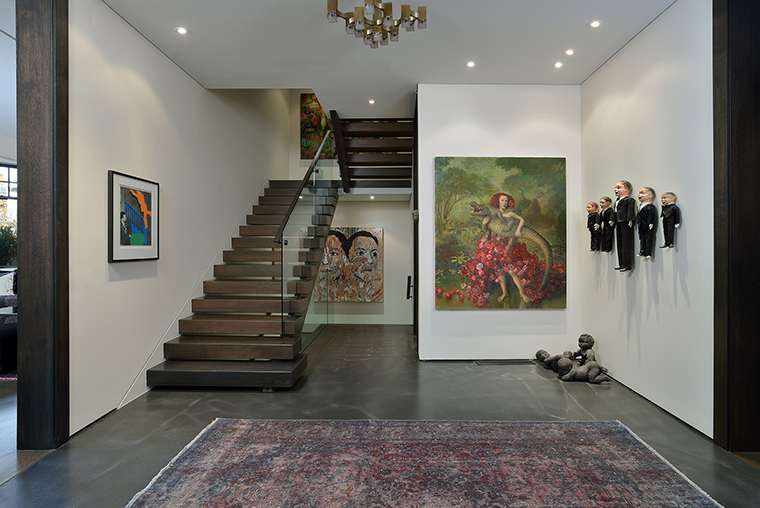 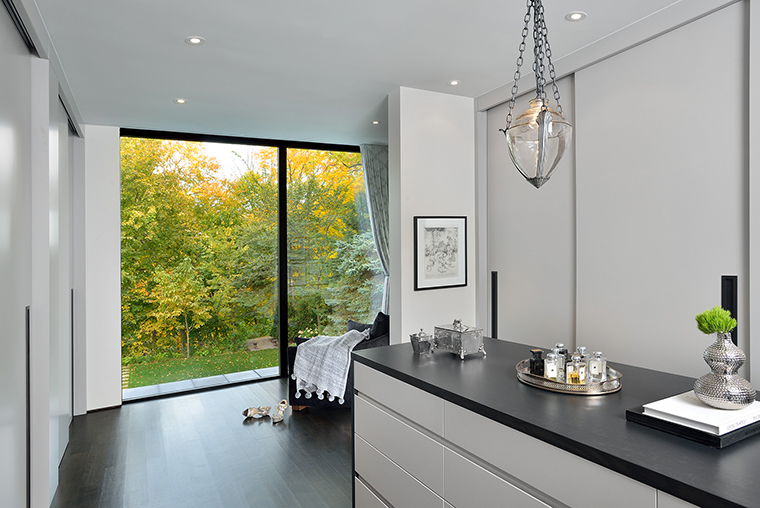 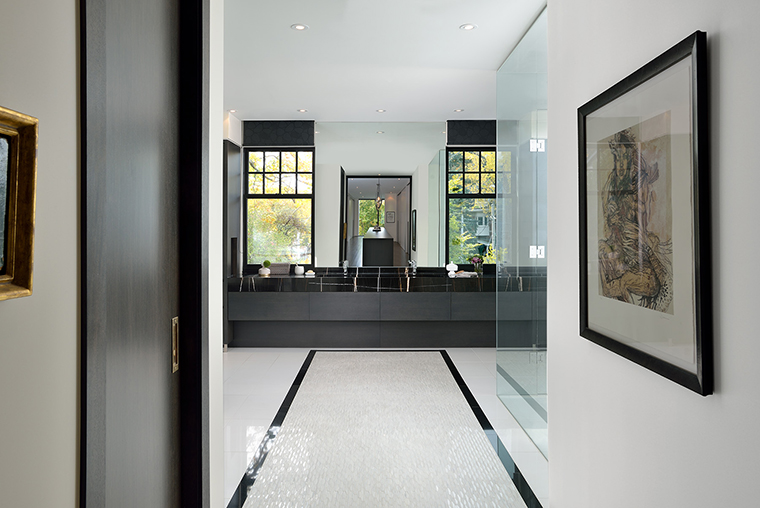 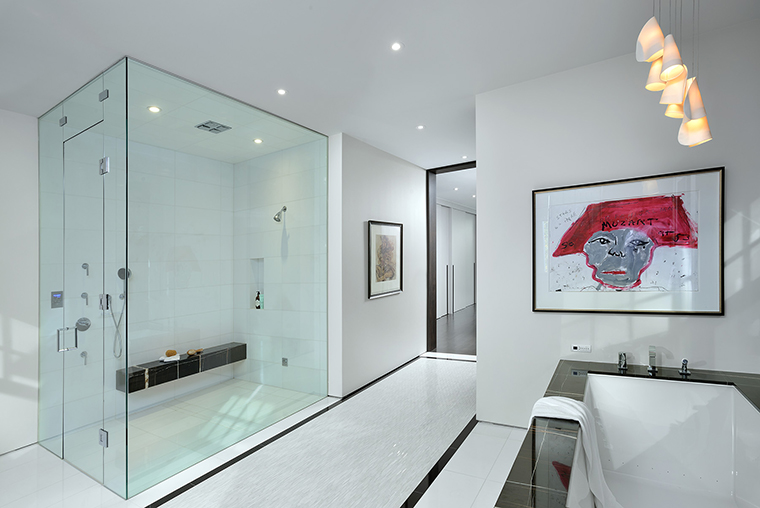 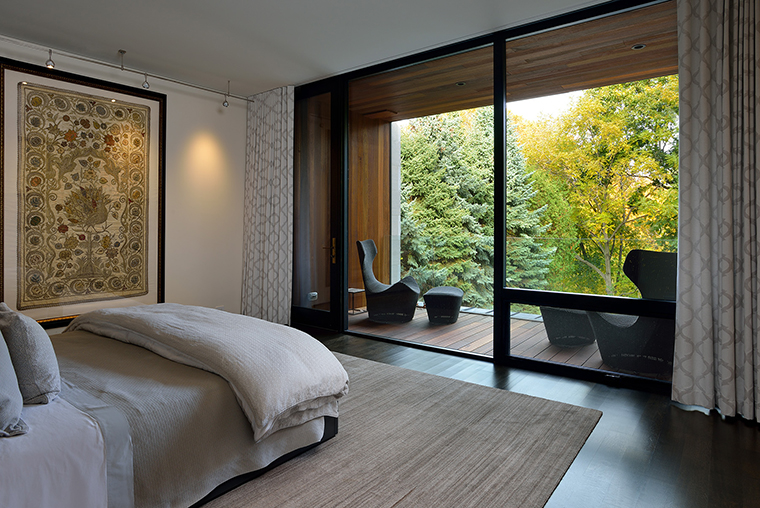 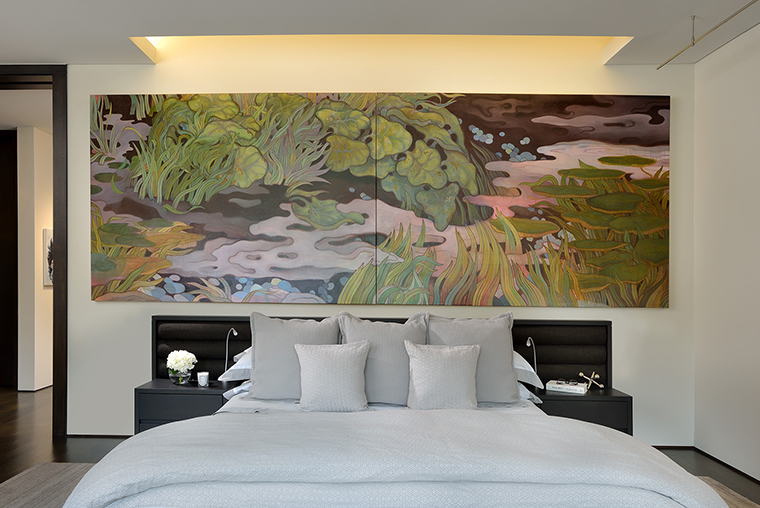 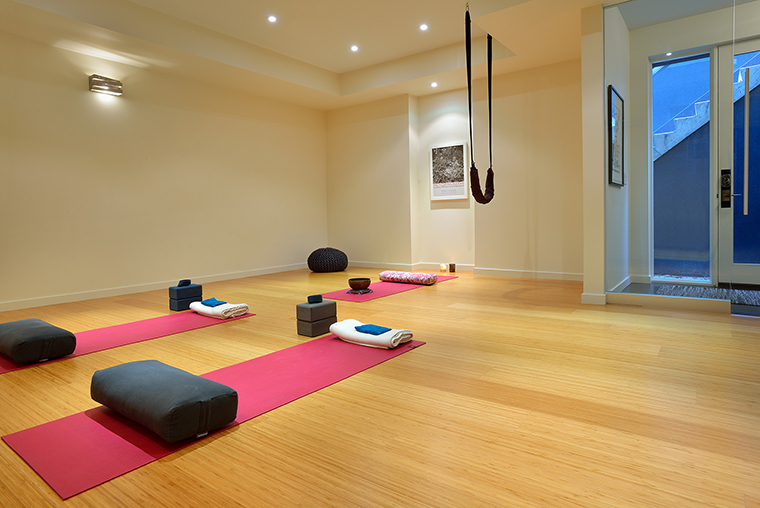 AN ARTFUL CONSTRUCTION
Family home is cozy, liveable, and a showcase for art

What constitutes a work of art, and how does one account for its allure? One could name various criteria – creativity, colour, form, content – but, in the end, it comes down to the artist’s vision and execution of a piece, and the viewer’s appreciation of it.

Viewer appreciation is well accommodated in this Rosedale house. The blank walls, high ceilings, generous lighting and streamlined trim all contribute to making it ideal for displaying the owners’ collection of contemporary art.

But first of all the house is a home, and it has been a home for more than 100 years. It was renovated several times, but when the current homeowners saw it for the first time, it had been neglected for decades. The site was what drew them: overlooking a ravine, it offered privacy. The homeowners love the location; “It’s like being at the cottage,” says one.
Indoors, the Edwardian-era house left much to be desired. Successive renos had done their damage, and there were few architectural features worth saving. After a lengthy approval process because of its heritage status, the house was gutted. The back wall was demolished, but the remaining three walls were kept.

“We maintained the historic look of the home,” a homeowner says. “The goal was to make it look like it was always meant to be there. We kept the symmetry. The front part is old, but the back is completely contemporary.”

With three storeys above ground, the 6,000-square foot home is built for ease of living; all five bedrooms have ensuite bathrooms. The ground floor comprises living room, dining room, kitchen and den – plenty of room for the homeowners to entertain or to simply be cozy with their two young-adult children.

Architect Stuart Watson of Drawing Room Architect Inc. also ensured that it was built for ease of viewing. “He gave a great deal of consideration to our art collection, with enough walls, proper lighting, and height,” one of the homeowners says.

High ceilings and artwork on the walls tend to draw the eye up, but there’s another aspect to this home that also draws the eye down. The rugs are an integral part of the story, works of art in their own right.

The owners chose Weaver & Loom to help them find the perfect floor coverings that would complement, not fight with, their art collection. And it couldn’t be done piecemeal. “Each room has to stand on its own, but we also had to think of the house as a whole because it must have flow,” says Ali Ghassemi, creative director of Weaver & Loom.

Ghassemi also had to think about durability. “A lot of people go through the house,” he notes. “In addition, the family has two dogs and two cats that have access to the entire home, and we selected pieces based on spaces they like to frequent the most. We kept aesthetics in mind but also practicality and durability.”

Such considerations led Ghassemi to recommend a Persian Bidjar for the front entry hall. He refers to Bidjars as “rugs of steel.” They’re double-knotted, with dense and thick pile. This permitted Weaver & Loom to give the rug a distressed look while keeping it structurally sound.

The company’s process of distressing is not superficial. Rather than being given a simple overdye, rugs are immersed in vats of colour and “cooked” so that, instead of being supersaturated on the surface, they have depth and dimensionality. In this case, the Bidjar was given a black treatment but, says Ghassemi, “the rug has so much colour itself that, after sun-bleaching and fading, the red and lavender tones come out. This rug and the one in the living room – a traditional Persian Kashan – were extremely patterned. We selected for texture and construction, then toned down the print and colour by distressing and fading them.”

Weaver & Loom specializes in custom-made rugs, but sometimes off-the-rack works well. The corridor leading from the second-floor landing to the master suite is long and narrow and was the perfect spot for two Afghan kilims woven in the 1970s. “We’re a family business, and we inherited lots of gorgeous pieces from my father’s purchases way back when,” Ghassemi says. “These are sister rugs, very traditional, that work beautifully in a modern home.”

The basement (another 2,500 square feet) also has a long, narrow hallway, and here Ghassemi was able to repurpose a rug already owned by the family. The Moroccan flat-weave had been damaged, but Weaver & Loom did a full restoration. “When we go into a project, I always ask the client ‘What have you already got?’ ” Ghassemi says. “Sometimes they don’t know what can be done with a damaged rug.
“This entire project was a lot of fun because of the unique challenges. And it was a pleasure getting to know the family, to get into their thought processes and understand the look they wanted to create.”

The homeowners say that choosing rugs was a challenge because they had to keep the art front and centre while making the home warm and inviting. “Ali put a contemporary spin on classic rugs,” says one. “We try hard to make our environment not reflective of what’s popular at the current time. We want something timeless. The house is about who we are and our aesthetic leanings.”
It’s also about sharing with others, the other homeowner says, noting that “there’s a flow to the rooms. We can have cocktail parties for 60 people and it doesn’t feel crowded. We can have 20 or 25 members of the family over for dinner, or have an intimate dinner for 10; it still feels as cozy. It’s a very nice house to have people in, and that’s very much what we’re about.”
Adds the first homeowner, “This is the fourth time we’ve gutted a house and renovated it completely. I love doing that. For me it’s a wonderful creative process. I think we got it right this time. I like living here a lot. Everyone else likes it, too: kids, cats, dogs. There’s a very nice energy in this house.”