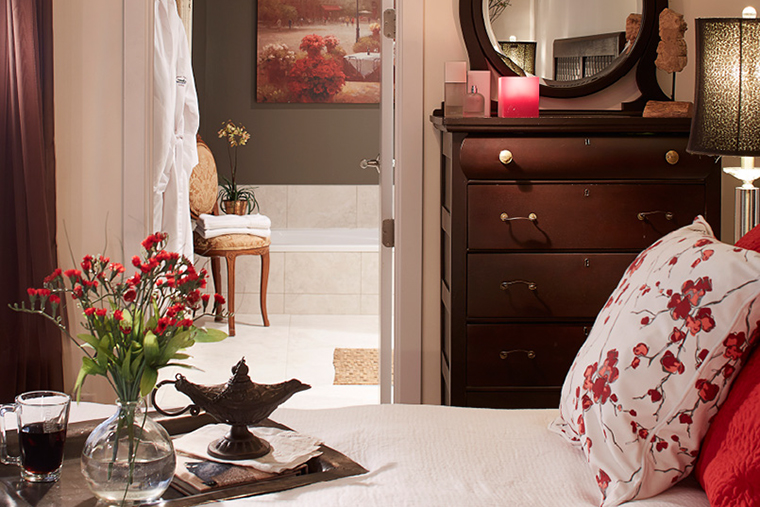 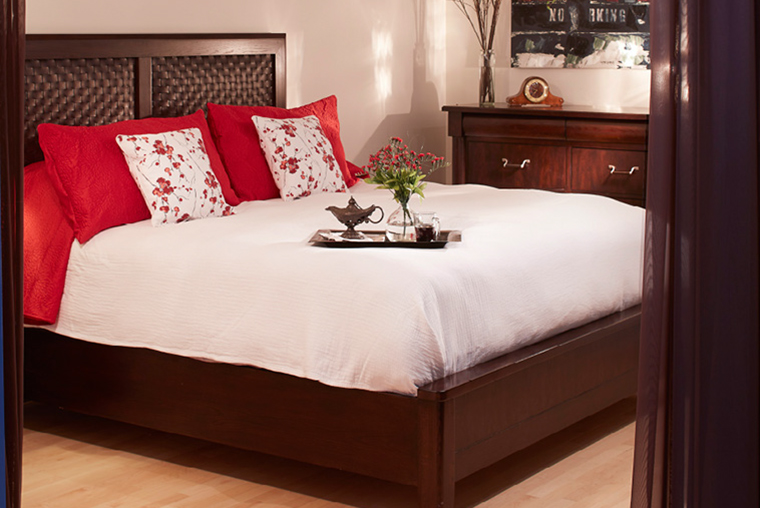 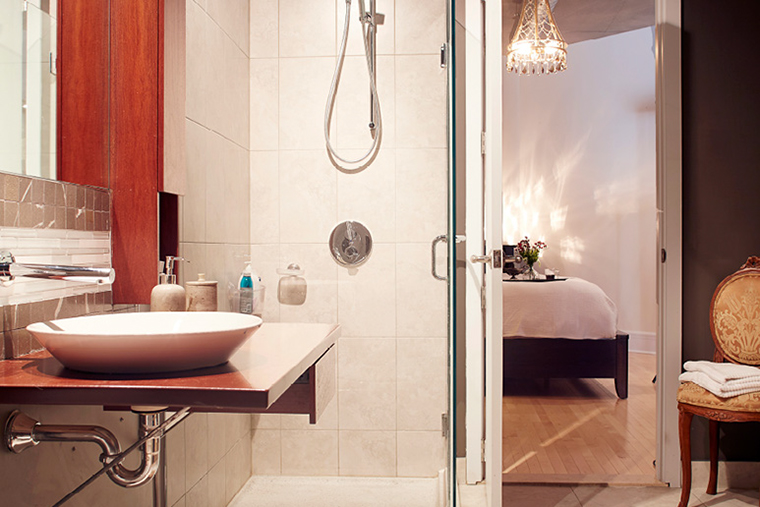 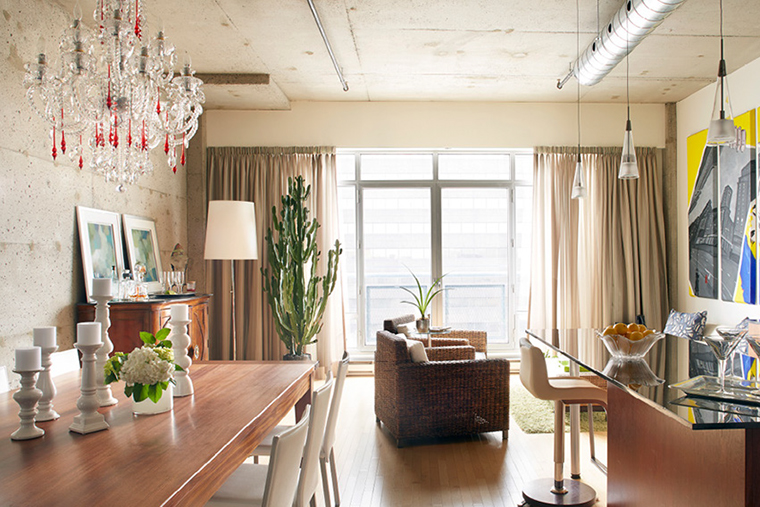 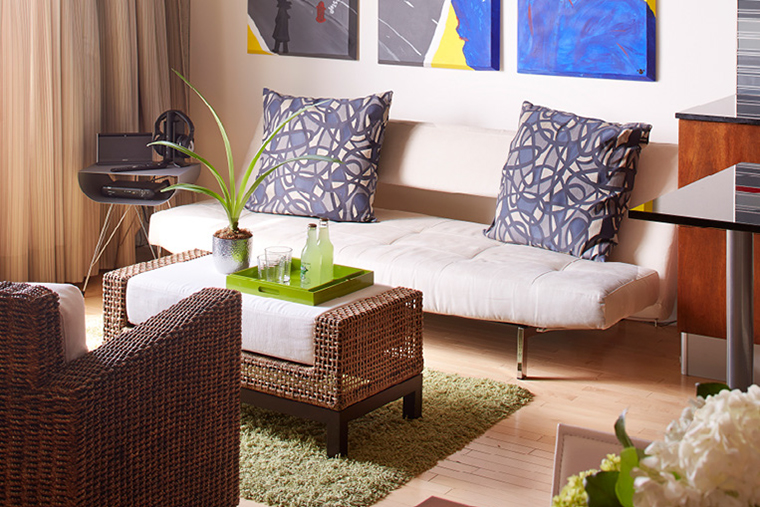 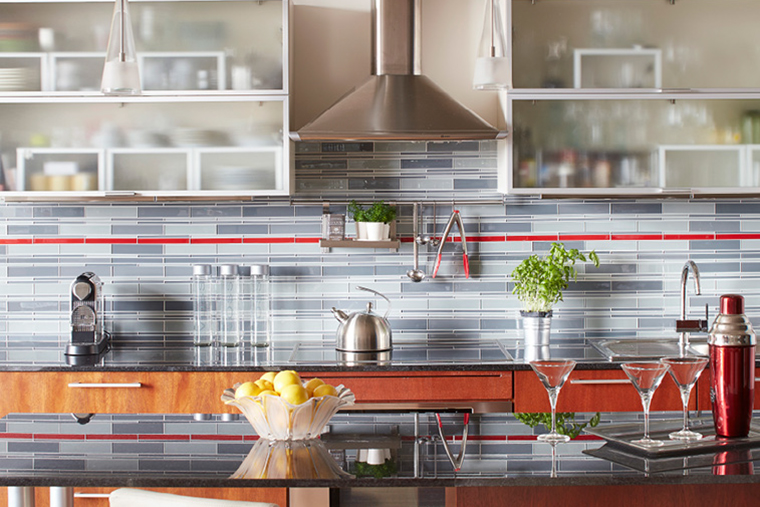 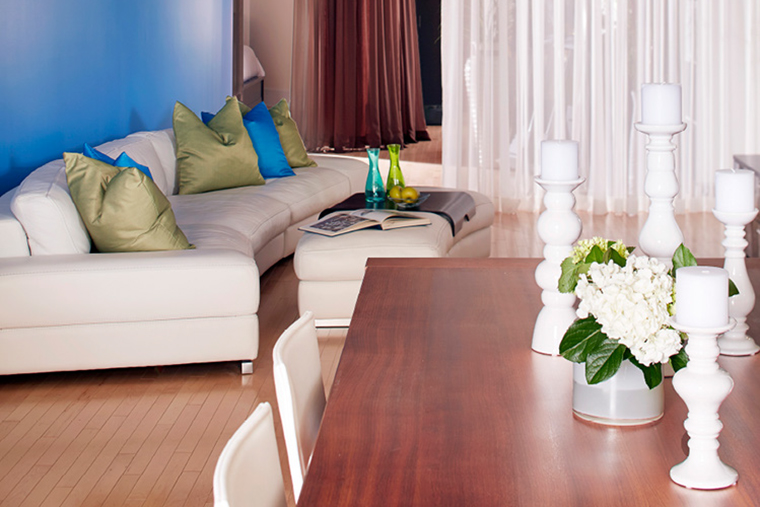 The proximity of a condo to the dining, nightlife and cultural activities of downtown Montreal sold Salvatore Falci and his partner on a project in the Plateau. And they were especially smitten after they saw the views overlooking a corner park, Mount Royal and downtown buildings.
“We love being able to leave our cars in our indoor garage spaces and walk everywhere,” says Salvatore, a hairstyling instructor.
They admired the 1,236-square-foot unit’s high ceilings and windows, but sought a warmer, homier atmosphere than is typically achieved by minimalist loft decor. They also wanted to retain some treasured furnishings, including an antique dresser that Salvatore had bought for his first apartment.
Rather than erect walls, they created bedroom privacy by installing sheer chocolate-coloured curtains with a cotton lining. Additional warmth is derived from the walnut finish of their bedroom set, including a distinctive woven-leather headboard. “I found the exact red I wanted for the bedroom pillows and cushions at the Linen Chest around Valentine’s Day,” Salvatore says.
Touches of the same red are seen in the teardrop-shaped Christmas ornaments in the glass chandelier above the dining table. “I had a friend sew a silk covering for the chain,” Salvatore says. “It attaches with Velcro so it can be removed for cleaning.”
A mirror by the dining area reflects more red in the form of vibrant tile strips on the opposite wall, where they are incorporated into a glass kitchen backsplash. “We wanted that red in a subtle yet distinct way,” he says. “So we took all of the tiles off their backing and spent 27 hours individually placing them ourselves.”
A similar artistic initiative is evident in the bathroom, where the condo’s beige Italian tiles were given added character; the couple pieced together remnant marble tiles from a previous renovation project on the backsplash. The mahogany counter that supports the sink and the wood medicine chest echo the bedroom set’s warm tones and contrast with lighter, distressed wood on a wardrobe imported from Indonesia, which serves as a linen and storage closet. The bathroom’s antique chair was a garage sale find.
As much as Salvatore adores red, he also has a penchant for blue. His favourite blue is Pantone 300. “I just find it so calming and relaxing with its sky-like qualities,” he says. The couple painted the curved wall in their formal living area in that precise shade. The blue nicely contrasts with a white leather sofa from Roche Bobois that contours the wall perfectly and comfortably seats eight – and up to 10 with a squeeze.
A couple of the cushions are a perfect blue match while the others reflect the den’s urban greenery. Vases atop the curved wall remain safe from the cat and enable natural light to filter through a window into the bathroom. A tray from EQ3 allows the footrest to double as a coffee table. The ultra-luxurious sectional is opposite a mounted 52-inch television set.
The dining area boasts warm earth tones with its jatoba hardwood customized table that sits up to 14 guests. The white leather chairs provide comfortable seating and are light enough to be pulled from the table without damaging the floor.
Nearby, three white leather island stools provide a contrast to the black granite kitchen counters. Mahogany finishes on the lower kitchen cabinetry is lightened by the frosted glass on the upper doors.
Because the homeowners eschew microwaves, they opted instead for a Bosch oven with induction heat that quickly warms up. The oven is a standard width but slightly lower than usual to appear less obtrusive and to satisfy the couple’s goal of minimizing the visibility of appliances. A customized mahogany panel likewise hides the dishwasher.
Vases atop the kitchen cabinets are glued in place to prevent the cat from knocking them down. Partially filled with sand they frequently contain seasonal flowers or holiday decorations in the couple’s favourite red.
The corner by the large window serves as a cozy den with a sofa that converts into a bed for overnight guests. “I looked everywhere for pillows that wouldn’t slip off the couch and finally kept the ones we had but recovered them in faux suede that stays in place,” Salvatore says. The homeowners enjoy the sunny area and its abundant natural light. A 32-inch television is mounted on the wall behind the curtains and is conveniently pulled out when required.
All of the design elements combine to ensure that the couple continue to love the home they were so smitten with at first glance.