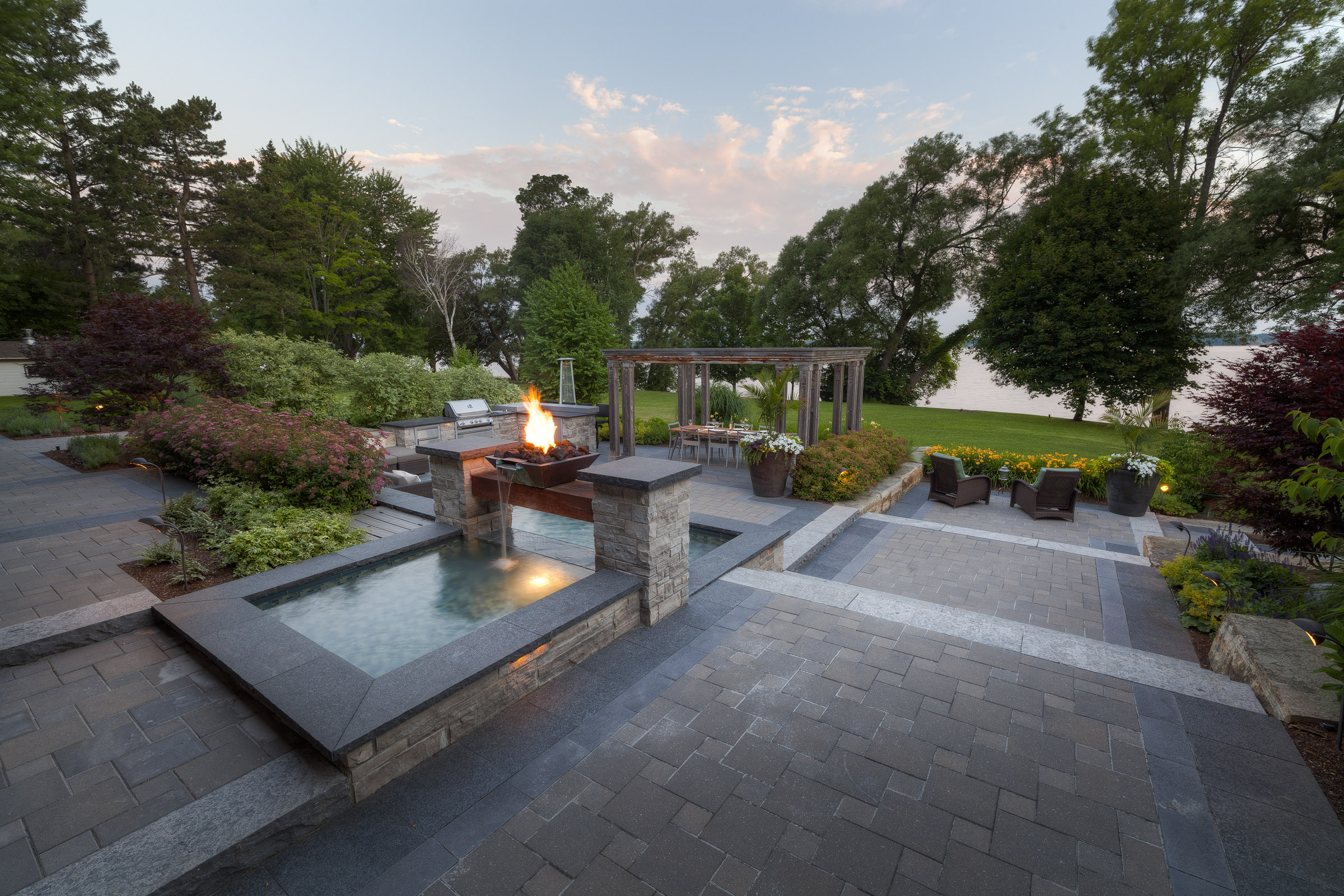 Views of the Water

A once-overgrown shoreline garden is redesigned, rebuilt and opened to vistas of Lake Ontario

Kim Lander knew that the property she was buying in 2007 would require work.

Situated on the Lake Ontario waterfront near Bellevillle, the five acres of land were overgrown with trees and shrubs. Kim couldn’t even see the lake through all the vegetation.

She felt as if she were landlocked, not a comfortable feeling for the owner of a waterfront property, especially for such a lifelong sailor as Kim.

A past commodore of the Bay of Quinte Yacht Club, Kim undertook to connect her property to the lake through a renovation that had as its centrepiece a landscaped link between her home and the lakeshore it sits on. The first step was restoring the mid-20th-century, 5,000-square-foot house.

When that was completed, Kim met with a local landscape-design company to create a garden that would fit with her vision of linking the house to the bay.

“The whole point of living on the water is to see the water,” says Kim, recalling her first meeting with Scott Wentworth, owner of Wentworth Landscapes. “You couldn’t see the water from the living room. I told him, ‘Obviously, I want to see the water,’ and that I needed a big entertainment space. I also told him I wanted a few private areas where you would want to stop, read a book, relax or meditate.”

First to go were the overgrown shrubs that blocked the view of the water and the small patio against the back of the house facing the lake. But the core challenge for Kim and Wentworth when it came to rebuilding the hardscape was how to deal with the height gradient from the house down to the water.

Kim wanted a patio large enough for entertaining big groups, one with a dining area and a custom-made pergola, cooking facilities, a bar and a water feature.

She also worked out with Wentworth a design that ultimately produced a two-tiered decorative pool, which is filled by a large fire bowl that has a spout on its base from which water flows and fills the upper of the two pools before cascading into a lower and larger eight-by-15-foot pool below.

The gradient challenge was met by placing the main patio on one level at mid-slope, and by adding two sweeping staircases, one on each side of the interlocking-stone patio to allow people to move from the house to the waterfront.

As Jason Partridge, another landscape architect on the project says: “We needed to make sure the landscape was as impressive as the house. The garden is an extension of their indoor living space.”

To the end, Partridge says, the design team pulled out all the stops when it came to what became known as the serenity garden.

Kim had asked for a quiet place where she could meditate and practice yoga. She had chosen pink sand for the garden’s circular floor and even ordered a teardrop-shaped hanging chair called a NESTREST.

However, there were no trees from which to suspend it.

Partridge says they fixed that problem by introducing a mast and sail to do the job, and for extra flourish they put Kim’s racing boat number, 36, on the sail. “It was perfect,” he says.

Kim agrees. “They really came through with the details. They did a fantastic job,” she says, adding that she was initially attracted to the property because she saw influences of the famous architect Frank Lloyd Wright in the steel-post-and-beam house, and she loved its waterfront location.

But after painstakingly restoring the house close to its original 1952 state, she says, she wanted the exterior of the property to meet the same exacting standards.

Although she has no idea how the grounds may have looked when the house was originally built, she says the garden is a perfect fit and will weather the test of time.

That’s a good feeling, says Kim, a retired accountant, given that she is no longer the owner of the property. In 2014, she married her second husband in the new garden; together, they decided they wanted a smaller property.

They have built a new house not far away and a new garden with one element that she moved with her: the NESTREST and the sail with the number 36 on it.