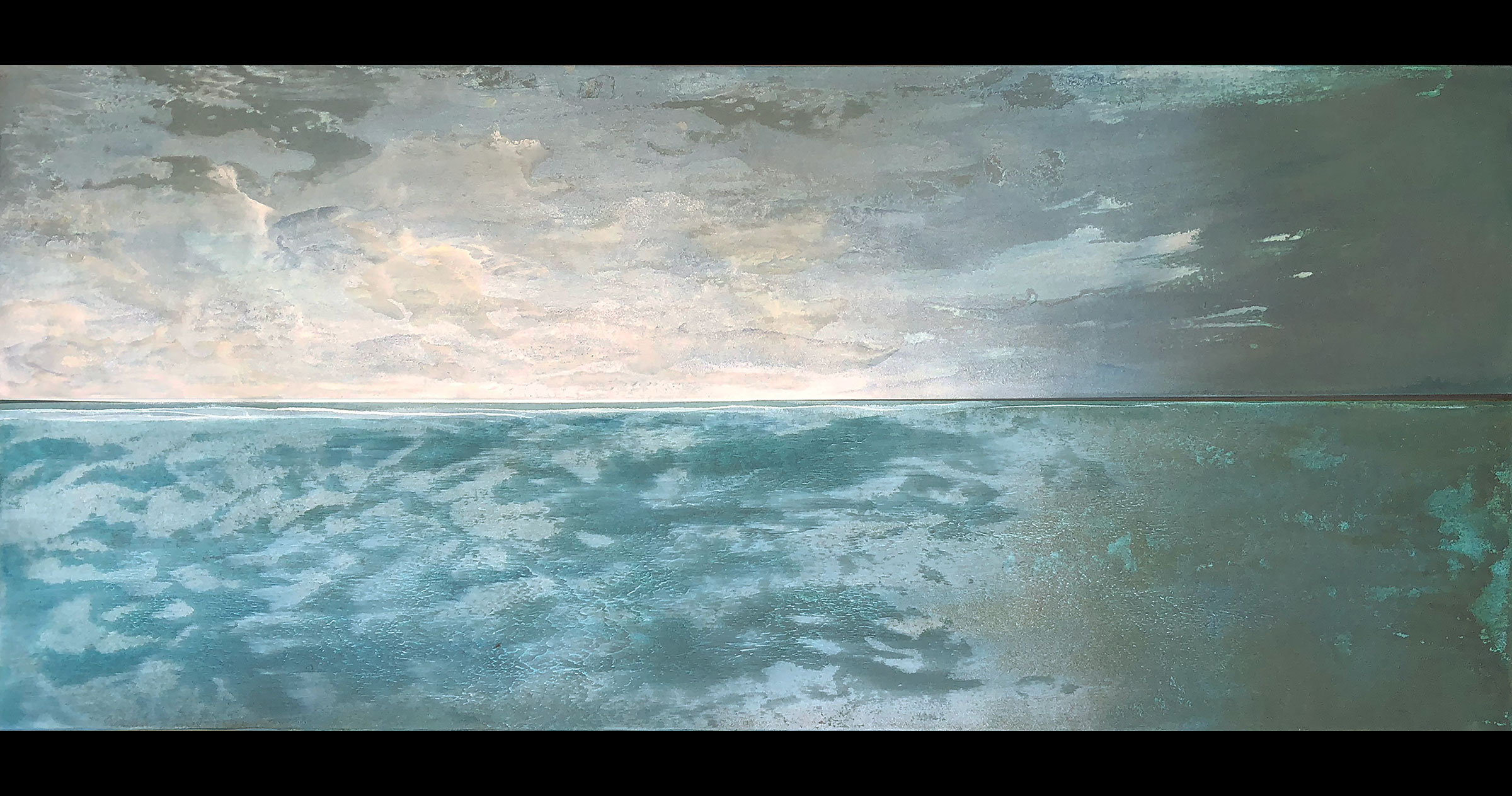 Sasha Rogers starts each blank canvas with a horizontal line across the middle and spends a lot of time getting that centre space just right.

“I love dualities,” the artist says. “You put in that line and have an immediate juxtaposition of two realities. The middle, for me, is a liminal place, a threshold between one world and another world.”

Rogers thinks of her work as a conversation between those three distinct parts: the upper, the lower and that all-important middle. It’s that line of separation that fascinates and holds the most meaning for her, what she calls “a placeless place,” something that attracts us, draws us toward it, but that we can never quite reach.

Viewers often interpret her paintings as landscapes or seascapes, with that centre line as the horizon. It’s an observation that used to surprise Rogers, since that’s not how she would see it while creating it or even when she looked at the finished work. Yet she seems to find the comparison between her art and the natural world gratifying. We tend to seek out nature when we’re sad or need solace, she says, and we look to it to renew and inspire us. “You can’t help but stand in nature and feel like a speck in the universe. It’s the human spirit longing for a higher connection.

“People often look at my work and say, ‘I feel like I’ve been there, but I can’t put my finger on where it is.’ Most people who live with my paintings say they have a huge emotional effect. I think that’s a huge compliment; I want them to have that experience.”

That theme of line and separation crept into Rogers’s work about 18 years ago, and she says she’s still driven to explore it and see where else it will lead.

Achieving effects that are evocative of light, cloud, atmosphere, water or waves can take between 40 and 50 layers of paint and as long as a month to complete. She works in acrylic, using eight to 10 kinds of media that all have a different viscosity – from thin to thick and goopy. She thins them to make them watery and ethereal, and keeps two large fans going in her studio to speed up the drying process between layers.

Once the canvas is dry, she often scrapes and sands it to achieve the look and texture she wants before adding yet more colour. Even with all those layers, there’s always a bit of raw canvas left in each painting, a small spot of nothing amid so much around it.

Rogers grew up in rural Saskatchewan with two artist parents: her father, Otto Rogers, is a painter and sculptor; her mother, Barbara Rogers, was a potter, weaver and jewelry designer. Sasha Rogers studied art both in her home province and at the University of Alberta before settling in Toronto with her husband, architect Siamak Hariri.

She taught painting and drawing at the University of Toronto for 10 years, but gave it up to devote more time to her own work, which she has exhibited in galleries and art fairs across Canada and the U.S. For the past decade, she has had her shows, including her current one, Lines of Longing, exclusively at Vancouver’s Kostuik Gallery.

As a teacher, Rogers used to amaze her students by being able to identify whether they had grown up in urban or rural communities, just by looking at their work. All their early visual experiences formed part of what she calls their “artistic DNA,” something both individual and inescapable. Their resulting art was, for Rogers, relatively easy to interpret.

Certainly, her own prairie childhood, with those vast expanses and seemingly endless skies, has imprinted itself on her own artistic DNA.

“I see space differently than if I had grown up in an urban environment,” she says. “Think of a prairie vista, white on white in the winter. It’s such a powerful thing.

“I remember, as a child, riding my bike, looking at the horizon, and thinking: ‘If I pedal really fast, I can get there.’ Of course, you can’t,” she adds. “Like that horizon line, the centre (of my paintings) is the space of longing because it doesn’t really exist. You can chase it your whole life, and never get it.” •

Artist Chantal Malek is a purveyor of colour and emotion. It’s impossible to look at a Malek canvas and not...