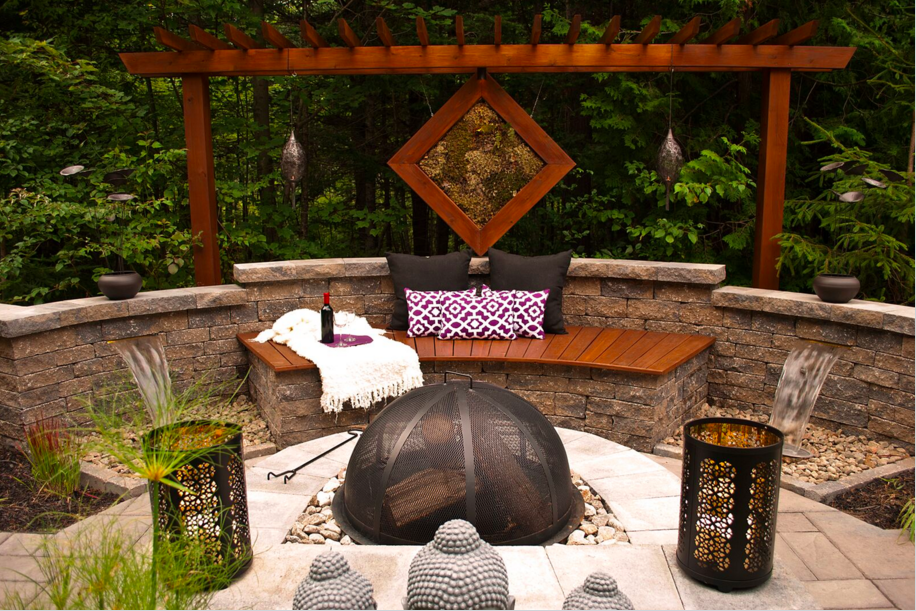 A TOUCH OF THAILAND 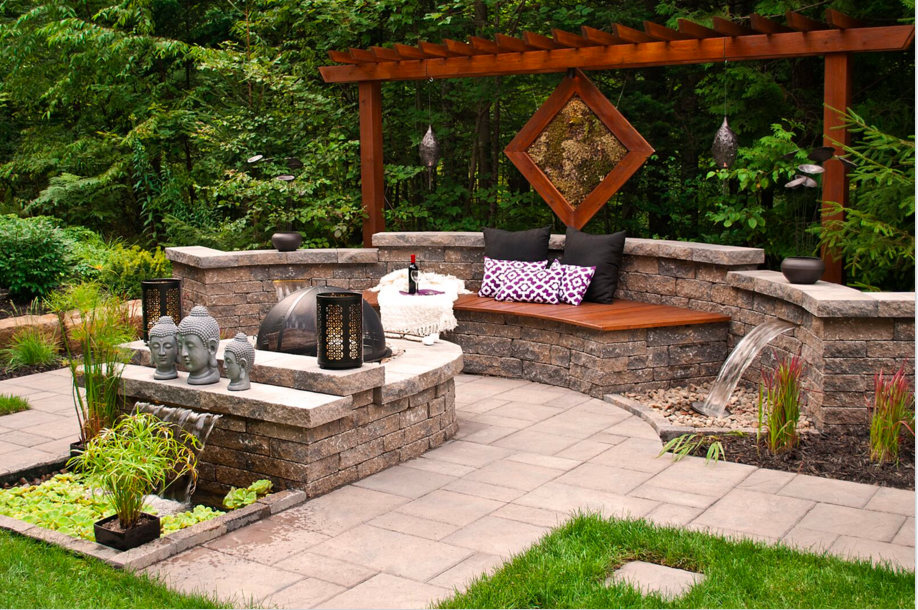 A TOUCH OF THAILAND

Practical whimsy creates a peaceful haven in a Terrebonne backyard

The soothing sounds of cascading water among Buddha heads and bamboo shoots are some of the natural elements that have transformed a Terrebonne backyard into a Thai-inspired oasis.

“We incorporated four small but separate water features, so the relaxing sound would carry throughout the space and into the house when the windows are open,” says Mélanie Coulombe of Plani-Paysage, who designed the garden; its construction was overseen by the company’s landscape foreman, Benoit Bleau. “The meditative semi-circle is located to be in full view from the kitchen, dining area and family room so that its tranquility can be appreciated even when it’s raining or too chilly to sit outside.”

The large and densely forested backyard inspired Coulombe to play with a gamut of foliage rather than introducing flowers. “Limiting the amount of exotic plants to smaller areas or containers also makes them affordable to replace if some don’t survive the winter either indoors or out,” she says. 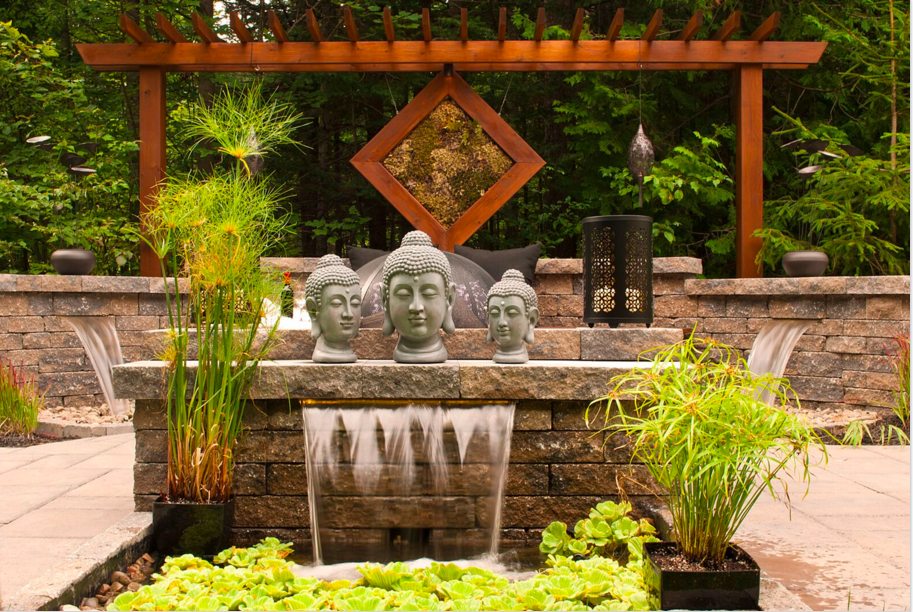 Bricks, stone and pebbles winter favourably, while the cedar seating and pergola add a warm richness. “The diamond focal point is filled with various mosses from the forest to provide a further array of greenery,” Coulombe says. “The permanent seating is practical and instantly made cozier with a few cushions.”

Overhead lighting discretely installed within the pergola gives the area a magical glow in the evening, as does the fireplace. “We also installed smaller lights under the floating plants in the central mini pond so that water shimmers along with the water flowing onto the rocks on each side of the main seating,” Coulombe says.

While the homeowners adore the meditative space, there are times when they want their family and friends over to party heartily. The scarlet cushions, lanterns and cooking utensils on the main deck say it’s perfectly fine to get a bit loud during afternoon barbecues or evening soaks in the hot tub.

Yet the space playfully integrates a transition to the quieter retreat with a bright red lotus made of porcelain juxtaposed by a pure white living bloom on the coffee table at the top of the deck. Glazed scarlet pots filled with frilly greens and towering bamboo sticks are contrasted by a quieter trickling bamboo fountain that spills into a container filled with aquatic vegetation. Other pots contain papyrus.

The bright oval seating on the lower deck provides an ideal midpoint between the active living area and the serene location. The ambience of a smaller but still warming fire is created with the flick of a switch. “It’s great for when friends drop by for just a little while,” Coulombe says. 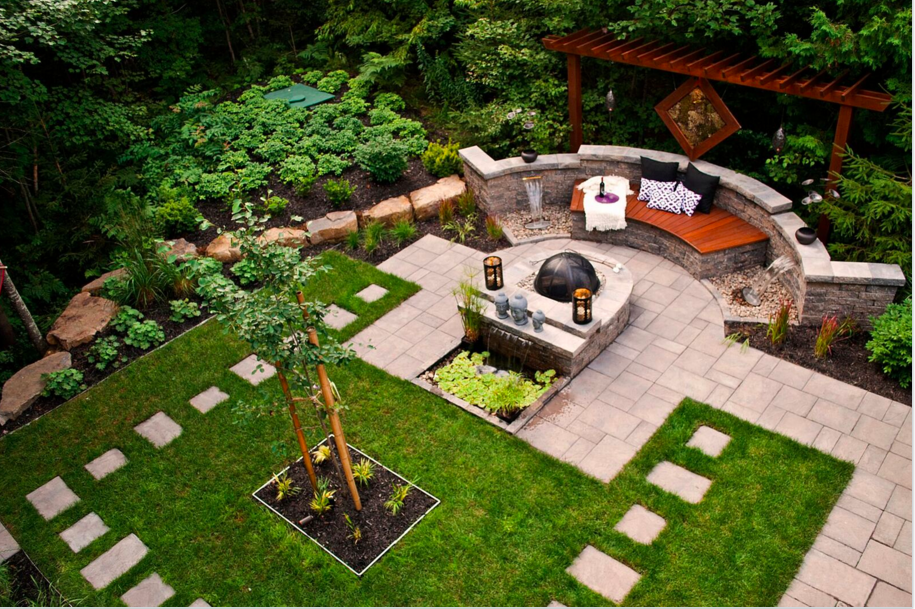 Wall sconces on each side of the patio doors, and lighting within the deck stairs cast a glow on the spirited red pots and help everyone to safely navigate the space without any obtrusive brightness.

All of the decorative accents are fairly rugged or relatively inexpensive, so if a raccoon or squirrel decides to endure the karma of knocking over a Buddha head or a sound bowl, it’s not the end of the world for the animal or homeowners. It will also be easy to refresh the space – and even give it the flavour of an entirely different Asian country – down the line with new ornamental features.

“The retreat is an example of how you can landscape a small area of a huge property to redefine the entire space in a truly unique way,” Coulombe says.

Her clean design and construction of the Thai-inspired retreat minimize necessary maintenance, leaving the homeowners with a lot more time to enjoy their oasis in contemplative bliss. 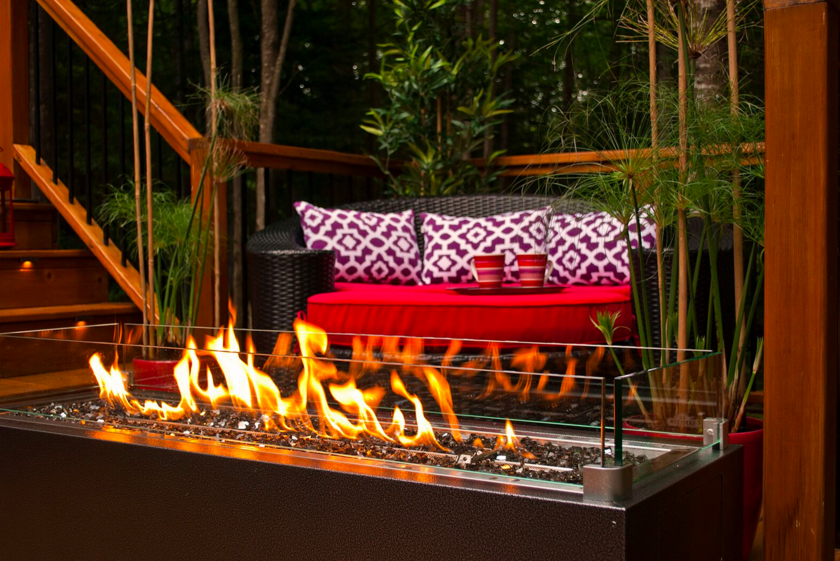 EUROPEAN STYLE IN A MODERN HOME