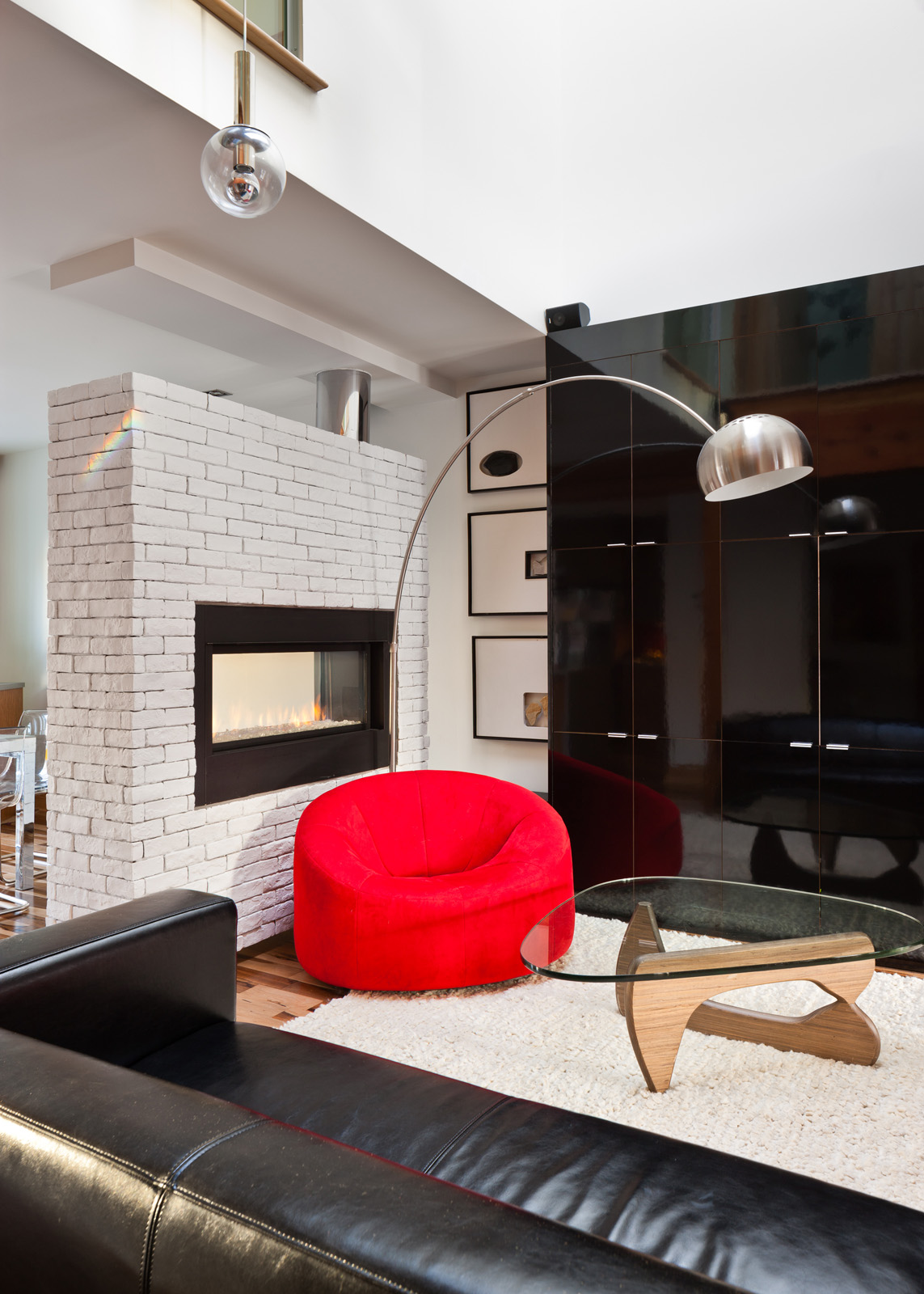 A Rosemont duplex is flooded with sunshine after it is transformed into a single-family home.

Mélanie Laberge and her husband Robin wanted to transform their two-storey duplex in Rosemont-La Petite Patrie into a single-family home.

Moreover, they wanted the home to be filled with natural light.

Montreal architect Eric Tremblay managed to give them that and more, with a redesign that transformed the duplex into a quirky single-family, two-storey home with a rustic but also contemporary, urban ambience.

Among the transformative architectural additions: exotic Brazilian hickory flooring; a staircase fashioned out of a 100-year-old maple tree; an oversized skylight; a two-sided fireplace; and a room divider made of elm trees chopped down on the couple’s St. Hippolyte cottage property.

“They wanted to bring their experience of nature into the city,” says Tremblay, the founding owner of Boom Town, a Montreal architectural firm and the architect responsible for the redesign. “They love the outdoors. They wanted things opened up. They were afraid of not having enough natural light.”

Mélanie likes the urban rustic ambience. “It’s modern, but very warm because of the materials that have been used,” she says. “We have sunshine all through the house. I look up from the living room (on the main floor) and I see the sky. It feels as though we are almost outside.”

The building already had a skylight, but it was small, and it provided light only to the upper floor. To bring more light inside and down onto the ground floor, Tremblay installed a skylight that measures four-by-eight feet, and he had a similar-sized opening cut into the floor on the second storey.

It was a simple idea, he says, but it made a big difference to the house. Natural light now streams down through the second storey, which contains a home office and all three of the bedrooms, to the living room below.

The second big idea that gives the house its special charm is the use of natural wood. As part of the redesign to a more open concept, several load-bearing walls were removed on the main floor.

In their place, Douglas fir beams were installed to carry the weight of the second storey and to add the warmth the homeowners desired.

Also warming up the space on the ground floor is an unusual room divider made from tree trunks.

Three elm trees cut down on the homeowners’ chalet property were cut into sections and then installed ceiling-to-floor to make the faux forest that separates the children’s play area off the living room from the front hall. Mélanie’s brother, Bruno Laberge of Laberge Constructions, also the contractor for the renovation, cut the trees himself.

Another standout feature is a rough-hewn staircase made from a century-old maple tree that the couple had been storing at their cottage. Although there wasn’t enough wood for all the stair treads – the top three steps and bottom three are metal – the staircase packs a visual punch.

The former main staircase was enclosed between two walls and went from the front door directly up to the top duplex unit. During the renovation, the staircase wall was removed and replaced with clear glass.

“It’s something people notice right away,” says Mélanie. Seven years on, she says, she is still getting compliments. “When people come inside, they say ‘Wow.’ They see the trees; they see the stairs. All the natural light.

“I don’t know if you can say this…but it’s more breathable.”