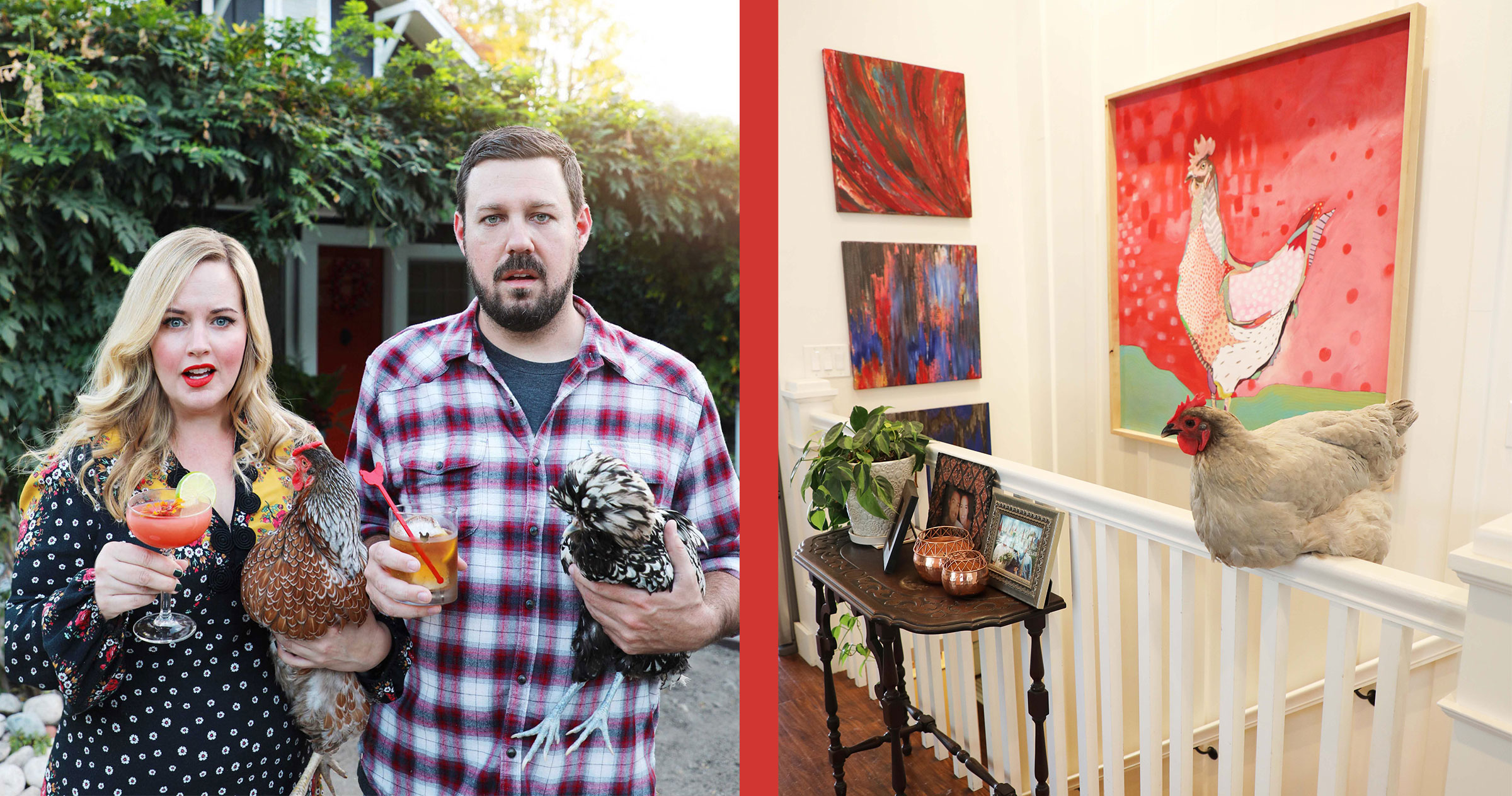 How to improve on the time-honoured ritual of a quiet cocktail at day’s end? Indulge in the company of a flock of friendly fowl, says Kate Richards, a Pasadena, California-based artist and lifestyle blogger. Her special mix of original drink recipes liberally garnished with quirky wit have led to a large social media following and recently released book, Drinking with Chickens: Free-Range Cocktails for the Happiest Hour (Running Press, 2020).

Docile poultry pose on laps and in unexpected places in the cheeky photos she posts on Instagram. For this shoot, a favourite hen perches precariously on a stairwell; others roost on benches. But Kate learned early on not to let her small mixed flock free-range into the 112-year-old farmhouse home she shares with husband Jonathon, four dogs, an equal number of cats and an African Grey parrot.

“If you leave a door open, chickens will walk in and take over,” she says. “So we made them their own special compound.” The pampered birds have the run of a tastefully appointed garden at the back of the 7,500-square-foot lot. At night, they retire to the custom chicken coop, to which Kate added an artful facade of colourful horizontal stripes. It serves a practical function as well, keeping them safe from coyotes and other predators.

When the couple bought the house 12 years ago, it was a foreclosure property in dilapidated condition. But Kate could see potential for the suburban backyard farm of her dreams. Having grown up on one with “every type of domesticated animal except chickens,” she had always longed for a flock to call her own. At the time, she was unaware there might be zoning restrictions. Fortunately, backyard chickens are allowed in the couple’s area.

They tackled the renovation of the 1,250-square-foot home themselves with occasional assistance from a contractor friend. The project was completed in stages over six years, during which time they lived onsite. The top or main floor, which lies at street level due to the lot’s sharp slope in the back, came first.

The home’s interior was gutted to create an open-concept layout. The living and dining areas lie off the front door with the kitchen beyond, as well as a guest powder room and the main bedroom and bath. Two additional bedrooms and a full bathroom are on the lower level that lets onto the back garden.

Once the bones were in place, Kate then turned an eye to the decor. “It’s all me,” she says. “My decorating style has been called modern farmhouse, but I prefer ‘farmhouse quirk’ or maybe ‘adjacent.’” Shiplap, a mainstay of the look, does cover the vaulted ceilings on the main floor and one wall of the main bedroom. But she made the choice before it was a trend and on the advice of her father, a former Navy man and current weekend sailor.

She also likes “things that are brightly coloured and make me laugh.” As a backdrop for them, Kate painted most walls a warm white with the occasional accent wall in an urbane shade of grey. She then adds accessories in her favourite shades of vibrant red-orange or coral. Both the home’s back doors and several items of furniture are painted vermillion, including an antique dresser her grandfather made. The colours also predominate in the paint and patinated-metal mixed-media art she creates. Many of her works hang throughout the house.

As well, she commissioned some large-scale chicken portraits in mixed media on wood from artist and friend Emily Reid. And one wall in the outdoor bar area is adorned with a puckish hot-pink neon chicken sign designed by Kate. Chicken-themed thrift store purchases can also be found. “When you walk in, you know the crazy chicken lady lives here. They’ve invaded my decor,” Kate says.

Much as she loves the kitchen that dominates the main-floor layout, in retrospect, she thinks that less space should have been devoted to it.  Since neither is big on cooking, Kate and Jonathon tend to spend more time outdoors in the lower-level bar area and the garden beyond. Pre-pandemic, they would entertain groups of friends or family on the elevated deck off the kitchen. There, a large dining table seats eight people comfortably, and the spacious sectional piled with pillows has seen many a happy hour.

“That changed during lockdown, of course,” she says. “My husband is a television editor and now works from home for the first time in his career. Our garden and chickens have been sanity savers.” Kate has always found it very soothing to sit and watch the flock “just chickening around.” She thinks that her social media platform took off so quickly because many other chicken owners do, too. They also share her belief that the experience is that much better with a good cocktail in hand.

“My home is about what makes me happy, and chickens have always been part of it,” Kate says. “They provide the organic fertilizer in which I grow the ingredients for my cocktails, and I often use their eggs in drinks. And they are the happy-hour entertainment.” •