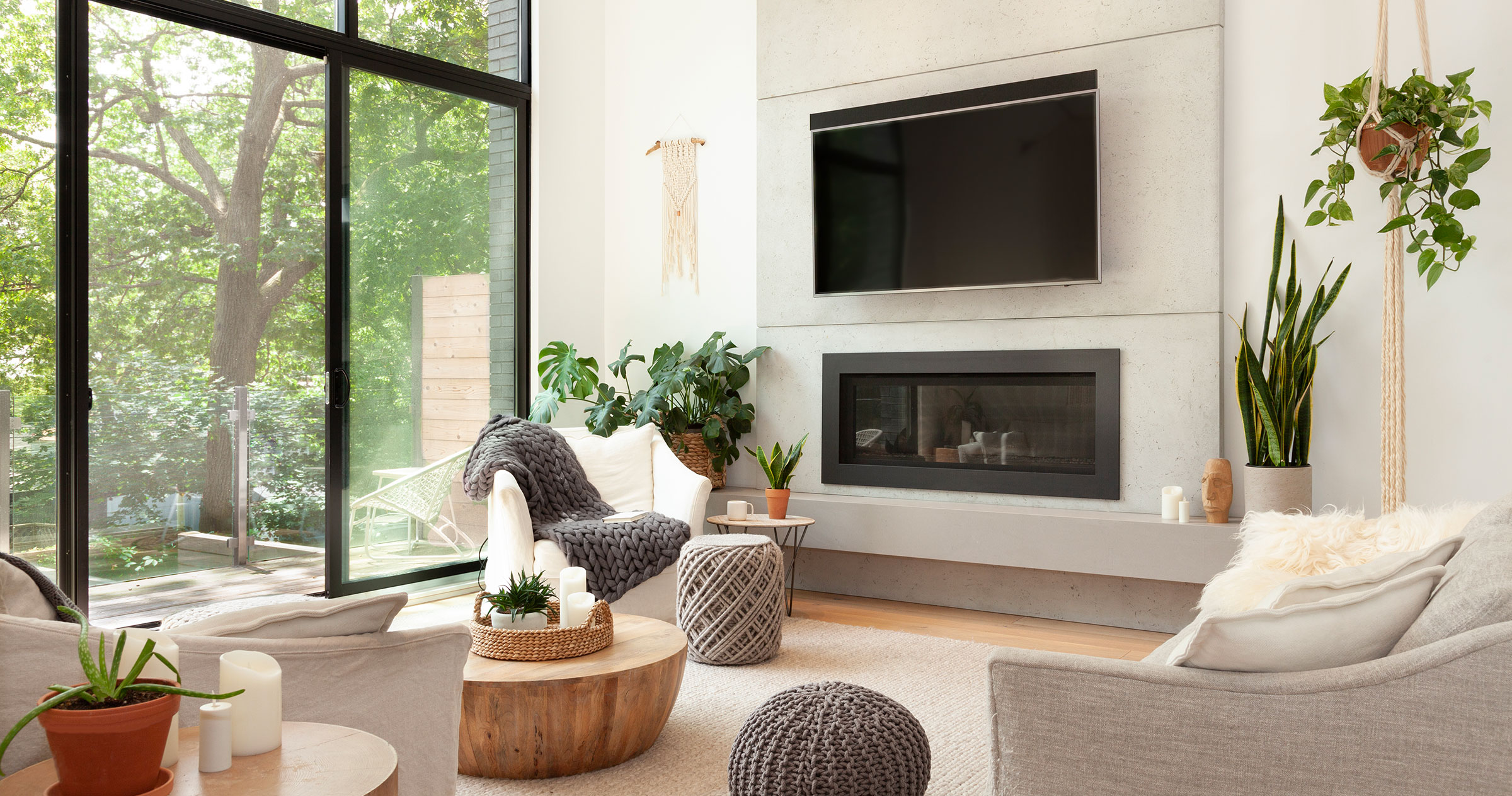 A third floor surrounded by treetops, views of Lake Ontario—designers Azen and Kevin Bongard set out to make their city home in Toronto’s Beaches neighbourhood feel as rooted in nature as possible. A wall of 12-foot-high windows in the family room at the back of the house brings in natural light and opens the interiors to the backyard. “You really feel like you’re living half indoors, half outdoors,” Azen says, “until it gets super cold.”

To achieve that kind of biophilic design—a term used to describe design that optimizes people’s connection to the natural environment—they needed more than just a few large windows, she says. The layout, choice of finishes, and even furniture and accessories all contribute.

The couple, principals at Studio 8 Design, found and bought their home while it was under construction, and so were able to create the inside space exactly as they wanted. Walls built with insulated concrete forms and radiant floor heat throughout make it energy-efficient and eliminate the need for a furnace with bulkheads and ductwork that can limit design. They do have a small boiler to heat the water pipes and individual units to provide air conditioning.

Since it functions as both a family home (their children are 21 and 13) and an office, every inch of the 3,000-square-foot space counts. The basement is dedicated to the couple’s business, and includes a staff washroom and kitchenette. The main level is shared family space: the dining room and kitchen look down over the back family room. The second floor is given to the children, and on the third floor is the main suite, with its own wall-to-wall windows opening to another deck. “You can sleep with the windows wide open and feel like you’re sleeping in a treehouse,” says Kevin, the firm’s project manager. “You’re so high, you feel secure. There’s no place where I’ve lived in the city before where I felt like I had so much visual privacy.”

The home is smaller than their previous house, says Azen, the firm’s lead designer. So she wondered whether it could accommodate the karaoke parties and family pizza-and-movie nights they were used to having. It all works out, she says, and the new space feels bigger than the old. On karaoke nights, they open the back doors and the party spills outside. The TV is on a swivel mount that they turn to face the kitchen island where they gather for pizza. Also crucial was the right allocation for storage space: “We have custom built-ins and closets in every possible area,” Azen says. “Everything is divided and organized and set up for our life.”

Because the outside colours change every season, Azen chose a neutral palette indoors to complement that range of hues. “We didn’t want to be clashing with what’s outside. We wanted nature to be highlighted,” she says. That’s also why they chose retractable window coverings, with the blinds hidden in black valances similar to the black window frames. “Imagine how different it would be if we had drapery everywhere.”

Getting close to nature is not easy in a city, but the house that Azen and Kevin designed allows them to find it right outside. •