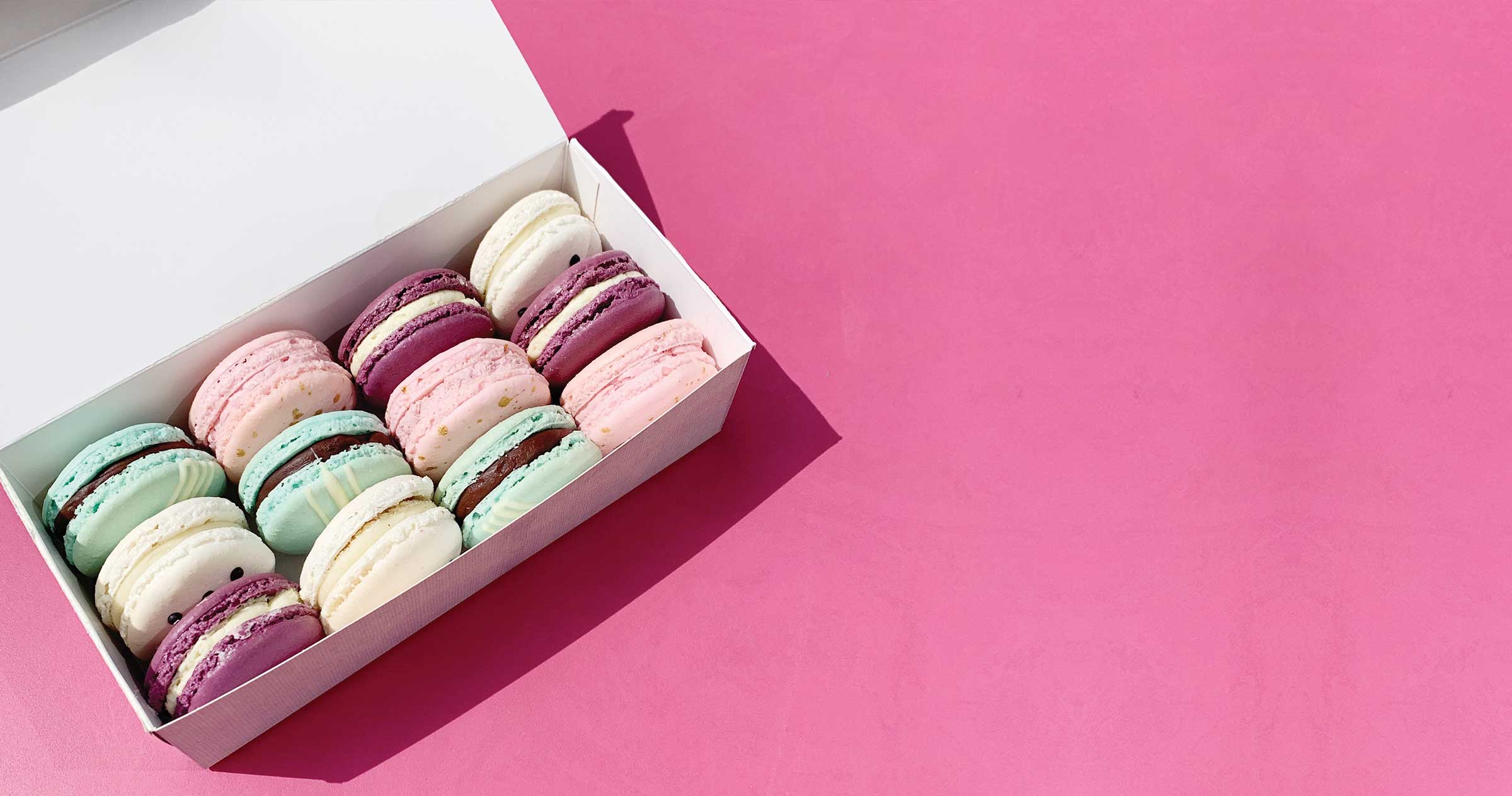 A Spoonful Of Sugar

Canadians are learning to bake everything from macarons to layer cakes

Many of us are fortunate enough to remember when our mothers or grandmas lovingly baked our favourite cakes or cookies. My favourite cookies are still almond with lemon icing. Yet I’ll admit that when it came to my birthday, I yearned for a fancy cake that a professional baker had evenly frosted and decorated elaborately.

I know I’m not alone in longing for that baked sophistication. Perhaps stirred by the TV shows about baking that promise that “yes, we can,” or wanting to win the approval of our children, more of us are signing up for classes across the country to learn the baking and decorating skills and secrets of the professionals.

Lindsay Rousseau’s instant “love affair” with macarons led her and her husband David to start Ollia Macarons & Tea in Calgary five years ago.

“Our wedding, organized by David’s family in France, was the first time I laid eyes on macarons and I thought, ‘I’m totally going to eat that,’” Rousseau recalls. “One bite of the tomato and soft chevre and I was hooked – looking for macarons everywhere I went afterwards.”

Shortly after the couple’s return to Lindsay’s native Canada, David worked at a French-run macaron shop in Victoria. Almost two years later, the Rousseaus launched Ollia. “We’d already scheduled the opening but it took another three weeks for David to adjust the recipe for 1,042 metres above sea level,” Rousseau recalls. “Macarons are called the grey-hair makers for good reason.”

They are finnicky. “If you overmix by two strokes, or the oven is a little too warm for the third of four rows, they won’t come out as desired,” Rousseau explains. “That’s why it’s a good idea to learn techniques from people who’ve baked more than a million.”

Every week, between one and four dozen people learn how to make the Goldilocks of French pastries at Ollia. Still others sign up for Edmonton classes. It’s an exercise in patience, taking two-and-a-half hours to prepare a single batch.

The nine steps the Ollia instructors relate include making Italian meringue. “It’s the most forgiving if you’ve added a bit much of something or stirred too little or too long,” Rousseau says. “The batter then has to be put into the pastry bag fast so its temperature won’t drop.”

Figuring out how long to rest the piped batter requires being a bit of a meteorologist. “They have to form a slight crust so they don’t rise too quickly in the oven and crack,” Rousseau explains.

Students also learn how to create a good chocolate ganache and fruit ratio, as well as a cream cheese filling.

At the High Tea Bakery in Winnipeg, the cookie decorating classes sell out within 24 hours.

“We teach the same techniques in every basic class, but people return for Mum’s seasonal ideas,” says Belinda Bigold, who co-founded the bakery with her mother, Carol.

Here’s where cookies brandish a vibrancy of colours and curlicues. “When you bring a little art into your baking, it makes occasions that much more special,” Bigold says.

The number-one lesson is patience: waiting until the cookies fully cool before decorating them, and waiting again for the basecoat to dry, so the icing colours don’t bleed into each other. “We make the most of our time by having six of every dozen of the cookies prepared with the basecoat,” Bigold adds. “But people come to appreciate why a cookie or petit four costs as much as it does.”

Students learn how to hold the pastry bag so the icing doesn’t ooze out of the top. They also learn about the many decorations achievable with just a bag, a coupler, two different-sized tips, and imagination.

For those seeking a professional calibre, there are institutes such as the Pastry Training Centre of Vancouver, founded by award-winning master pastry chef Marco Röpke a decade ago. “We’ve really seen homemakers wanting to up their skills,” he says.

The cake-decorating program consists of eight compulsory courses held over four hours twice weekly. “Students begin by making a cake from scratch, then German buttercream that you cook as a beautiful custard before adding butter to it, followed by a proper royal icing with sugar, egg whites and lemon juice, and so forth,” Röpke says. “We also make our fondant and spend a lot of time showing how to roll it out. And then there’s chocolate work, gum paste techniques, and learning to pull and blow sugar.”

One of the components of the 10-week pastry program is learning how to make delectable bites for afternoon tea. Everything is done with a wooden spoon to draw sugar through a soft butter to create the required air tunnels. Eggs are incorporated at room temperature so they emulsify into that butter prior to the flour and baking soda or powder being slowly added.

Every station has a copper bowl. “Copper boosts a meringue’s stability and triples volume,” Röpke explains, imparting one of many trade secrets.

Then again, if you’re simply looking for a more whimsical experience, check out the Lincoln Apartment Bakery classes run by Jessica McGovern in Montreal. “We don’t do ‘perfect’ here,” says the TV host of Flour Power. “We do fun and delicious.”

McGovern teaches the rustic baking she began doing with her grandmother and mother when she was a little girl at home in Ireland. “I want to show that baking doesn’t have to take all day or dirty every bowl.”

She launched her business as a sideline eight years ago because friends kept asking her to show them how to make the zowie cakes, cookies and cupcakes that she prepared fast.

“I do explain how each technique is done so people can work on it at home if they want,” she says, “but the main point in our two-hour classes is to have fun, express our individual styles and, above all, make something yummy.”

McGovern says that the current decorating obsession has resulted in some poor-tasting desserts. “We show how to make a moist cake, prepare a buttercream that’s not overly rich, and achieve a nice flavour balance with something like a lemon-curd filling.”

Some of the classes, often booked for bachelorette and birthday parties, focus on making the smoothest of red velvet cakes (hint: vinegar and buttermilk) or scrumptious pies. “So many crusts are dense or dry, so I want to share my grandmother’s recipe,” McGovern says.

The Ice A Cake Institute in Scarborough, Ontario also emphasizes that anyone can learn to decorate a dessert. Founder Lika Zowmi showcases her students’ creations on Facebook and Instagram. “Some are reserved at first but we encourage everyone to try,” she says. “The amazing cakes our students create show that you don’t have to be an artist or perfectionist to be a decorator.”

For those so inclined, the courses build toward certification.  Basic classes involve everything from frosting to creating flowers, borders, writing and printing, as well as how to fill cakes and cupcakes to resemble a bakery’s products. At the advanced levels, students learn everything from how to use fondant properly to creating breathtaking gumpaste and royal icing flowers as well as other decorations involving wafer paper, isomalt, chocolate, and rice or bean paste.

For some of us though, it’s that deceptively simple-looking macaron that we long to master. At Le French Fix in Halifax, award-winning pastry chef Geoffroy Chevallier has been giving his students a taste of Paris for the past seven years. That includes welcoming four people at a time into his small pastry space to learn his macaron techniques.

“Everyone has a chance to see and feel the batter’s texture, and how I use inexpensive equipment to make things easier,” Chevallier says.

Ninety minutes later, armed with the basics, the four are ready to pursue the quintessential macaron’s infinite flavour possibilities. •

Get Your House Ready For Winter

There’s nothing more peaceful than relaxing at home – warm and comfortable –while gazing out the window at the snow...

The holiday season brings plenty of joy. However, it is important to recognize the mental and psychological stresses that many...

Greece is a summer travel destination that lives up to its postcard-perfect reputation. Picture this: crumbling white ruins, blue churches,...

Laura Nezri didn’t know exactly what kind of business she wanted to start, but she did know she wanted it...