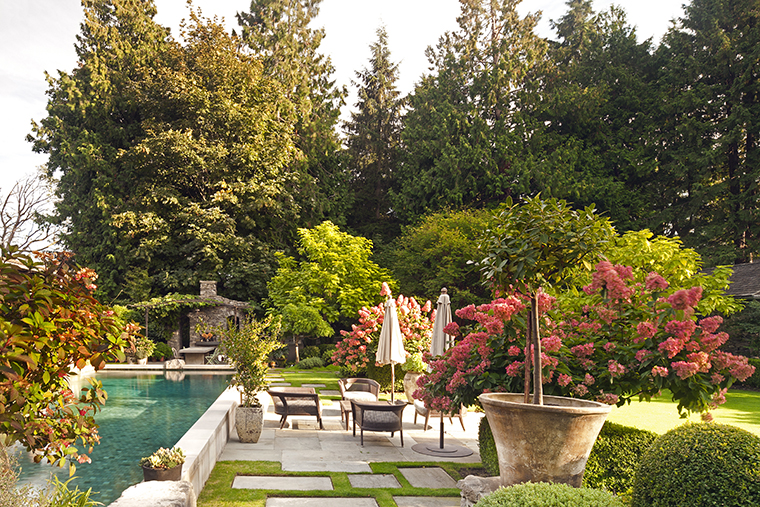 ROOTED IN THE LANDSCAPE

A Southlands garden is designed to look timeless 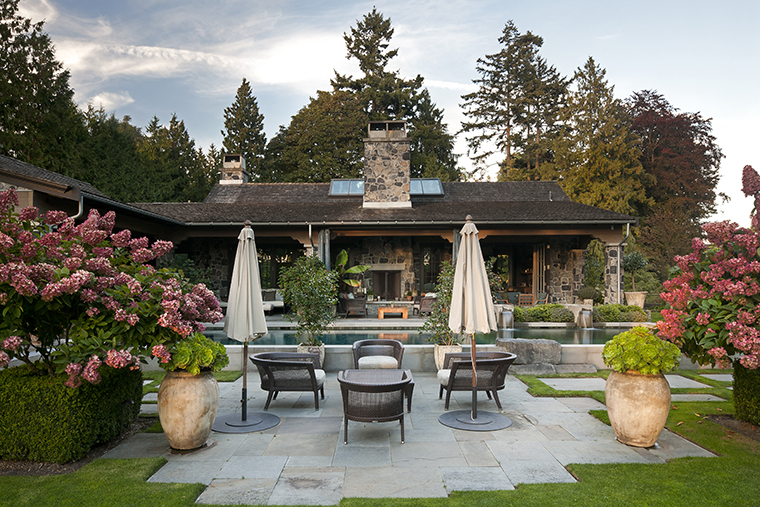 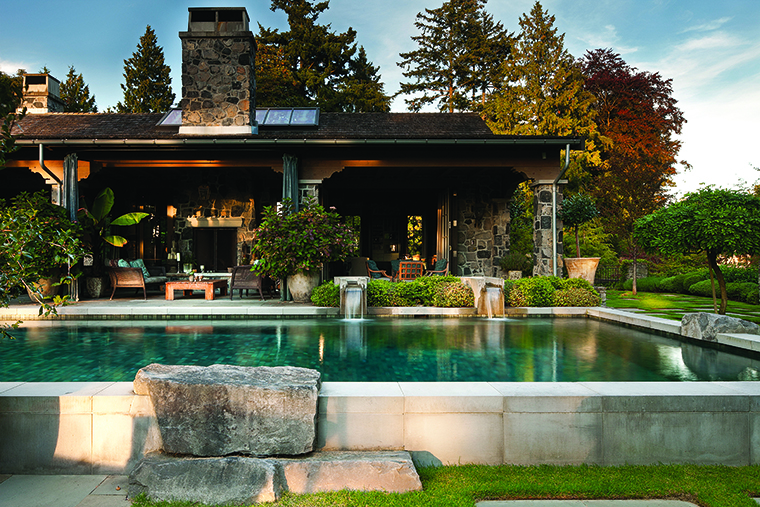 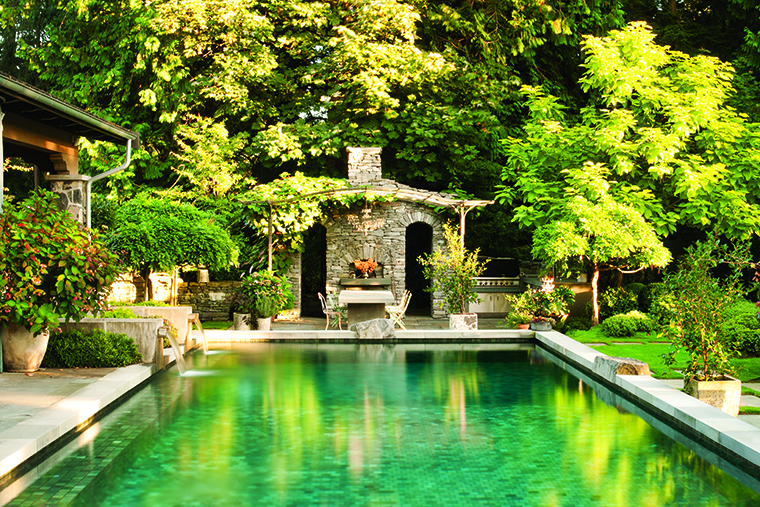 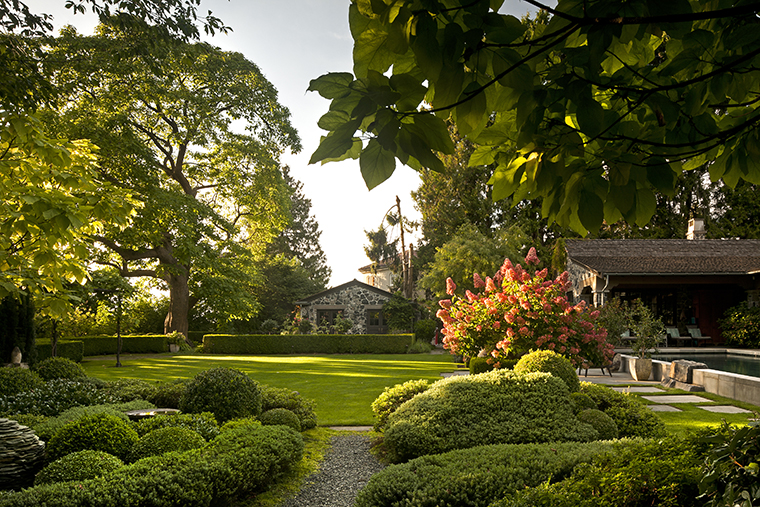 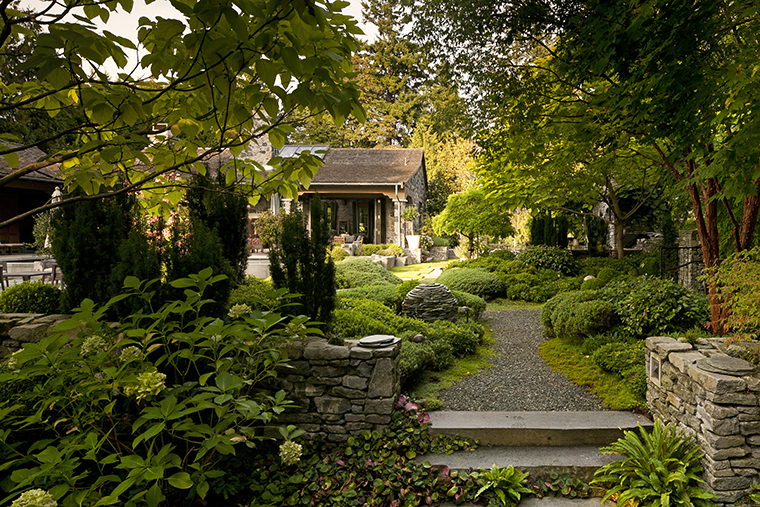 Everything about this property suggests that the home and garden have occupied their place in the landscape for a long time. And yet … “This is a new house, a guesthouse,” says Mario Arteaga, a landscape architect with Paul Sangha Landscape Architecture in Vancouver.

“There is an existing home next door to the property, for which we designed a garden,” explains Arteaga, adding that when his clients bought this adjacent piece of land, they asked the Paul Sangha team to return and design it. A small stream bisects the two properties; a little bridge that traverses the water unites them.

“It was so nice going back to work with the same clients,” Arteaga says. “They were really open to ideas. They wanted a timeless garden.”

And that’s what they got. Both the guesthouse and garden were designed to create a look of Old World permanence.

The L-shaped guesthouse, built in 2008, serves two purposes. In addition to accommodating visitors, it contains a pool house. Another outbuilding on the property contains an artist’s studio where one of the homeowners paints.

“We worked with the house’s architects to integrate the two architectures,” says Arteaga. “We wanted to create a relationship between the house and the garden. Because this is a large property (about an acre) near the Southlands, there is a lot of variety in the garden. Some areas are formal and some are rustic.”

The property serves as the homeowners’ summer recreation area, with its tennis court, swimming pool and various spots for dining and lounging. A pizza oven at one end of the pool is a popular area for outdoor cooking.

There weren’t many mature trees on the land when the project began, says Arteaga, except for a few in the ravine on the property. So the team planted vine maples (Acer circinatum) paperbark maples (Acer griseum), catalpas (Catalpa bignonioides ‘Aurea’ and Catalpa speciosa) and magnolias. “This garden isn’t about colour; it’s more about texture,” he says.

The overall design of the garden is formal. “The planting style flows from textural plants to Tuscan-inspired topiary vegetation, such as lavender and olive trees,” he says. A few blooming trees and shrubs confer blossom colour. They include Magnolia grandiflora, which was planted around the outside perimeter of the tennis court, and sensual hydrangea paniculata ‘Pink Diamond,’ the blossoms of which transform from white to a delicate vieux rose as the summer progresses. Boxwood (Buxus) was planted to contain and define beds and borders.

The swimming pool is tiled with natural slate, which gives the water a green tone.

The homeowners use the space often during the summer. “They have all their summer activities out there: tennis, the pool, the pizza oven,” Arteaga says. And despite the fact that the garden seems to have been in place a long time, he adds, “it will keep developing, evolving and growing.” •

Photography: Brenda LiuStyling: Kennedy McRae The design of a new garden terrace in a downtown Toronto condominium was influenced by...

A MASTER OF MAGICAL MOSAICS