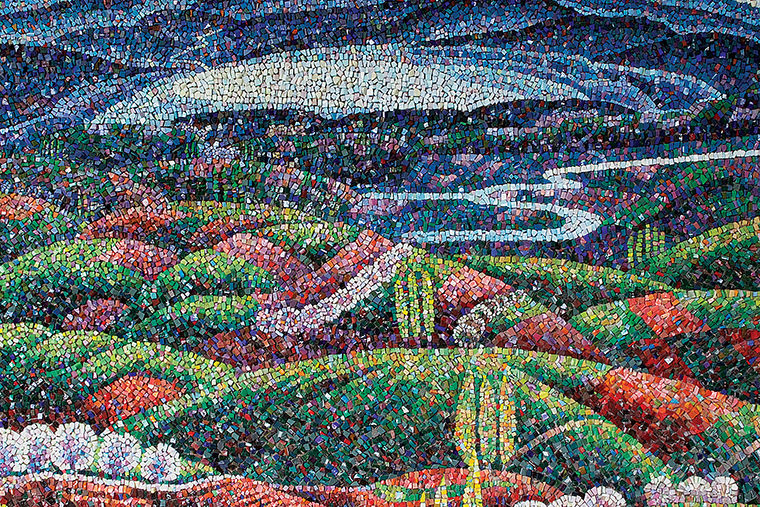 A MASTER OF MAGICAL MOSAICS 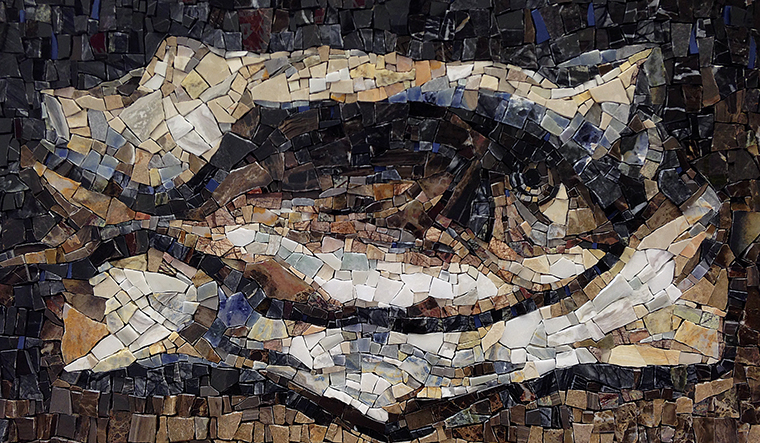 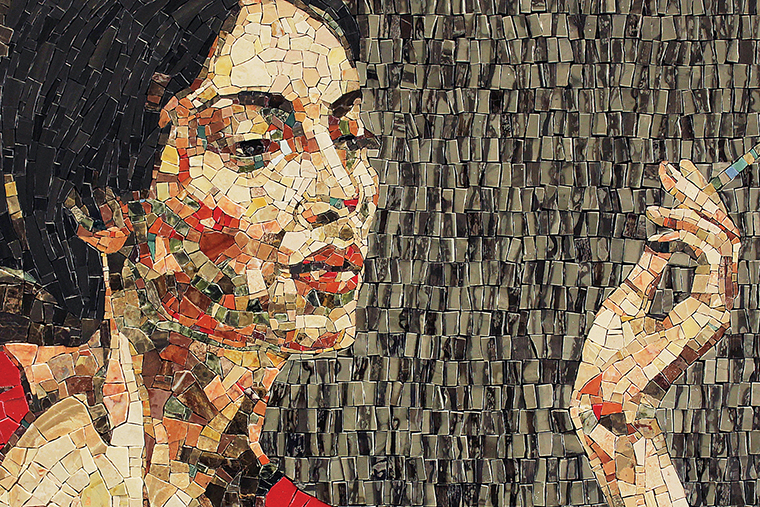 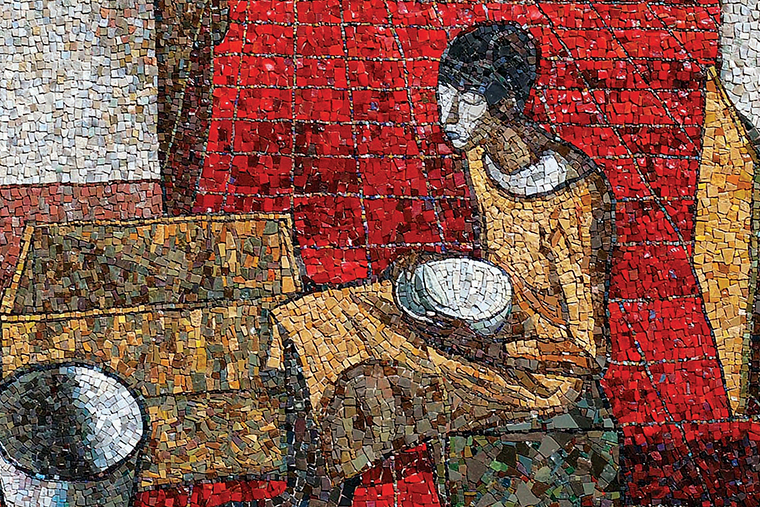 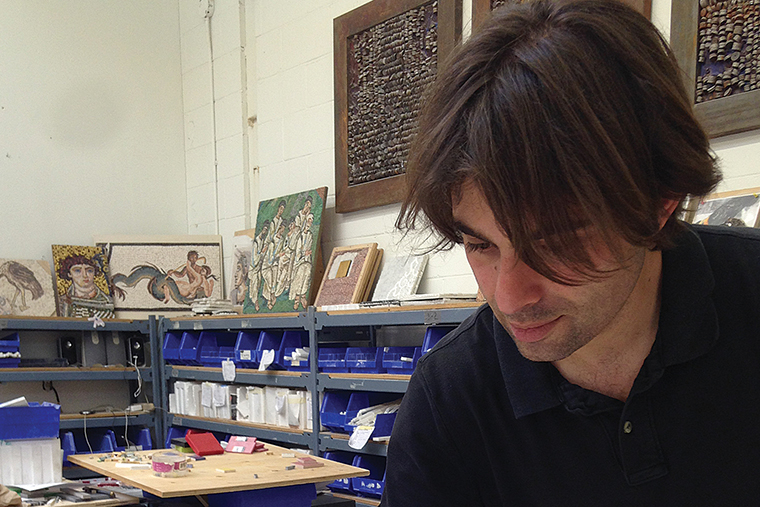 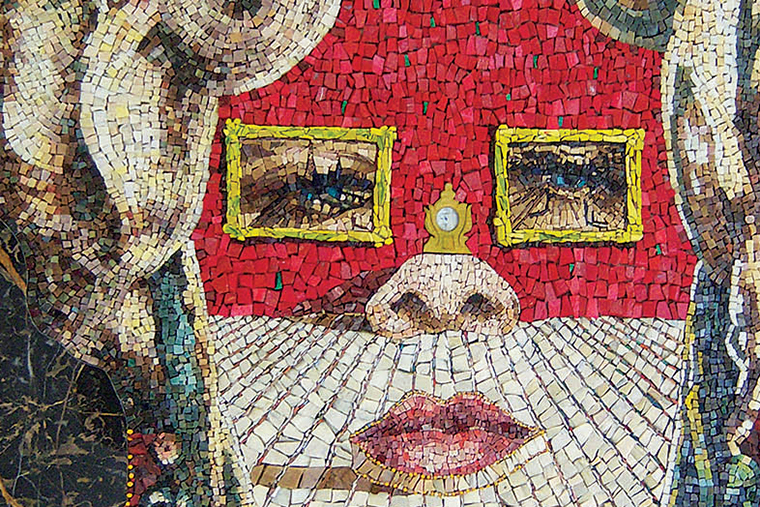 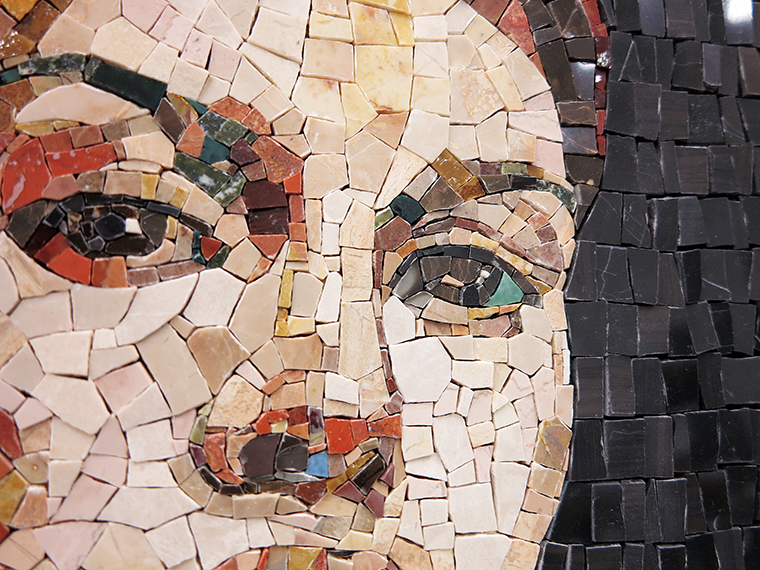 At his studio within Ciot’s Montreal premises, Igor Marziali deftly handles a martellina to chip at a slab of marble. The simple hammer and hardie resemble the chiselling tools used by artisans during the Roman Empire.
“I look for the curvature and colour that I want to extract from the marble for each tile and put the martellina to work there in the same way a musician places a finger to extract an exact note,” says Ciot’s resident maître mosaïste, as the French would say: a master of mosaics.
The lanky artist exudes passion as he brushes aside his long brown hair and talks about his craft of deconstructing stone, marble and glass and reshaping it into art. “No two designs are the same because of the uniqueness of every piece,” he says.
Marziali grew up surrounded by art and music. His father restored paintings and his mother taught art. He started piano lessons at age six, switched to violin at nine and played first violin within the Castiglione del Lago Orchestra as well as in a rock band. His three brothers are all artists. “There was always a painting or sculpture in progress within our home,” he recalls.
He initially studied painting, but found it lacking. “I wanted to explore other forms of art,” he says. “When I experienced working with my hands to create a mosaic, I knew I had found my calling. Creating a mosaic is like painting with stones.”
While his artistic design professor insisted he would have greater success as a musician or painter, Marziali couldn’t be swayed. “It was hard to leave family and friends, but I travelled 500 kilometres to attend La Scuola Mosiacisti del Fruili, Italy’s mosaic academy,” he says.
Marziali learned how the Ancient Romans cut tiny squares of marble, tile, shells, pottery and glass to fit as closely together as possible on a base of fresh mortar. He studied Byzantine design and techniques that further advanced the art through the use of brighter tiles and glass to adorn domes and archways in and around Constantinople as Western Europe descended into the Dark Ages.
After three years as a student, Marziali taught contemporary mosaic techniques and Venetian terrazzo at the academy from 1996 to 2012. He was ready for a new challenge when Ciot approached him to become the company’s maître mosaïste.
He is in charge of customized and non-customized mosaic design at Ciot, enjoying the wide variety of projects. Some of his work can be viewed at www.ciot.com/usa/en/habitat/artisticmosaic/artworks/3-d/index.sn but that experience pales in comparison to admiring them in person.
True to his goals, Marziali is arranging to showcase not only his work but mosaics by his Italian peers at both the Ciot studio showrooms and as part of the Pompeii exhibition at the Montreal Museum of Fine Arts towards the end of next March into late June, 2016.