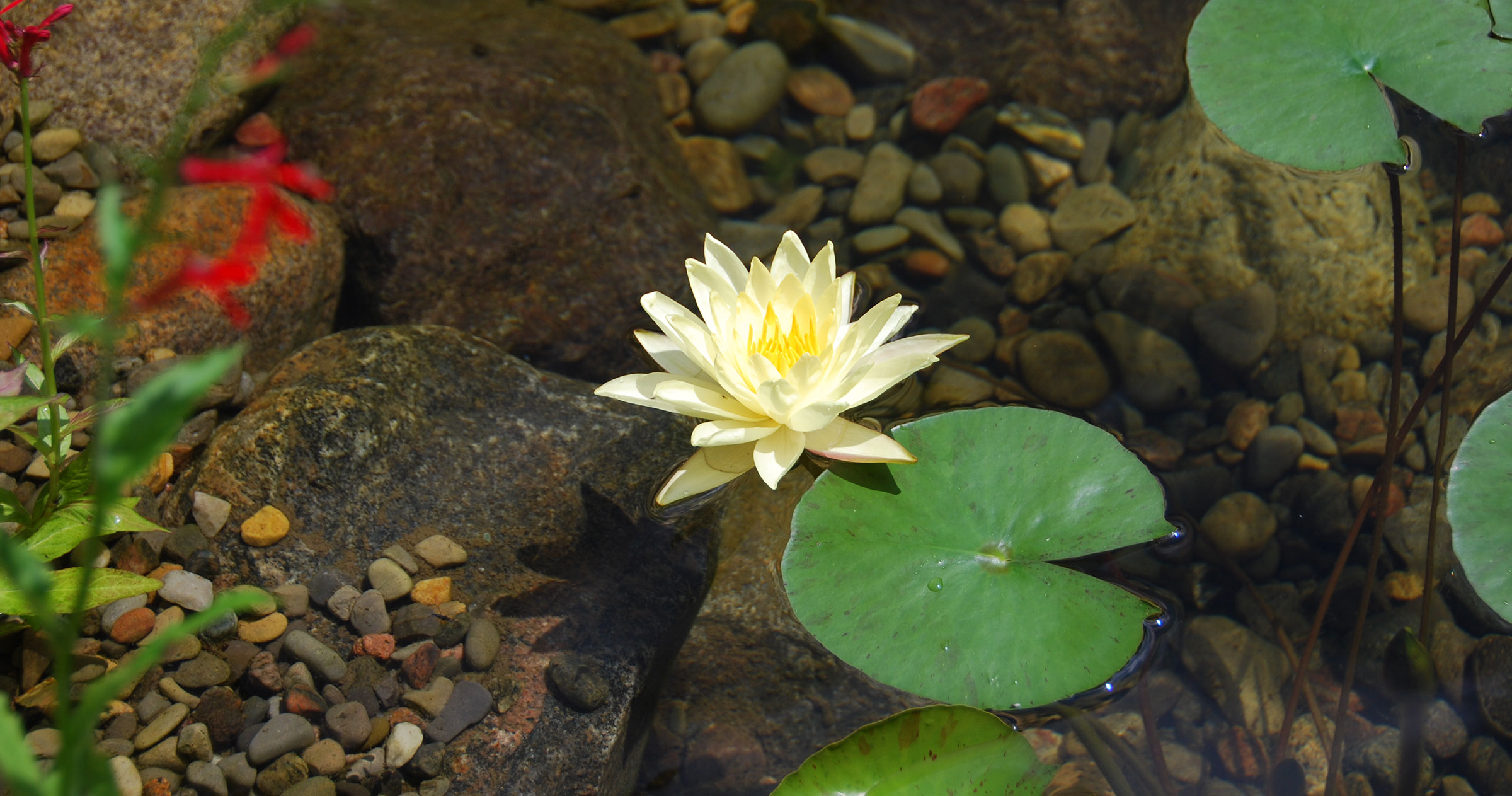 Ask anyone to name their favourite place to bliss out and there’s a good chance it will be beside a body of water—an ocean, lake or river. Water has that kind of magical hold over us. That fact fuels Montreal landscape designer Jean Brûlé’s passion for water gardens.

Water is the defining feature of Brûlé’s garden-design projects. He has designed hundreds of water gardens since leaving behind ordinary landscape design in 1998 to found Jardins Aquadesign, in the Laurentian town of Val Morin.

“But that’s only half of it,” he adds. “Water is life. If there’s no water, there’s no life. We have to bring back nature to the backyard and there’s no better way to do that than with water.”

Among his favourite creations: a Japanese-inspired pond and stream in a suburban yard in Montreal’s West Island suburb of Beaconsfield; a large swimming pond (30 by 50 feet) on an expansive country property outside the Laurentian town of Morin Heights; and a beautiful pond and waterfall surrounded by flowering perennials and native plants, set within a landscaped forest setting, in a garden in the Laurentian town of Ste-Adele.

Brûlé says that since he has moved into water-garden design, people have increasingly come to appreciate the benefits of aquatic landscaping. In the early days, he says, he had to give talks to horticulture clubs to promote water gardens and explain how they nurture beneficial insects (dragon flies) and provide drinking water to birds and other wildlife. (Mosquitoes are not a problem because they prefer still water to the moving variety.)

In more recent years, he says, the environmental movement has helped raise awareness of the importance of water in the landscape, helping to boost his business further. “Our goal is to recreate an aquatic ecosystem, like that of Mother Nature, right in your backyard.”

Brûlé says there’s a water garden that’s right for every property, even downtown apartments and condos. He cites patio ponds, which are fibreglass or concrete containers measuring three-by-three feet or four-by-four feet, and outfitted with a pump to circulate water in a closed system. They make a gurgling sound and can transform a balcony into a mini water oasis, particularly if Japanese bamboo, water lilies and tropical plants are added.

However, the bulk of Jardins Aquadesign’s work involves larger installations. They range from a classic turnkey water garden and pond measuring six-by-eight feet and costing from $6,000 to $7,000, to sophisticated aquatic ecosystems with large ponds, multiple waterfalls, streams and rockery that cost tens of thousands of dollars.

Once installed, the ponds couldn’t look more real. An artificial pond can be made to imitate a natural one, with the deepest point in its centre and step-like contour levels radiating out to the perimeter, at which point the pond’s banks begin to rise in steps, usually about eight inches at a time, to further replicate Mother Nature’s own design.

Pond water is kept at between 18 and 21 degrees Celsius so as not to kill aquatic plants—both visible and microscopic—and to prevent algae build-up.

Finishing the design, the pond banks are fortified with boulders and planted with marginal plants—the name for species that do well in moist conditions. Marginal plants include Lobelia cardinalis, Iris versicolor, Pontederia cordata, Sagittaria latifoliaandCaltha palustris.

Many people choose to add koi and goldfish to their ponds, Brûlé says, noting that they feed wholly on the microscopic life in the pond. However, the fish can overwinter only if the pond’s depth is two feet or more. Otherwise, they must winter in an indoor aquarium. Herons, which feed on the fish, can be problems. A heron statue can help deter those hungry birds.

Submersible LED lighting is also an option, and something that Brûlé recommends to clients. “It gives you two different water gardens,” he says, citing the night-and-day difference.

Finally, there’s maintenance and municipal regulations. Many municipalities require fencing around a backyard pond as they do for swimming pools. Brûlé adds that maintenance is less complicated than that for a swimming pool or spa. With ponds, there’s no need to balance chemicals and the water’s pH. The average pond simply needs a cleaning at the beginning and end of each season, something that can be done by a contractor. And with the automatic dosing system, the pond will always receive the right amounts of beneficial bacteria and enzymes to keep the water healthy and crystal clear.

“You can go away,” he says, “and not worry about your pond turning green.”

After all, Mother Nature is in control. •