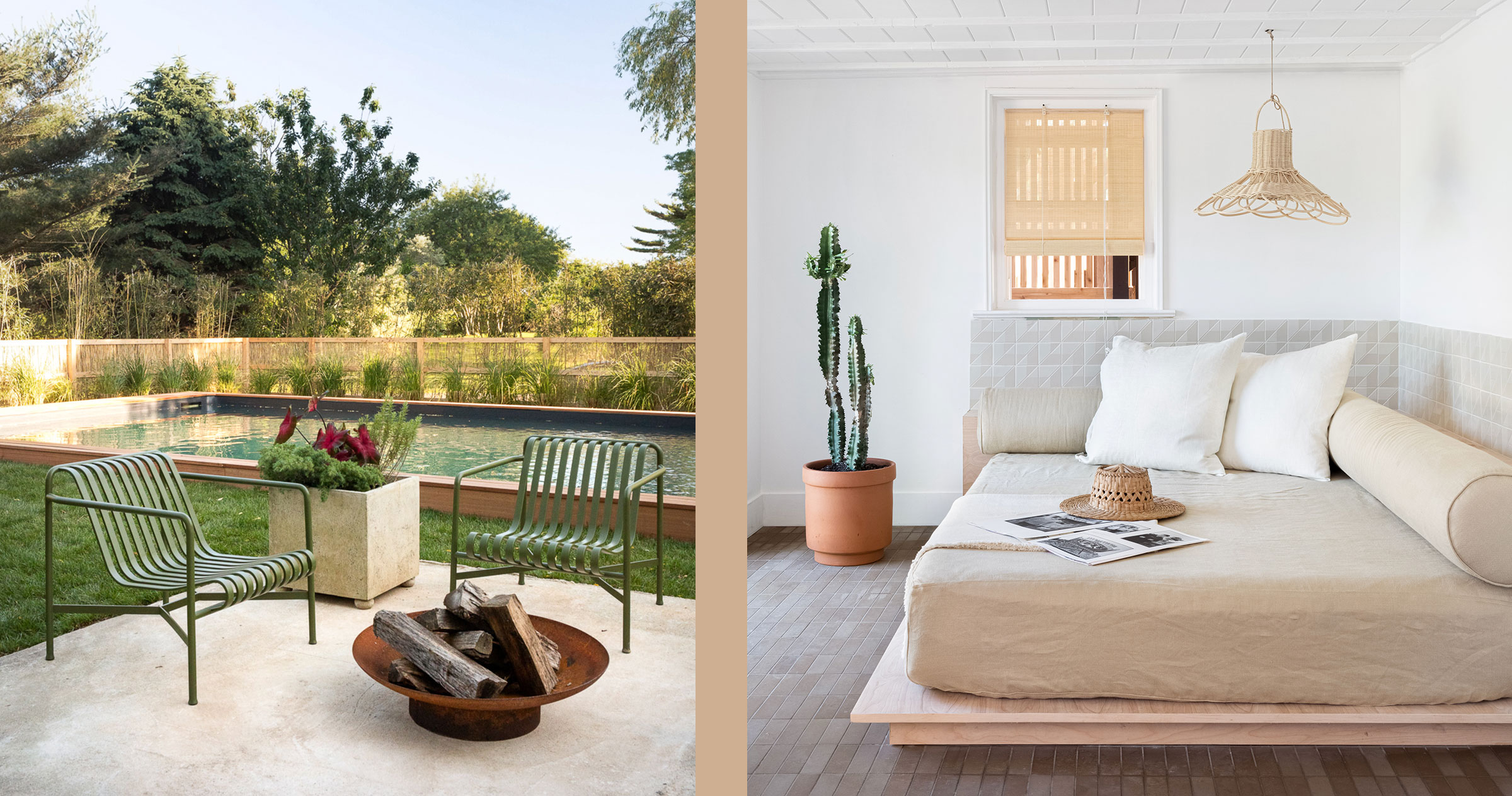 The 1970s ranch-style home had a modest beginning as a summer getaway. However, after a major renovation, the four-bedroom bungalow in the Long Island community of Montauk is now a luxury rental—and a showcase for contemporary design. The McKinley Bungalow Federal, as the property is called, is the second Montauk house to be transformed by New York city designer Robert McKinley of Studio Robert McKinley.

The reinvention of the 2,400-square-foot home was completed for the 2019 summer rental season, following on the heels of the renovation of McKinley’s first bungalow, which he named the McKinley Bungalow Fairview. Each is an eclectic showcase of contemporary design, vintage pieces and found objects, modern art, and a blend of seaside aesthetics from both sides of the Atlantic Ocean.

“We drew inspiration from Montauk’s coastline, the seaside towns of France, the Mediterranean, and the way we live and travel,” says McKinley, who is now working on his third bungalow, slated for completion in summer 2020.

In years past, Montauk was a secluded summer enclave at the easternmost tip of Long Island that attracted some of the 20th century’s most celebrated modern artists, including Andy Warhol, Peter Beard and Julian Schnabel. McKinley says it is this slice of Montauk’s past, its history as an art community, that he is trying to embody in the bungalow series.

When he bought the property that he turned into the McKinley Bungalow Federal (the word Federal was taken from the name of the street on which it is located), it was in rough shape. The house had been neglected for many years and had undergone a number of half-hearted renovations through the 1970s, 1980s and 1990s. Although it was a good size, it had low ceilings and poky rooms. The natural light inside the house wasn’t what it should have been for a Long Island resort town.

Opening up the house’s interiors was paramount. For starters, says McKinley, the ceilings were raised and the home’s original wood beams were exposed to open up the main living area. Some of the walls were removed to create an open-concept space around the free-standing fireplace and raised bluestone hearth. The renovation also created new sight lines between the kitchen, breakfast nook, dining and living areas, and, of course, the doors that access the outdoor deck.

The entire space was lime-washed white to amplify the natural light. New floors of natural white oak were also installed. With a neutral palette as an unobtrusive backdrop, the property’s sophisticated beach house aesthetic could now be brought to life with furnishings and complementary works by artists and artisans.

Among some of the unusual pieces: A funky rocking chair made of blue rebar, with red and black plastic weaving that was assembled by prison inmates in Colombia and sold through Marni Fashion House of Milan, Italy; an ash wood dining table from HAY; vintage fibreglass Kangaroo chairs from the 1960s; reed and leather rugs made by Tuareg nomads; and flat-weave textile tapestries designed by McKinley himself in collaboration with AELFIE.

Even though many of the pieces were purchased from design houses, there is nothing fussy about the decor in the main living space. The organic and seaside style has been enhanced through the addition of shells and rocks, a shark jaw, and tropical plants in terracotta pots.

The home’s four bedrooms were also lime-washed white and furnished to blend with the almost Bohemian aesthetic of the communal space. They are outfitted with simple-looking furnishings, including Floyd platform beds, which feature ingeniously designed lift-up-and-fold plywood frames, held together with straps. More modern art, found objects, and works by artisans decorate the bedrooms.

A second sitting room a few steps down from the main floor is the only room in the house with colourful walls. Painted palm-green, the room was lime-washed, giving the walls an architectural texture. “It feels like a jungle room,” says McKinley. It’s decorated with a mix of contemporary furnishings, rattan, exotic woods, tropical plants and North African light fixtures.

The final step in the renovation was an update of the backyard deck and pool-house room. Neither of the McKinley bungalows is directly on the beach, so the designer wanted the outdoor recreational area of the house to look modern and beachy.

To achieve the look, he installed a spa-like architectural screen, made of wood fashioned in vertical slats, onto the exterior of the pool house. The screen extends from the backyard’s weathered mahogany deck upward 20 feet to where it becomes an enclosure for a smaller upper deck. The screening extends the comforts of the home’s interior to the outdoor area, and the same pattern is repeated in fencing surrounding part of the yard.