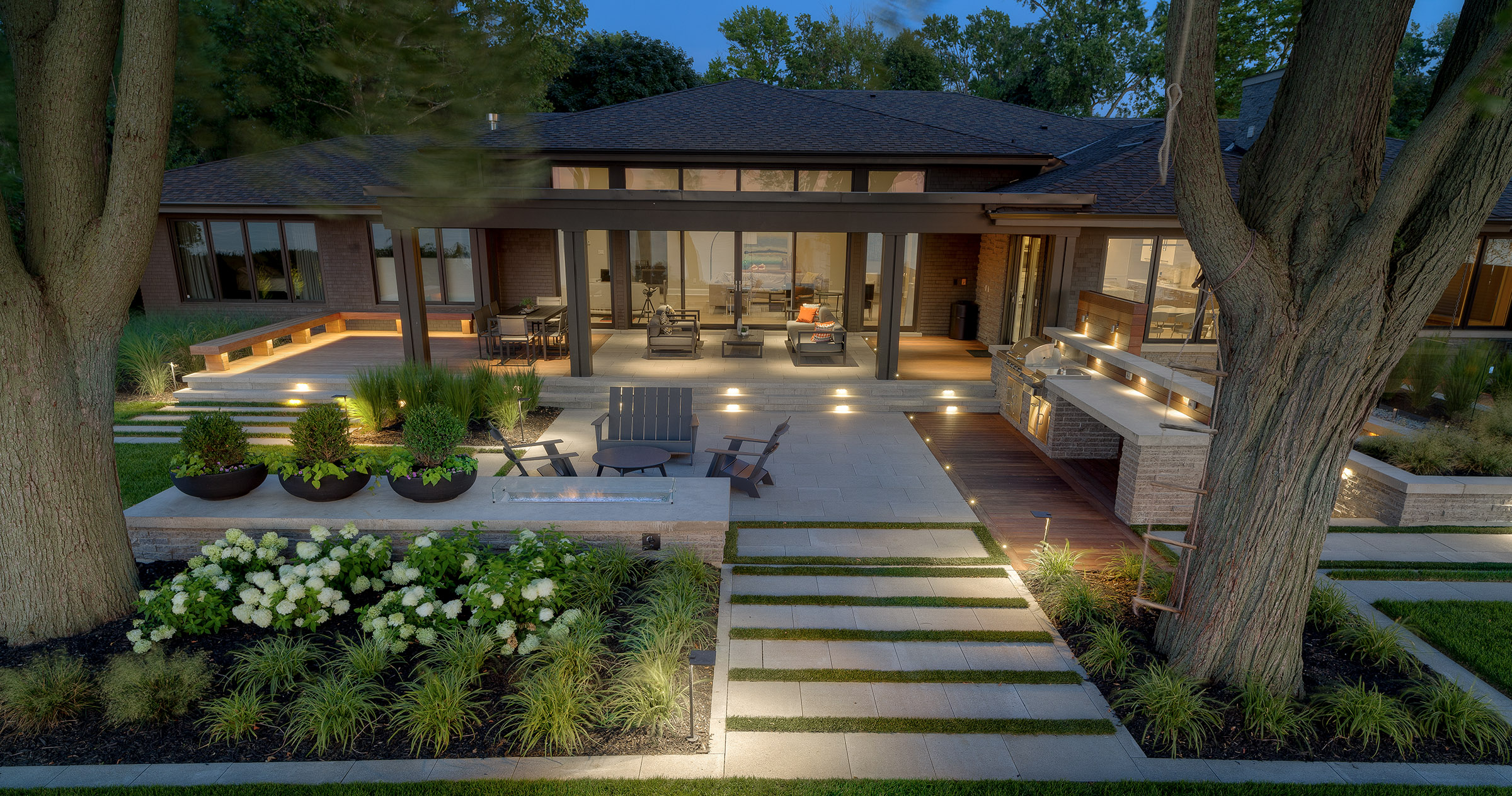 Creating The WOW Effect In A Low-key Garden Design

A lakeside St. Catharines bungalow is given a streamlined, elegant landscape

The understated and classically contemporary exterior of this newly built bungalow shows a certain Frank Lloyd Wright influence. Like those designed by that pioneer of organic architecture, the home appears to be at one with its lakefront surroundings in the Port Dalhousie community in St. Catharines, Ontario.

“Our main challenge was to enhance the home’s best qualities and modern style through the landscaping and, of course, make the most of the lake views the area is known for,” says Doug Glancy, landscape designer and owner of Kiva Architectural Design in Fonthill, whose company was responsible for the transformation.

When it came to choosing materials, the designer believed the home’s aesthetic called for a minimal approach. For a touch of urban sophistication, he liberally used polished concrete aggregate slabs to complement the home’s facade. They cover not only terraces but raised planters and outdoor kitchen areas. As well, large slabs inset into the ground form walkways near the rear deck and side pool area. Outlined with artificial turf — to ensure the “grass” stays green and requires no maintenance — they become features that lead the eye as well as the feet.

To punctuate this understated scheme, Glancy strategically placed large metal panels to form bold and striking privacy screens. One shields the side pool zone, the other the firepit area at the rear. As well, they add an architectural, almost sculptural, element and are made of Corten, often called “weathering” steel. “It develops a rusted highly textured surface over time, yet remains strong and stable,” says the designer. “And its warm orange-brown colour harmonizes with the ipe wood used on the decks and shade features.”

For consistency, minimalism extends to the plant palette. Glancy relied heavily on the subtle shades of greens and varied textures found in ornamental grasses. Switch grass (Panicum virgatum ‘Heavy Metal’), maiden grass (Miscanthus ‘Gracillimus’) and tufted hairgrass (Deschampsia cespitosa ‘Goldtau’) feature strongly in raised beds and those at ground level. For a contemporary look, only two types of grass were planted in each, separately in blocks rather than mixed or in alternating rows. Colour was added judiciously in touches of blue salvia, geraniums, and white hydrangeas.

The homeowners, a couple with three school-aged children, were keen to preserve two large mature maple trees. Standing at the back of the home, they shade a seating area with a raised flower box that also contains a modern linear fire feature. As well, a row of four ornamental pear trees were added to the front, and flowering dogwood by the separate pool area.

The back area facing Lake Ontario was designed to provide several areas from which the homeowners and their guests might enjoy the backyard and revel in the fine view. A wide covered terrace contains spacious and separate dining and lounge areas. Two steps lead down to the lower seating area and the lake beyond. One of the home’s two outdoor kitchens is set off to the side. It is seamlessly set in a long divider with a double concrete counter. A top-of-the-line barbecue and hidden storage make it as functional as it is stylish.

The kitchen also serves to visually define the entertaining area while concealing a basement walkout beyond. The latter proved problematic for the owners, who couldn’t see how it could have not only function but a distinctive style, Glancy says. His solution was to add planters with stone surrounds, offset the stairs and place ipe wood accent panels to the walls. Inset LED lighting creates ambience at night and ensures safety.

The couple had originally planned to put the pool on the lake side of the home. But after living there for a year, they realized the occasional high winds off Lake Ontario might pose a problem. “I generally recommend that people live in their home for at least that long before taking on an extensive landscaping project,” Glancy says. “I think it takes a while to know how you really will use the space.” The family now enjoys the 18-by-38-foot rectangular pool on the more-sheltered south side of the property, between the detached garage and the house.  The home’s second outdoor kitchen is located there, as is a second dining area.

“In the end, I think we were able to provide a variety of living spaces and complement the home’s best features without making the landscaping obvious or intrusive,” says Glancy. “The overall design is elegant and low key, like the house.” •