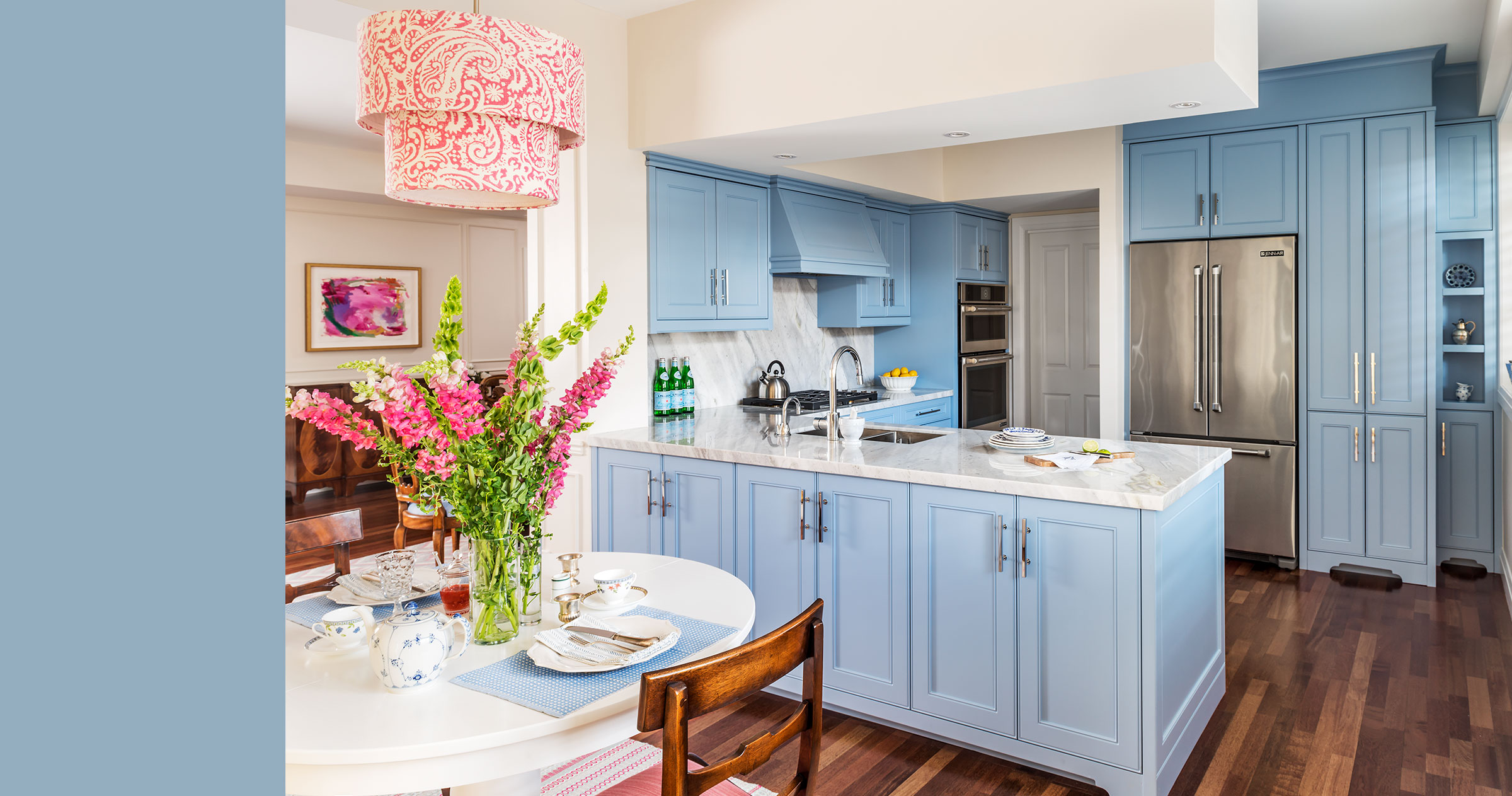 A property that is occupied only part-time can feel impersonal, dreary and anything but homey. Toronto designer Cynthia Ferguson took on the task of injecting personality and warmth into a bland condo for a client whose main residence is in Prince Edward County. The client was moving from a studio into a 1,100-square-foot third-floor unit so she could host her children and grandchildren when they came to town.

“A pied-à-terre can be challenging; you don’t want it to feel like a rental or a hotel,” says Ferguson, owner of Cynthia Ferguson Designs. “My client is very young at heart, so the idea was to make it fresh, colourful, pretty and very easy to maintain so she didn’t have to worry about somebody managing it.”

Initially, the client’s wish list was simple: a coat of paint throughout, and a main bedroom update. But the project soon evolved into a major overhaul that touched every room, including a complete makeover of the kitchen and main bathroom.

“Because the condo is in the Yonge and Summerhill area, it was a smart real estate investment that made it easy to legitimize spending more money to really freshen it up,” notes Ferguson, adding that the only element left untouched was the dark hardwood flooring throughout.

The unit was the first to be renovated in the 15-year-old building, so while there were no condo regulations to wrangle with, Ferguson did have to work within the limitations of the space. “For example, the main bath has plenty of floor space, but it is pie-shaped with lots of angles,” she explains. “We couldn’t move the tub or make the shower bigger because you can’t change the plumbing, but we made it work.”

Grey and white marble provides a classic, timeless look, and lavender kicks it up a notch. “We also took out the door, making it swing the other way so it didn’t bang into the vanity when you entered,” adds Ferguson. “There were lots of little fixes that made a massive difference. My client couldn’t believe it was the same bathroom from where we started.”

In the main bedroom, Ferguson chose a soothing cream-and-blue palette and designed a plush upholstered headboard that the client requested, as she had never had one. “Because of the flatness of the condo walls, I suggested we build in a little bit of texture and colour with the Phillip Jeffries grasscloth,” says Ferguson. “Now, every time my client walks in, it’s restful and peaceful.”

Condo design projects often require custom furniture, because walls cannot be moved to make things fit, says Ferguson, who wove more robin’s-egg blue into the sun-drenched living room with a pair of armchairs and two upholstered stools, plus a cream sofa. “We installed applied molding on the walls, which adds big bang for your buck,” says Ferguson. “It elevates the luxury and sophistication of the space so quickly for a small amount per linear foot.”

She also dressed up the gas fireplace surround and designed the coffee table, which features painted grasscloth topped with glass to create a calm, beachy atmosphere. “It’s a great end-of-the-day spot to read, take a deep breath and hang out,” she says.

In the dining room, the designer reinvented her client’s original dining set with crisp blue upholstered seats, and she customized the lampshades for the chandelier and wall sconces. “We needed something impactful, because the walls were quite short in the dining room,” she says. “We did a custom rug through Kravet; I absolutely love the hint of blue and the pink.”

She aimed to replace the builder’s-beige kitchen with a sunny, colourful vibe. “We wanted it to feel happy and youthful, and my client loves the light blue we chose for the cabinets,” she says. “We used the same material for her backsplash and countertops, which made it feel bigger, and we expanded the island with storage on both sides.”

Ferguson added playful pink paisley fabric to the light fixture in the breakfast nook, and edged the drapery with luxurious embroidered trim.

“We really reinvented this condo for her so it feels special,” she says. “She’s in the city every month, and staying longer now because she loves her condo so much.” •