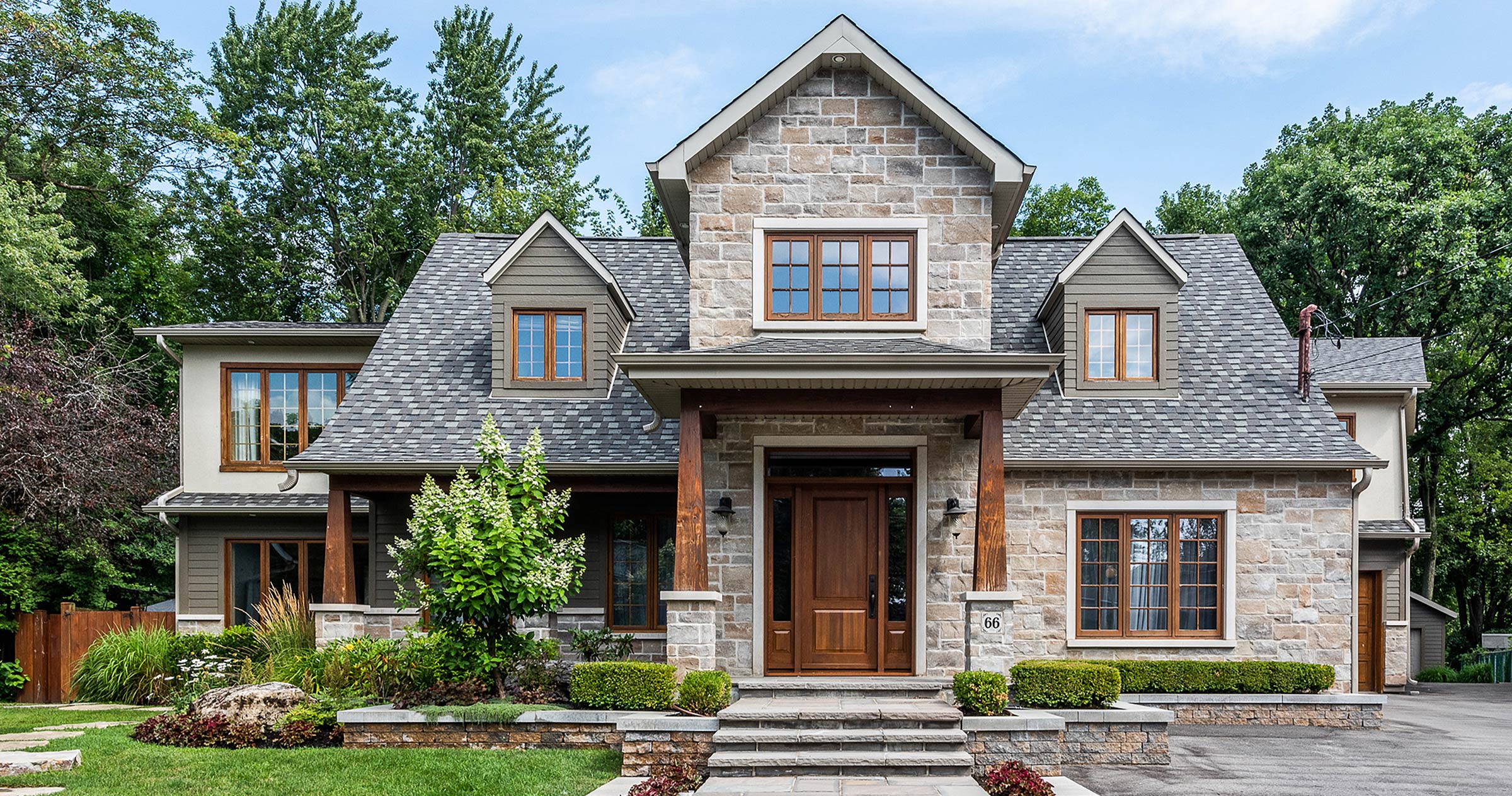 What to do when your spouse is hellbent on buying a home that you don’t like as much? Anthony Fantin faced that dilemma in purchasing a 1981 waterfront property in Ile Bizard. “My wife fell totally in love with this Canadiana-style home with its dormer windows and stone facade,” he recalls. “I finally agreed to buy it, but only if she agreed to the renovations that I had in mind to do over time.”

The result is a bright open home that belies its quaint exterior with an expansive indoor mix of richly varied wood surfaces that reflect its forested setting. “The quality that has gone into this house is indisputable,” says Sylvie Menard, the real estate broker who has listed the property for sale. “The home is now worth 10 times its original price.”

Sloped rooflines had initially made for dark interiors. A solarium company was hired to install windows to make the family room a sunnier retreat. White oak engineered flooring and a hickory finish on the wall that has one of the home’s three gas fireplaces add visual warmth.

A tiny entranceway became a grand foyer through the removal of a second-storey room, which heightens the space. “There’s now a 22-foot ceiling and more natural lighting through the additional windows that were installed,” Anthony says. “And people aren’t up against the stairs the minute they step inside the house.”

The already unique stairwell makes a stronger design statement thanks to the addition of dark wainscoting. A herringbone design puts the porcelain flooring on an equally impressive footing in the foyer. “Everyone thinks it’s marble or natural stone,” Anthony says.

As for the room that was removed … no one misses it. The addition of a four-car garage facilitated the creation of a large master suite above it that includes an ensuite bathroom, a large walk-in closet, and extensively windowed living space overlooking the waterfront. There’s also a nook for a desk. “We made it so that we could live in this master if we just added a fridge,” Anthony says. “And the gas fireplace is lovely in the wintertime.”

The house boasts two ensuite bathrooms. Storage abounds throughout. “I like having the space to keep everything hidden away,” Anthony says.

Other conveniences include the kitchenette with its instant access to stored china, cutlery and linens. “There’s also a built-in coffee station,” Menard says. “And it’s so neat how when you roll up the storage unit’s ‘garage’ door, you can slide out the toaster and/or toaster oven from a pull-out drawer.”

The kitchen’s finishes complement the hickory featured in the family room. The waterfall island has a pure white quartz surface with an induction heating element. “I didn’t want a hood or anything to obstruct the island’s surface,” Anthony says. “Ten or 12 people easily gather around this counter during parties.”

While most kitchens these days are fully opened to adjacent rooms during renovations, the homeowners opted for a partial wall so that any mess after cooking would be out of sight while they entertain guests in the other spaces.

No area has been overlooked. “We made the basement laundry area big enough to be able to dry sweaters flat on the counter and have space to fold everything,” Anthony says. “And that basement shower is great when you get up really early and you don’t want to wake up the rest of the house.”

The backyard features a heated swimming pool and several deck areas that lend themselves to relaxed outdoor living, along with enough lawn for children to run around under supervision.

While close to Montreal, the property seems more like a rural oasis, having some 50 feet of waterfront and bordering protected woodlands. “I don’t see or hear any neighbours,” Anthony says. “Just the birds singing and other wildlife.” •

The Fine Art of Jewelry