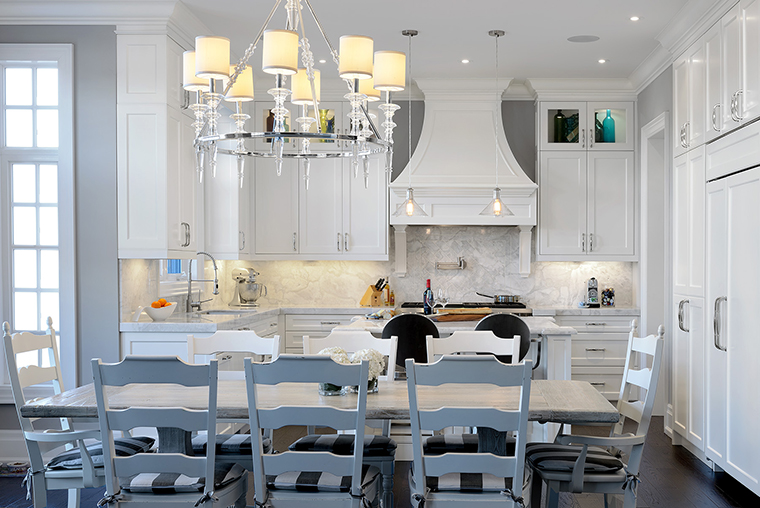 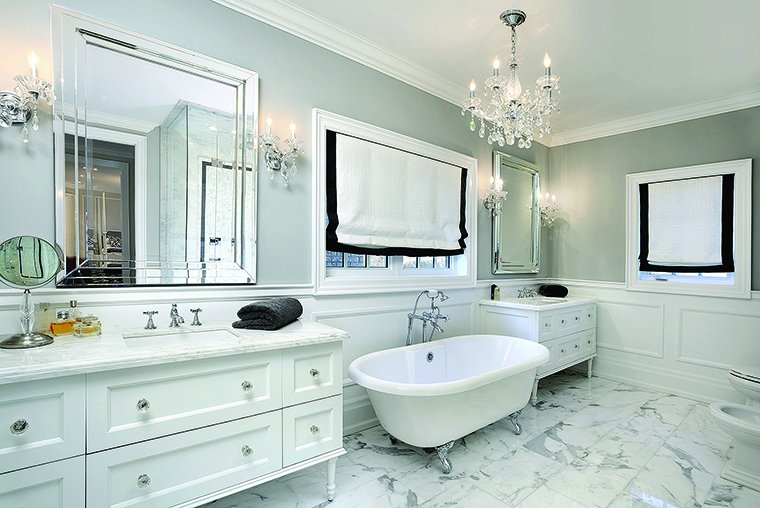 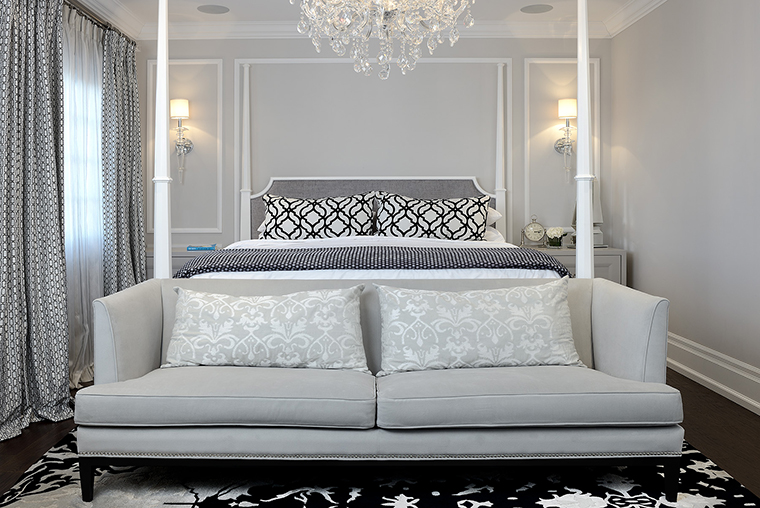 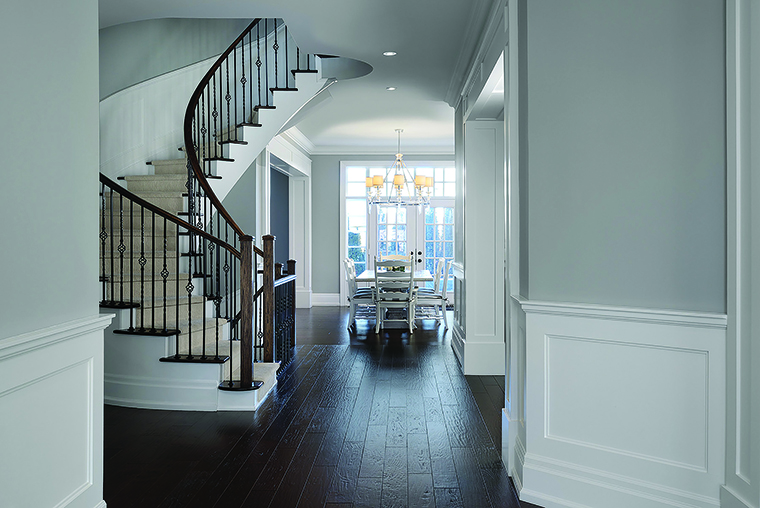 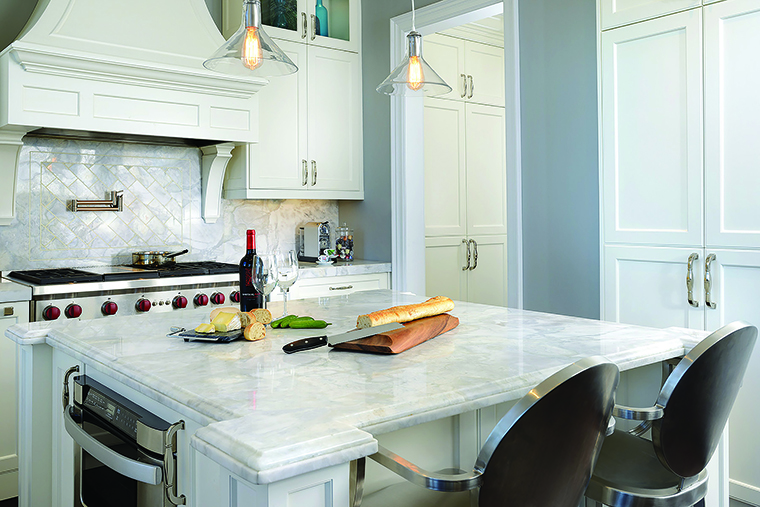 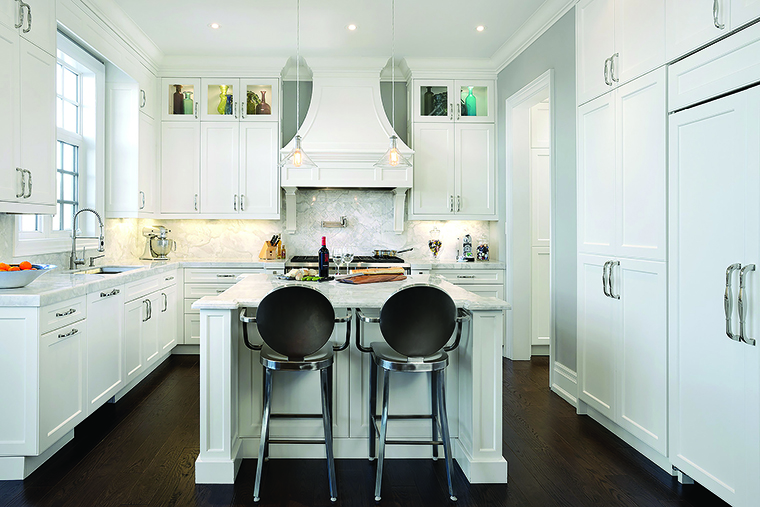 CLOSE TO HOME
A family upgrades by moving across the street

Same street. More space. When Allen and Michelle Aptekar decided to buy a larger home to give each of their four children a bedroom, they opted for the house right across the street. “And we’re not the only ones who’ve done so here,” Michelle says of their Vaughan neighbourhood. “It’s such an amazing street.”
The Aptekars hired Erica Gelman, the principal designer at House of Design, and 360 Reno Group Inc. to convert a fairly new two-storey house with good bones into a tailored home. The couple sought classic country warmth that would endure both the test of time and three boys and a girl under the age of 10.
Gelman praises the Aptekars for doing their homework. “They’re the best kind of clients to work with because they did extensive research ahead of time and had numerous images to show me,” she says.
The couple also put a lot of trust in their designer. “It was initially challenging for us to accept that grey, rather than beige or taupe, was the neutral tone now,” Michelle says. “We’ve learned a lot along the way.”
Wire-brushed hardwood flooring from Vintage was laid in the family room and kitchen because the uneven grooves readily disguise imperfections. “We have Tonka trucks being rolled and crashed on the floors all the time,” Michelle says. “If there’s a scratch, we just use a hardwood marker and it’s gone.”
For a timeless kitchen, Gelman recommended a warm cloud white for the Shaker cabinetry. The custom-built cabinets accentuate the 10-foot-high ceiling, hide a heating/ventilation bulkhead over the fridge, and provide abundant storage.
The home’s original island was replaced with one that is double the depth. A 14-inch overhang creates just enough space for one or two children to hang out with their mom. The built-in Sharp Microwave Drawer offers top-loading convenience.
The Aptekars exercised patience and determination when dealing with details. “They wanted the same kind of handles as on the Sub-Zero fridge,” Gelman recalls.
Gelman sketched the overhead canopy based on designs the couple showed her as inspiration. “The (Wolf) stove with the canopy, pot-filler and tiled quartzite backsplash is my favourite kitchen area because it’s so artistically grand,” Allen says.
After living in their new home for awhile, Michelle decided it was time to redo the master bedroom for their anniversary. She and Gelman searched extensively for a bed with a poster frame that wouldn’t overburden the sleeping area. They had it custom-built and upholstered by Hickory White.
While definitely adult space, the bedroom remains inviting to the children. “They’re always watching TV with us,” Allen says.
The upstairs bathroom was reconfigured around the clawfoot tub Michelle adores. “I really wanted a new bathtub, fixtures and hardware with a vintage look,” she says.
“The investment that Allen and Michelle have made in all the detailing transformed a cookie-cutter house into a quality home that uniquely reflects their personalities,” Gelman says.
And the move into it was just across the street.