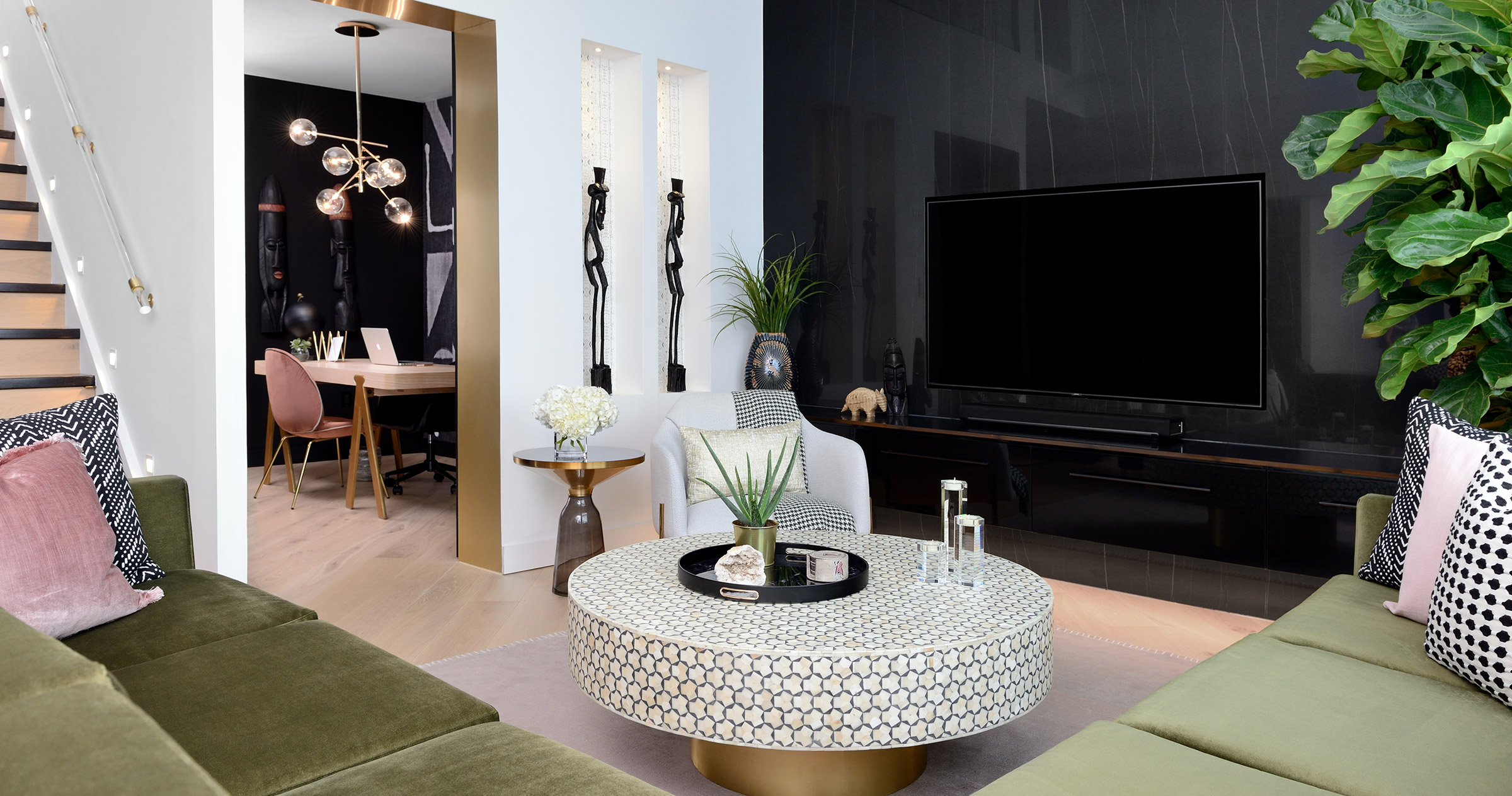 Iman Lalji and her husband spent nearly a year looking for a fixer-upper apartment in downtown Toronto. After about six months they had found a building with a floor plan they loved but “because we were out of town we lost out on putting in an offer,” Iman says. However, losing out turned into “a blessing in disguise,” she adds: “I was really disappointed, and I ended up following this floor plan closely. It came up again about six months later. The place was a disaster, so it was the perfect opportunity.”

This “opportunity” had been tenanted by humans with dogs and was rundown, with holes in the walls and carpet stains. But its 1,700 square feet cover two storeys running the width of the building and offering both north and south exposures. The living room ceiling is 18 feet high. There are three bedrooms and three full bathrooms. And, unlike the other apartment, it has a terrace, which even had a gas line already installed.

Iman is the owner of Designed By Iman, and her designer’s sense was piqued. She and her husband were the first to see the apartment, and they immediately put in an offer.

Iman says that renovating and decorating the place “was a progression. My concept was that not only do I want a beautiful place to live in with my husband, but it has to be something I can also show to clients. It must reflect my skills.”

She ended up with decor that suited both herself and her husband, expressing both their personalities. She characterizes it as “glamorous and luxurious but not gaudy.” She and her husband trace their origins to Africa, where their parents were born. African design is a motif repeated throughout the apartment in murals, sculptures and other accessories.

Iman describes the decor as “lots of black and white and gold with big pops of colour.” She laments, “Most clients are scared of colour and end up not adding their own personality to their decor.” Her design choices give her the opportunity to show clients how bolder can be better.

The black and white scheme is a relatively neutral background for the array of colours used in the apartment, with a different palette for each room. For instance, the guest room is more yellow, the master bedroom is blush pink and burgundy, the main living area is green and pink. Subtle use of Lucite for such items as handrails, candle holders, and cabinetry pulls adds neutral sparkle. White oak floors throughout are a deliberate choice: “A casual floor allows more bling above,” Iman says.

An aesthetic that informs the entire space is less obvious than the bling and the colours: “We’re both vegans; we use no animal products,” says Iman. “Our home is vegan as well. The entire home is cruelty-free, with no leather, suede, silk, etcetera. We use bamboo bedding and organic cotton towels. Two of the rugs contain wool, but it was purchased from a web site with vintage products. We have several pieces – such as a coffee table – with bone inlay, but it’s recycled bones of already-dead animals. We use green cleaning products, too.”

Various alterations to the original structure demonstrate how changes that are not necessarily obvious can improve the functioning of daily life. For instance, Iman borrowed space from the generously-sized entrance foyer to install a walk-in closet for outerwear that also has a space perfectly sized for storing a double stroller out of sight.

In one of the guest bedrooms, she turned a standard-size closet into a closet plus recessed desk with a surface large enough for setting down a suitcase. The master bedroom cabinetry has a built-in jewelry organizer and a hidden clothes hamper.

Storage space was built in under the stairs, and even the stairs themselves serve a dual purpose: several of the lower risers are actually drawer fronts, and with a pull on a discreet tab, the drawer slides out to offer space for such awkwardly sized items as rolls of wrapping paper.

For the ultimate in function, the home is fully automated. “Temperature, music, lights are all controlled with voice commands,” says Iman. “We have even automated our drapery. In the morning we can say ‘good morning, Alexa,’ and the drapes will open, lights will come on, she will tell us the temperature and an interesting fact.”

As a design professional, Iman sets her goal “to inspire and hope that other people want to do the same, to create beautiful spaces. It’s not so much about the material things that make a space nice but the memories.”

As her own designer, Iman says of achieving her aesthetic of “modern luxury with a hint of tribe”: “Oh my, it’s difficult! Up until now it has been so easy to say ‘You need x, y and z,’ but when it comes to yourself you have to dig deep. What was most difficult is that I didn’t have a sounding board. You almost kind of wonder if you’re crazy. It was a difficult process, but I’m happy I went through it.” •