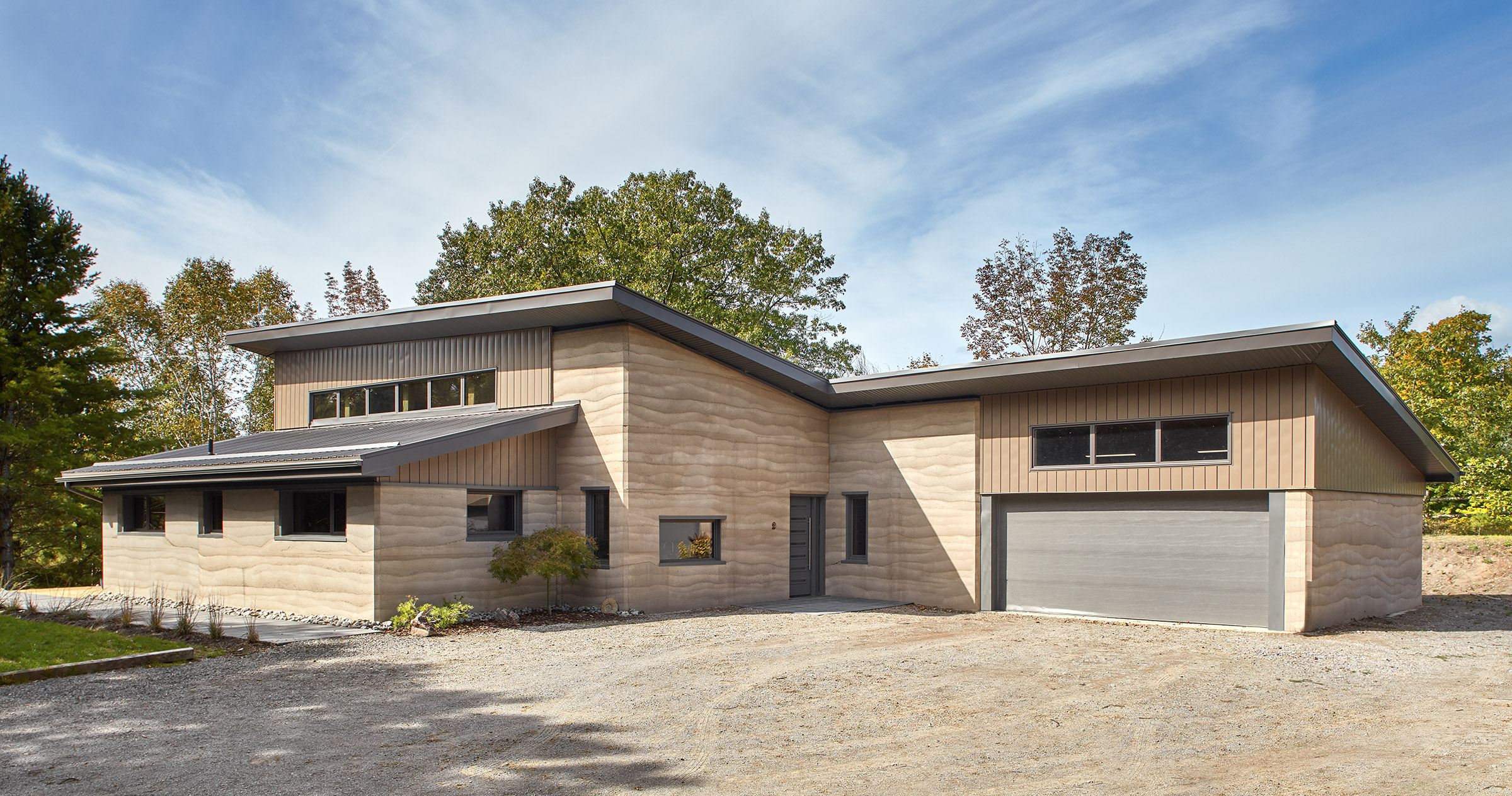 Of The Earth And For The Earth

Rammed-earth homes, made of compressed subsoil, are an ancient building technique, revived as a sustainable option

Sylvia Cook was approaching retirement from her career as a high-school physics teacher when she began looking for a dream home for her husband and herself.

She wanted its construction to be as kind to the planet as possible. “I looked into the most sustainable ways of building a house and kept coming back to rammed earth,” says Cook, who founded Aerecura a decade ago in Castleton, Ontario, to construct the first insulated rammed earth home in the province for herself, and subsequently built more such dwellings for others.

“Most of the home is made with subsoil, available in abundance pretty much everywhere on Earth, as opposed to almost every other building material that has to be processed or shipped a great distance, or removes precious topsoil,” Cook says. “We use what’s left once the gravel has been removed from a local pit for other purposes.”

Cook’s home not only met her sustainability goals, but captured her heart with its natural beauty, consistently pleasant warmth, and overall quietness, created by its striated walls. “As musicians, my husband and I appreciate the wonderful acoustics, too,” she says.

She originally teamed up with architect Terrell Wong, the president of Stones Throw Design Inc., to create her home. Their companies have since partnered and they build several homes annually.

“The walls tell each home’s story,” Terrell Wong says. “You see the layers, all of which can be made as wavy as our customers want; each layer is distinctive and has variations in colour,  shape, and tone.”

Rammed-earth buildings are, as the name suggests, constructed of layers of compressed earth. The building process involves compacting a damp mixture of  sand, clay, gravel and a stabilizer into an frame or mold to create walls. The building method lends itself to creatively sloped or curved walls, soft colouring, as well as imprinted designs. “You can do many things with rammed-earth homes, but straight walls with openings that extend to the top of the wall make construction simpler,” she says.

Construction costs run about 10 per cent higher than traditional building, but the difference is soon recouped through energy efficiencies. “In Sylvia Cook’s home, we used heat from the hot water tank to put radiant heating in the floor below the living area. The only other heat source is an infrared panel in the dining area for the occasional cold evening,” says Wong.

Predesigned rammed-earth homes use simple electric baseboards, she says, because they consume less than 25 kilowatts per square metre for heating; she adds that there is typically no requirement for air conditioning in rammed-earth homes.

“We recently built another 3,000-square-foot home that consumes only a third of the energy of a comparably sized stick-frame building,” she says.

The house’s thermal mass establishes a stable microclimate. “There’s no big swing in temperature or humidity once the home is warmed up because the walls naturally absorb and then spread any heat or moisture until they’re all the same,” Wong explains. “This absorption makes it easier to incorporate solar heating without glassed areas becoming too hot when the sun is strong.”

Another advantage is the lack of maintenance. “You don’t need to install and maintain a furnace, never have to paint, nor replace siding,” Wong points out. “The walls are strong and more ductile than concrete so under expected stresses, they do not crack.”

Modern stabilization and waterproofing technologies have improved the enduring technique used in the Great Wall of China and introduced to Europe by the Romans 2,000 years ago. “Numerous peasants built rammed earth houses after the French Revolution but these homes were subsequently considered lower class and covered up with stucco to look more like area châteaux,” Cook says.

“These homes are built to last centuries and withstand the extremes the climate crisis is throwing at us – fire, floods, and even earthquakes – with their modern stabilization,” she adds. “Obviously, they won’t save the Earth’s climate all by themselves, but I’m hoping they will change the climate within the building industry towards more sustainable construction methods.” •

New Trends in Ceramic and Stone