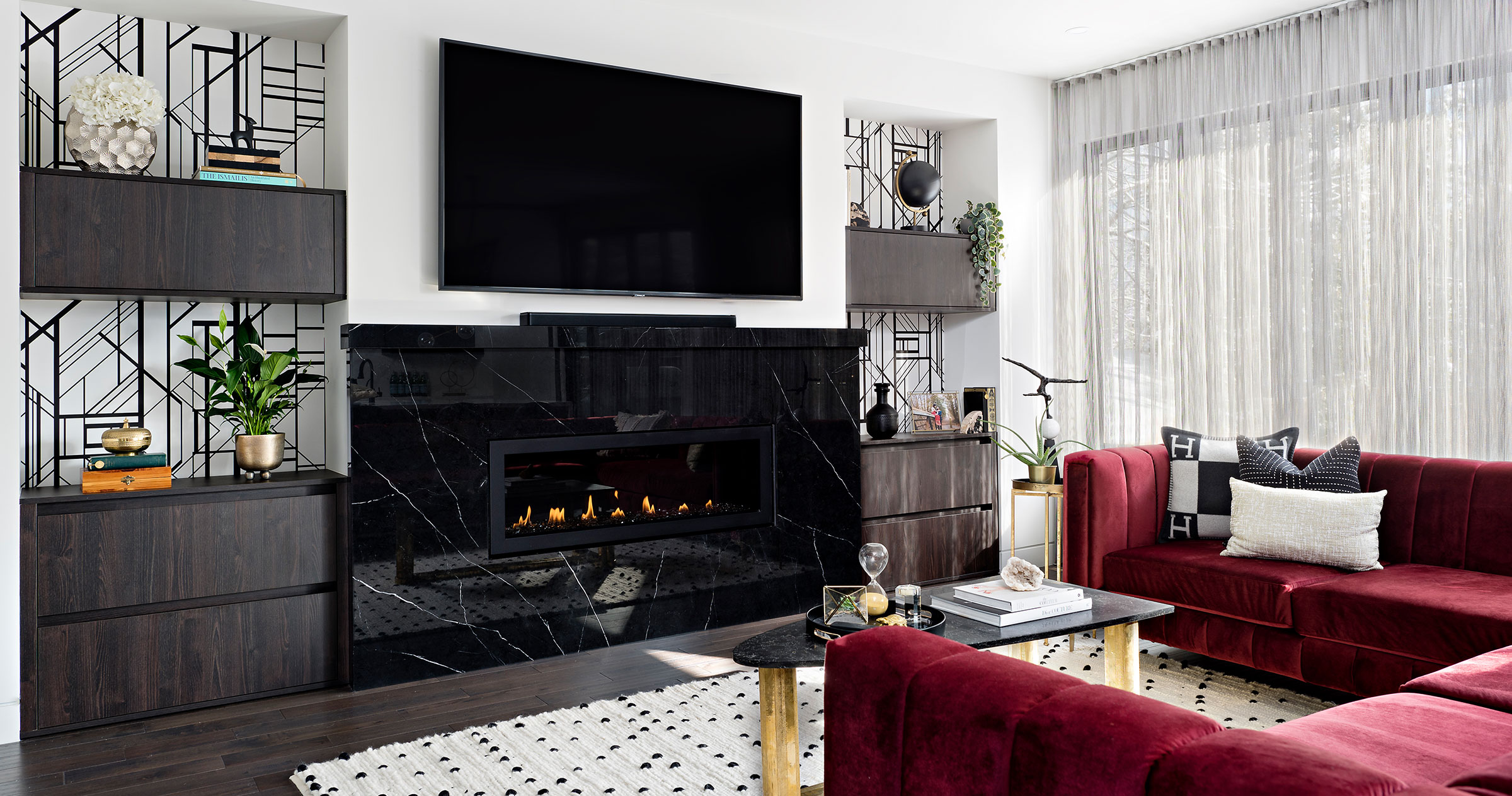 Who would go househunting while pregnant, on a tight schedule, and looking for something very different from their previous home—and get everything they wanted with only a minimal amount of muss and fuss? The couple who are the owners of this dwelling, that’s who.

They began looking to expand from their one-bedroom condo in downtown Toronto when thinking of starting a family. “We had been looking for over a year, but pregnancy made us serious about it,” says the wife. “We put a little more realism behind it.”

Their real estate agent was diligent in finding out what they wanted and needed, and eventually brought them to this newly built home in Port Credit. The homeowners were slightly dubious about living so far from downtown, but the house was in pristine condition and had a good back yard, and they were won over.

It turns out that those aren’t the only perks. “It’s an amazing neighbourhood,” says the wife. “We found that out once we moved in. We discovered that it’s baby-friendly. It’s on a very quiet street with little traffic. Nearly every house has little kids. We live in walking distance to a library and a park as well as Montessoris and daycares.”

The home’s 2,800 square feet feature social areas (kitchen, dining room, living room) open to each other, making for good circulation when the couple’s many family members and friends come to visit. The private areas include the main bedroom with ensuite bathroom, a bedroom that has been turned into a nursery, a guest bedroom with ensuite bathroom, and what is for now a spare room that shares the hallway bath.

The homeowners are thrilled with all the newfound space. “Each bedroom has a wall-to-wall closet,” says the wife happily. “The other closets are large, too. It’s especially handy in the nursery when I’m stockpiling diapers. Those are things I had not thought of in identifying the house.”

But all those rooms need filling, and diapers just don’t cut it. Enter Designed by Iman, in the form of owner Iman Lalji. Having met Lalji through common friends, the homeowners came to admire her design sense. “I loved her attention to detail and her intuitiveness, her ability to pick up on what my taste was,” says the homeowner.

“The condo was from a different stage of their life,” says Lalji. “They were changing from just a couple into parents. They wanted something unique, put-together.”

Lalji and the homeowners chose a luxurious ambience. There was some balancing to be done, some compromising: the wife liked a bit of bling, the husband liked black. The resulting colour scheme is a sophisticated neutral base of black and white, with metallic glints and hits of colour punctuating the rooms. “I pushed the colour envelope a bit,” says Lalji, recalling that the wife eventually accepted the burgundy-coloured sofa after a bit of urging.

The green dining chairs and the green bench in the master bedroom were a different story. “Iman was trying to force green on me,” says the wife, who initially was quite dubious. “She showed me what colours were up and coming in decor, and I finally gave in. Now that couch and those green chairs are my favourite things in the entire house.”

Some design choices were serendipitous; for instance, the black wall in the dining area. The dining table was custom-made in India and features a bold pattern made with bone inlay. Against the white walls, however, the bone had a slight yellowy cast. Lalji’s solution “at the eleventh hour”: add molding to one wall, paint it all black, and turn it into a dramatic feature that enhances the look of the table.

That gambit is typical of Lalji’s approach in the home. “It was more about decor than physical changes, about finding the right colours and tones,” she says. “We did make some physical changes, however. For instance, we installed our choice of chandelier above the dining table rather than keep the silver-toned fixture that was already there. The niches on either side of the living-room fireplace were bare, and I added storage cabinets.”

The kitchen fixtures had a silvery finish, so Lalji switched the faucet to one in matte black with a satin brass detail, and she installed more impactful light fixtures above the island to add more bling. Even the laundry room got a more polished look with wallpaper and a countertop over the machines.

The homeowners and their little girl have lived in the home for just over a year, and it has surpassed its promise. “Working with a designer is one of the best processes I’ve been through,” says the homeowner. “I love how resourceful Iman is. No one else has the same wallpaper that we do. I love the uniqueness of my home.” •