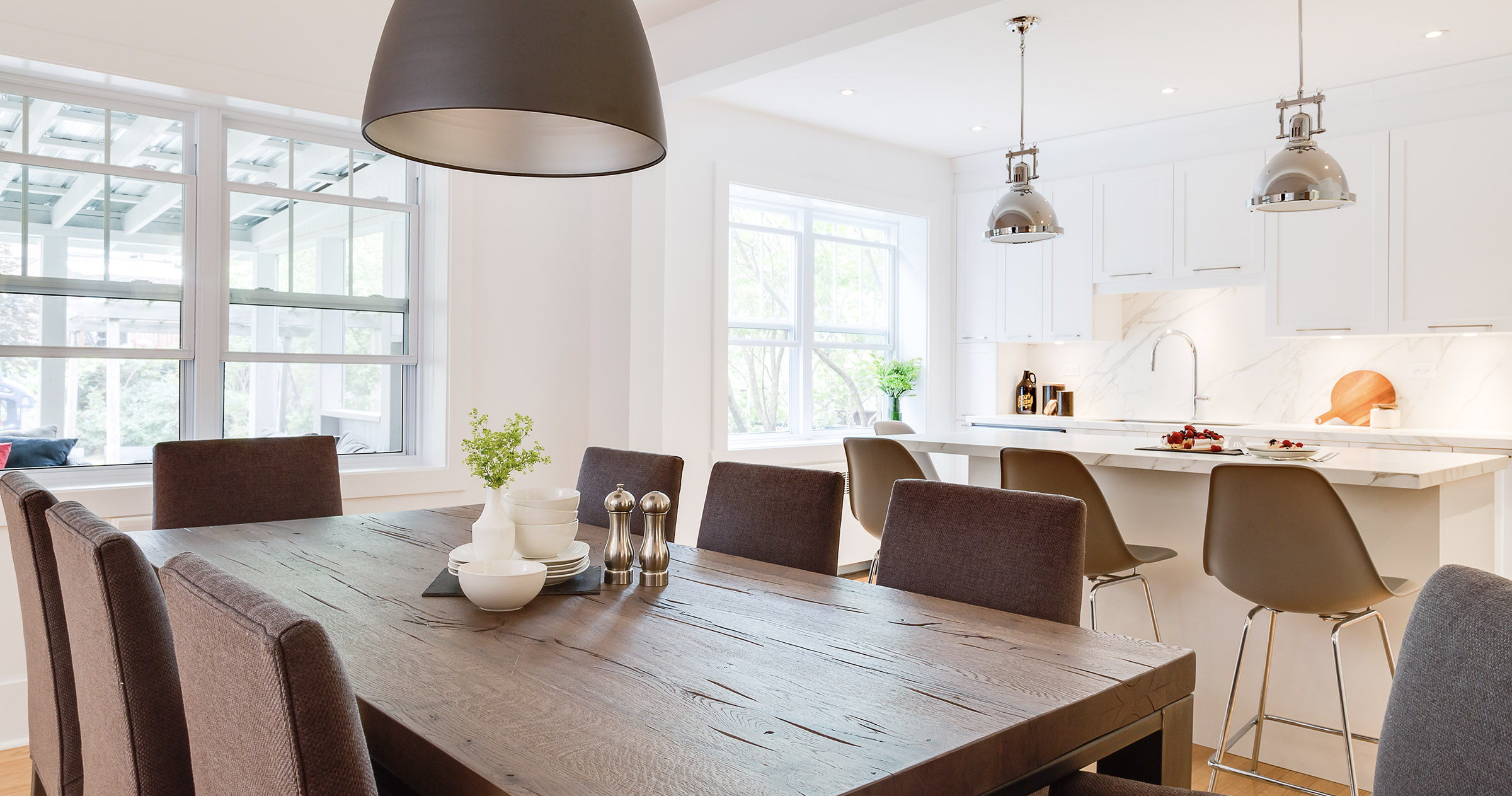 “Everything must go” was the prime directive issued by the homeowners prior to this kitchen renovation. Mathieu Huard and Justine Côté had lived in the five-bedroom two-storey home in Notre Dame de Grace for less than two years. Built in 1953 as a duplex and then later converted to a single-family home, the house’s kitchen was hopelessly outdated. “It was in the wrong place and had awful faux wood cabinets,” recalls Justine. “The only thing we kept was the beautiful hardwood oak flooring.”

The kitchen update was part of a larger renovation of the entire 1,000-square-foot first floor. The structure was stripped down to the studs and insulated. The kitchen remained at the back of the house, but was relocated to the opposite wall. That meant the original one was operational during construction. It came in handy for Justine, who was home on maternity leave from her job as a clinical pharmacist and expecting their second child at the time.

As for the new design, it was more about “fiat lux” for the couple. They wanted an open-concept floor plan and a kitchen flooded with natural light. And although as young professionals their tastes are more on the contemporary side, they didn’t want the kind of stark design they had previously lived with in a condo. “We live busy, complex lives and find pure and simple lines relaxing to come home to,” Justine says.

Retaining some of the home’s mid-century style was also important to the couple. It’s an approach that suited interior designer Korina Khamis, principal designer and co-owner of Hibou Design & Co., whose team handled the main floor transformation. “Sometimes, people overdo it when trying to get a modern look,” Khamis says. “But when done right, mixing traditional and modern style can create a look that is timeless and easy to live with.”

An all-white colour scheme was chosen for just that reason. While it’s not only the most popular way to go today, this designer strongly feels it is a look that will not be dated for at least 10 years. For the kitchen, Khamis proposed the Shaker-style cabinets and ran crown molding across the top to honour the home’s past. The cabinets’ slightly elongated, vertical profile plays against distinctive chrome handles, which are set on the horizontal for a contemporary flair.

The island top and countertops are adorned with the elegant look of white marble with subtle grey veining. It is marble in appearance only, as the ultra-durable composite material called Neolith, is a combination of quartz, porcelain and glass, chosen with durability in mind. The designer also used the same slabs on the backsplash to flow seamlessly from the countertop.

Beside the refrigerator stands a pantry and a bar with even more storage. Glass-panelled doors were added to the cabinets above. In addition to providing a place to display prized glassware and serving pieces, the panes echo the windows on the opposite side of the room.

Beyond the dining room lies the playroom, designed with the two children, now toddlers, in mind. There are built-in benches for them to clamber on, and storage underneath in which to stash their toys. In contrast to the neutral palette used in the kitchen and dining area, bright colours are used in throw pillows and seat cushions.

Justine most appreciates how she can easily see the children from the kitchen island.

“The island is my favourite spot and the place we seem to use the most,” she says. For this reason, she chose counter stools as much for their comfort as for the stylish Eames-inspired mid-century look. And she was adamant about not having a sink there, preferring an uninterrupted seven-foot-long surface upon which to prepare meals.

The couple also find it is easier to feed the children there than at the dining room table. Even though its natural oak top and metal frame are sturdy enough to stand up to any child’s abuse, it is mostly used when entertaining.

“We love the kitchen, with its open, uncluttered look and just enough personal touches that reflect our sense of fun,” Justine says. •

Serenity By The Sea