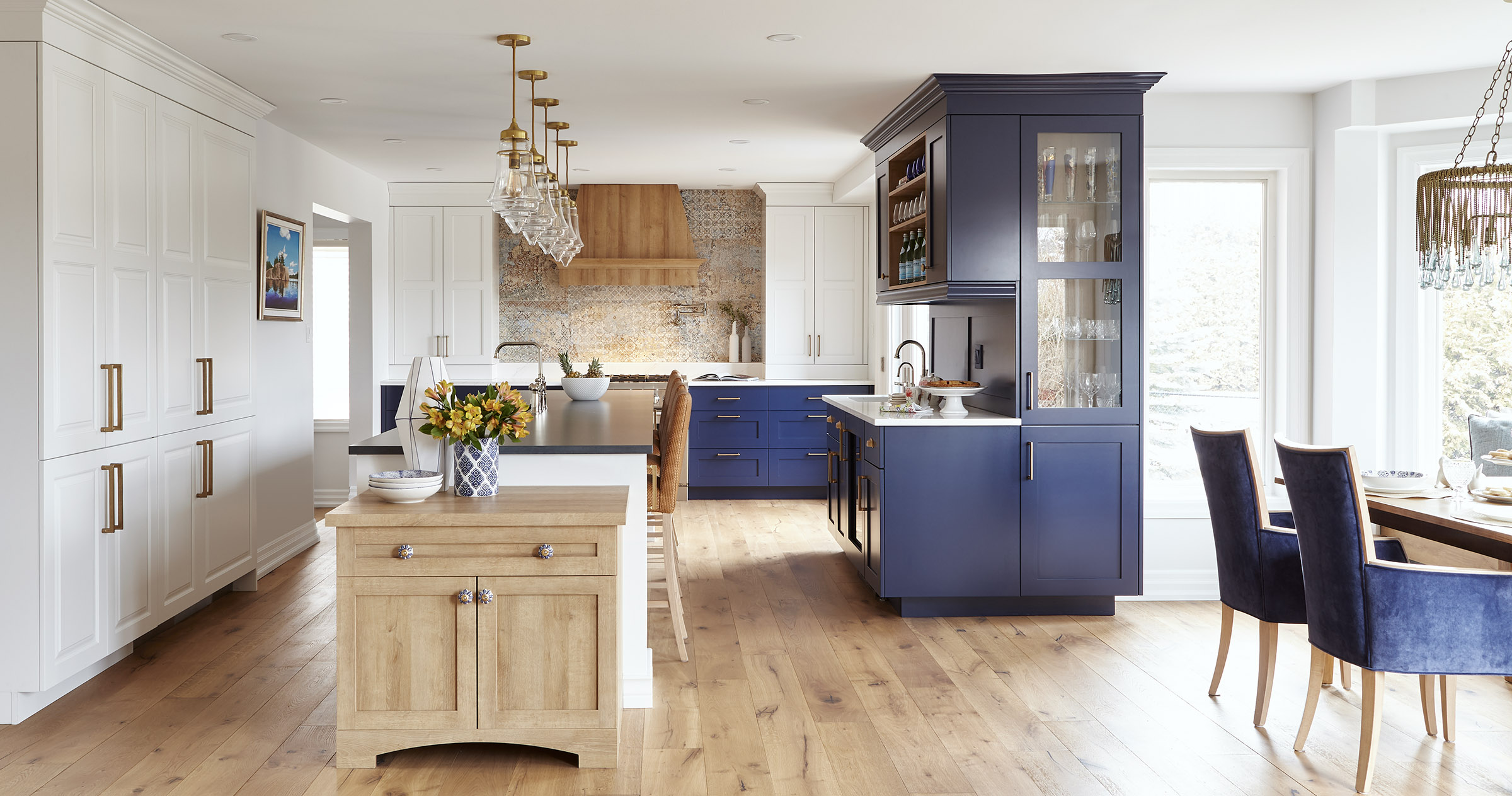 Leslie Ray wanted a white kitchen. “I wanted something bright and light,” she says.

But she wasn’t going to get it with this kitchen in the state it was in when she and her husband, David Kennedy, bought the house. The cabinetry was dark, the countertops were black, and the floor in the work area was green tiles that did not complement the surrounding narrow-plank hardwood floor.

Leslie and David nonetheless recognized that this house in Newcastle had good bones and, by gutting the back of the building, they could get the open-plan kitchen and family room they wanted.

Leslie is a chartered professional accountant with her own business, Ray & Co. One of her offices, in Ajax, is beside that of Square Footage Inc., a design firm whose motto is “clever kitchens.” It seemed natural to turn to Square Footage’s creative director, Frankie Castro, for her expertise.

“Leslie and David had downsized dramatically to move into this house,” Castro says. “They still wanted the grand feeling they were used to, but this house had three small rooms: kitchen, dining room, and breakfast nook.”

The 280-square-foot kitchen was dysfunctional, she says. The work area was a little U shape, with an old-fashioned peninsula, not the island that Leslie and David wanted for when they entertain. The sliding doors to the backyard were awkwardly placed in the centre of the breakfast nook’s bay. The dining room was isolated, and Leslie knew that they’d seldom, if ever, use it.

A total gut, down to the studs, was called for. David, who’s in the commercial flooring business, did the demolition. Then Castro and her team radically redesigned the space. They knocked down the wall between the kitchen and dining room to extend the kitchen, now a comfortable 450 square feet. They also relocated the sliding doors to a corner of the kitchen, leaving behind a bow window that could accommodate a fitted banquette and dining table.

Details of the redesign were left up to Castro. “We told Frankie we wanted a more open concept with lots of counter space,” Leslie says. “It had to be bright. We also knew for sure that we wanted to be able to access the backyard from the end of the house, where we have a covered deck, and we wanted a beverage bar. And we also mentioned having a built-in fridge. Otherwise, we left it quite open.”

Castro made the initial selections in terms of style, appliances and furnishings, giving Leslie and David a few options from which to choose whenever a decision had to be made. One of the biggest decisions was the tiles used as a backsplash behind the stove.

There’s always a jumping-off point in every project, Castro notes. “The tiles were our idea,” she says. “They’re so decadent. We found the tiles and said ‘We have to work with that.’ They’re 20 inches by 40 inches and are challenging to work with, but the effect is well worth it. We just love the colours in them.”

Indeed, the tiles inspired the room’s colour scheme, combining white and blue cabinetry with the pale but warm colours of the floor and the furniture at the end of the island.

“When we picked the blue, I had no idea that blue was [David’s] favourite colour,” Castro says. “It makes a very bold statement but is tempered well with a lot of white, so it was easier for [Leslie] to adopt the blue. The colour scheme is obvious but not in your face.”

For Leslie’s part, the backsplash behind the stove is one of the kitchen’s highlights. “I love it with the natural wood effects,” she says. But it’s the breakfast nook, now made into a full-fledged dining area, that really excites her: “My window seat – I love it there,” she says. “The sun comes in in the morning and I love sitting there.”

The lights over the island and the dining table are also noteworthy: Leslie and David couldn’t get them shipped to Canada, so on a family trip to the United States, they made a point of finding them and bringing them back. There are numerous other amenities and special touches that Leslie likes: the cased-in fridge and dishwasher, the microwave oven in a drawer, the instant hot water available from the beverage bar tap. And “the cupboard space is great,” Leslie says. “I’m having a matching cupboard built in the mudroom as an overflow pantry.

“I still have to pinch myself that it’s our kitchen. There’s nothing in it I would change.”

An Outdoor Space For Family Fun