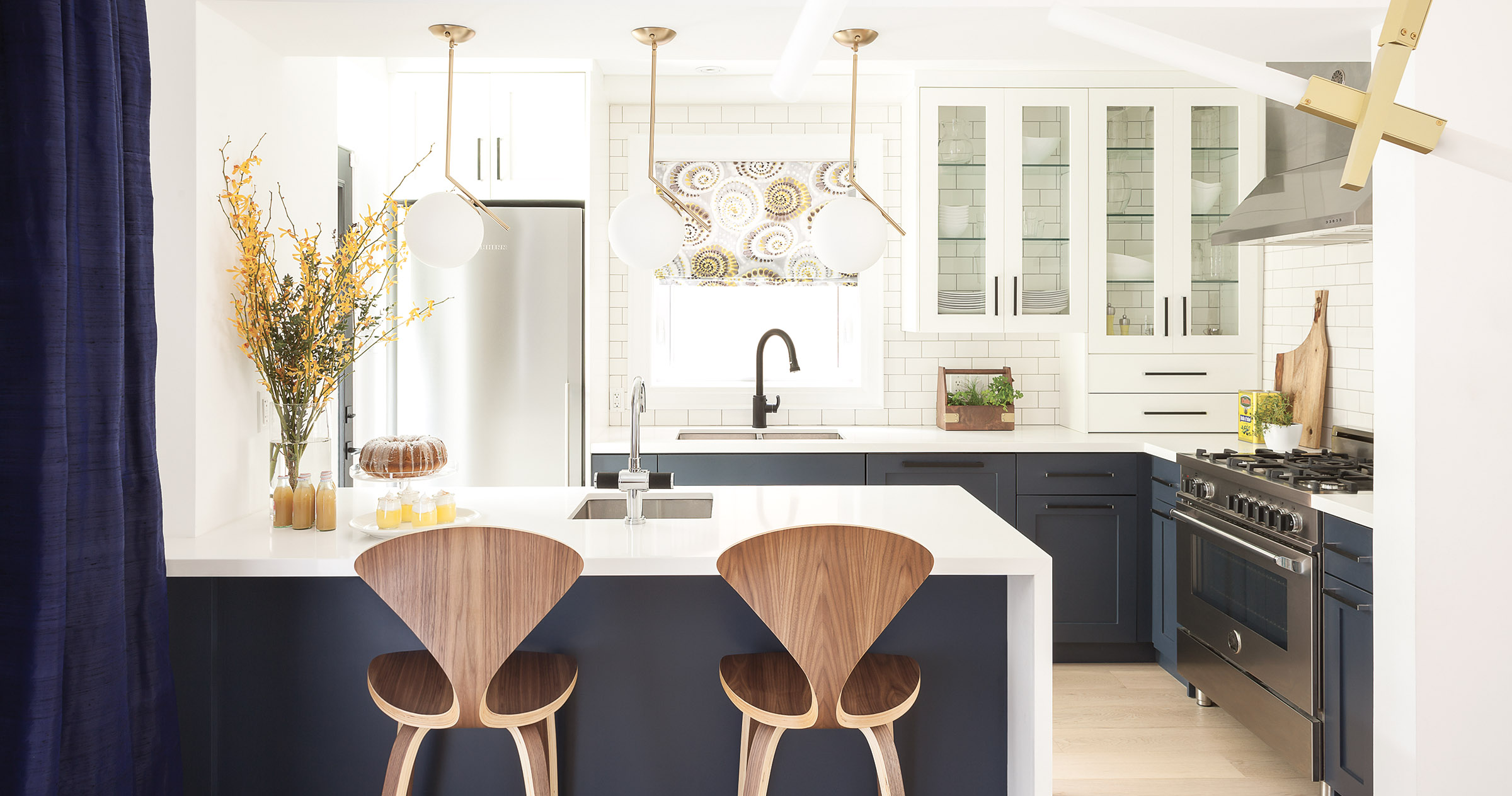 A small kitchencan be made to feel spacious, bright and sophisticated with the right choices, as interior designer Barbara Milner recently proved in her own house.

“I wanted my kitchen to be kissed with sunshiny rays of happiness that I think I achieved through small bursts of yellow and brass, along with playful faucets, and a few other unexpected but restrained elements,” says the owner of South Hills Interiors in Toronto. “For instance, brass pulls are all the rage now, but I chose quieter black and chrome handles instead.”

She was drawn to the modest home in the Casa Loma neighbourhood because its treed yard makes it feel like a cozy cottage in the city. While respecting the home’s traditional character, Barbara introduced contemporary twists to open and lighten the 11-by-nine-foot kitchen space.

A small area is no reason to shy away from colour as long as it’s used sparingly or is effectively contrasted. “I chose blue to ground the space; but the white everywhere else, along with the light floors, maintains the overall airiness,” she says. “The white quartz countertop and waterfall give the lower cabinetry a bright, modern edge.”

Planning began with the professional gas range that Barbara had to have. “I knew a 36-inch range was large for the space, but decided to make it the kitchen’s showpiece, adding the commercial-grade hood as well.”

To give the stove and hood centre stage, Barbara removed all the upper cabinetry from that wall and installed subway tile to the ceiling. “I had to get rid of a few things, but gladly did so to eliminate that corner’s former shadowy boxiness.”

A sleek fridge complements the stove, while the dishwasher is panelled to prevent a look of choppiness. Barbara also tucked a ventless washer-dryer under the island so she wouldn’t have to head for the basement laundry room.

M.C. Kitchen Industrial in Markham custom-built the doors on the lower cabinets with timeless Shaker insets, while the upper cabinet doors are flush. “We wanted a fresh take on traditional warmth,” Barbara says. “When you’re already paying for a custom-built kitchen, you can explore different options rather than have everything match – and it’s those subtle differences that really make a kitchen stand out as unique.”

The faucets, sinks and cabinetry hardware are all Canadian brands. “Ordering local products supports the economy, cuts down on shipping time and costs, prevents border delays, and makes it easier if something has to be replaced,” Barbara says. “Plus, there’s less of an environmental impact, which is very important to me.”

By allowing the walls’ subway tiles to shine through the glass-fronted upper cabinetry, the designer added an element of interest that pays tribute to yesteryear while making the space feel as open as possible.

She took her time deciding on the Roman blind, ultimately selecting fabric that had caught her attention months earlier. “The watercolour pattern has a bit of a ’70s retro feel to it but with a round spin that goes with the pendant lighting,” she says. “And I just fell in love with the contemporary slant to the otherwise simple orbs.”

Barbara integrated some of the natural wood elements that she loves in every kitchen, albeit in an unconventional way. She chose walnut counter stools. “They stand out because of their simplicity but still have that warm grain,” she says. “By keeping my choices simple, I let each feature have its moment without competing with other elements.” •

A Dream Project In Hockey Heaven