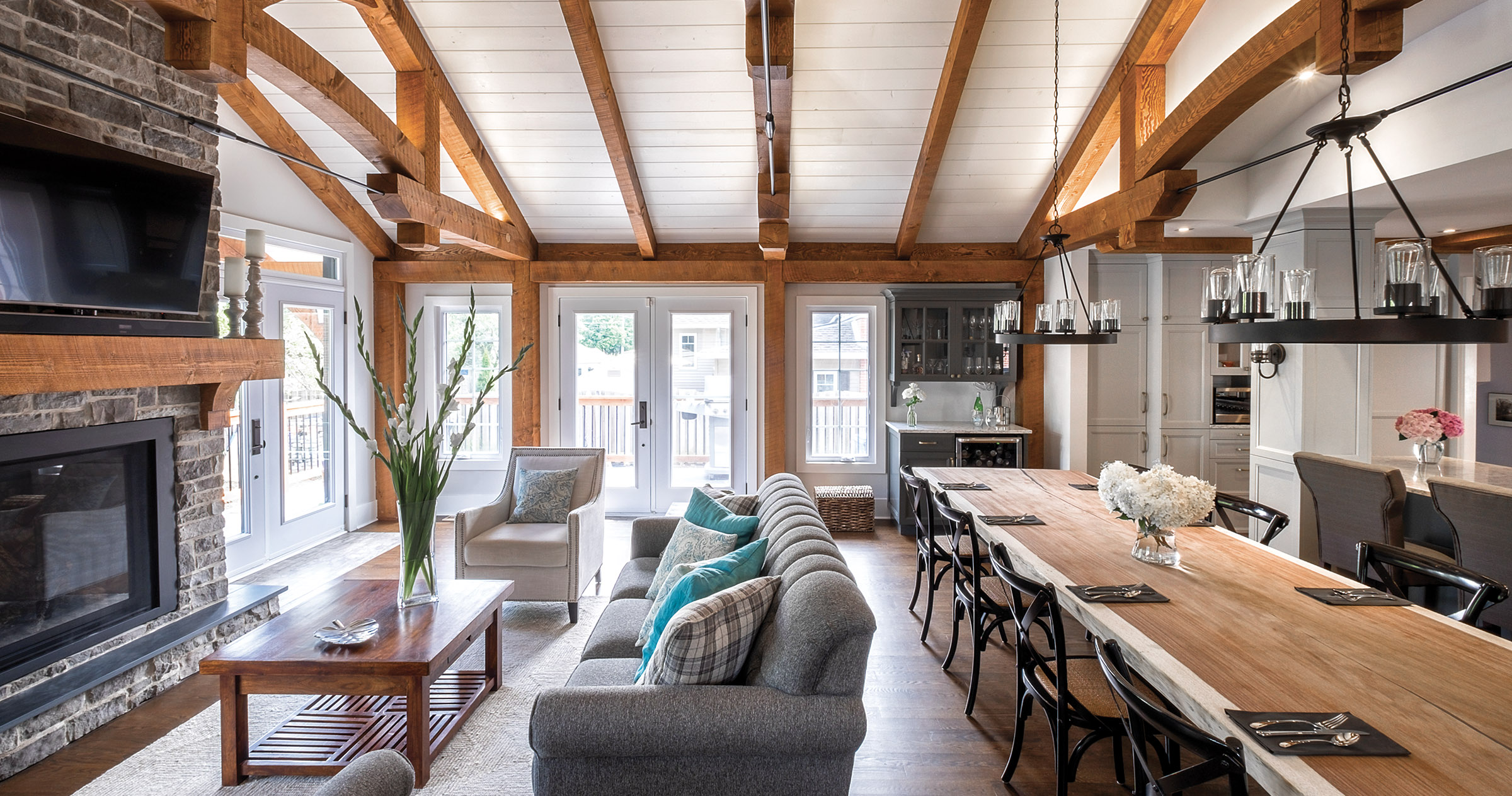 It was a question of balance: How to incorporate heavy timber trusses into a room without overpowering its interior design. That’s exactly what interior designer Sheryl Johnston of Design Essentials Group achieved in her design of a new great room in Pointe Claire.

“I looked for ways to keep the eye moving from the overhead trusses to all the other elements – everything from the antiqued pine range hood to the metal-framed chandeliers through to the large fireplace and French doors on the far wall,” says Johnston.

The couple initially wanted a small extension for a dining room, but Johnston, who’s also a neighbour, showed them how they could expand and transform the ground floor of their 1950s split-level home.

Claire welcomed a design that would allow family and friends to chat with her as she prepared meals without having to repeatedly ask them to step aside from the stove or sink. “I put all of the snacks at the far end of the island now,” she says. “It works beautifully.”

Johnston initially suggested faux beams but, as a woodworking enthusiast, Richard wanted real timber. He did some research and put Johnston in touch with Canadian Timberframes in Parson, B.C. “I couldn’t be happier with the structure and how all of it arrived – including the ceiling and wall panels – on a flatbed truck ready to install,” Richard says.

Sales representative David Gagné and designer Garrett Cox worked with Johnston to ensure the framing met Quebec construction specifications and municipal bylaws. “We included steel tension rods to prevent the trusses from moving, even if there’s heavy snow on the roof,” Gagné says.

Once the plans were finalized, everything was cut, numbered and stained or painted for Éco-Habitation le Draveur, based in Saint-Hyacinthe, to unload by crane and assemble. “They definitely have the necessary expertise,” Gagné says.

Richard praises the yesteryear look that Canadian Timberframes achieved by using an old-fashioned circular saw and wire brushing to bring out more of the fir grain before staining the wood. “Some of the round wooden pegs form structural joints but the other dowels are simply to hide screws and other metal fastenings, so it looks as if it’s all made of wood as it once was,” he adds.

Johnston called upon Cardilli Construction to custom-build everything that wasn’t part of the timber-framing kit. “An excellent mason taught by his father, Marco Cardilli was the ideal person to create the large fireplace,” she says.

Advised by Johnston, the homeowners shopped for a gas insert. “She told us to look at the actual flame of each one at the store, which I never would have thought of doing,” Claire says.

French doors flank the fireplace on each side, welcoming in natural light and fresh air. A third set of doors on a side wall leads to a deck.

Tailored seating surrounds the fireplace. Claire selected sofa fabrics coloured with specks of grey and brown to help conceal any stains the couple’s two young children and large dog might cause. “I also wanted a style that would stand the test of time,” she says. “We can reupholster it all one day, if necessary.”

Plain and plaid cushions pick up on colours of the stone and wood elements while the turquoise adds a playful touch. “Good design always adds unexpected elements,” Johnston says.

Another example of that good design is the wood panelling around the kitchen sink that Claire requested. “Once we went with the much larger gas range than we’d ever intended, Sheryl recommended building an oven hood out of wood as well,” Claire says.

Metal cross-backs and strappings anchor the chairs along the 12-foot table that Richard fashioned from a slab of parota wood from Costa Rica. It has a cast-iron base that he purchased online. In the kitchen, the upper cabinetry is light grey; the lower is dark grey. The two tones soften the industrial sheen of the appliances.

We chose a timeless marble pattern for the quartz countertop to brighten the darker grey island with the same white freshness as the walls,” says Johnston, adding that the Edison bulbs within the open glass pendants cast ambient light with a modern rustic twist.

Claire initially rejected installing an island sink, fearing it would attract clutter. “Am I ever glad that Sheryl convinced me otherwise,” she says. “It’s so handy.”

Johnston also persuaded Claire to turn a former walled-off living room into her new office by the front entrance with side pocket doors to the kitchen. “It’s so convenient,” Claire, a graphic designer, says. “I used to have my office on the second floor near the children’s bedrooms and would close all their doors before a client arrived or invite the client to my kitchen table instead.”

The foyer’s heated ceramic tiling makes it a good place to remove shoes or wait in boots. The same tiling is inserted around the great room’s French doors to protect the new oak flooring. “We even sent a sample of the stained flooring to B.C. to make sure it would go well with the fir trusses,” Johnston says. •