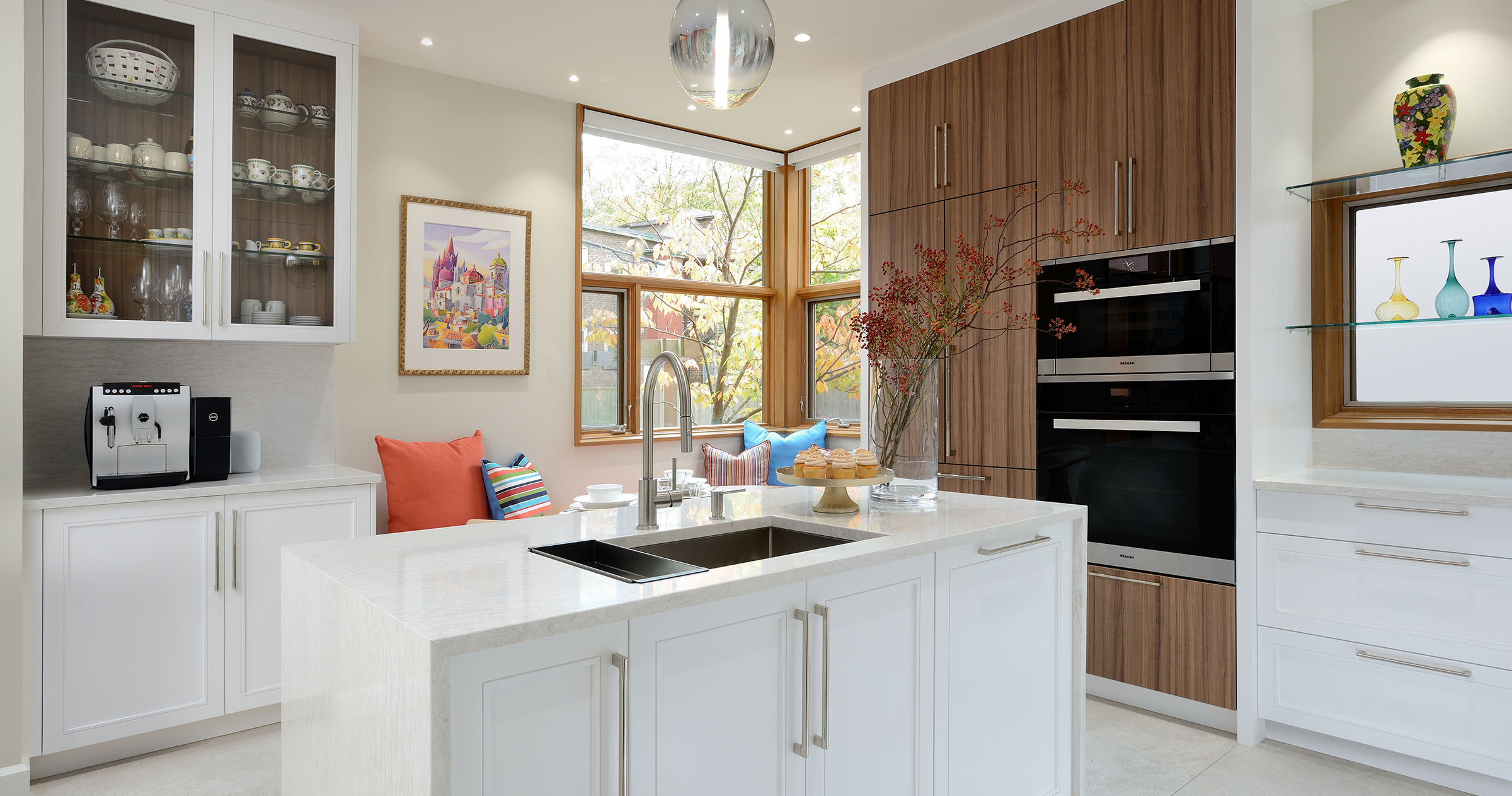 Going With the Flow

A formerly cramped Toronto kitchen gets a new, fluid layout and award-winning design

One of the joys of a custom-built home is that its owner can configure it to fit the everyday rhythm of life. And the owners of this three-storey detached home in The Beaches, designed by Toronto architect and academic Jeffery Stinson, have found this to be true — with one exception.

Back in 1999, a kitchen layout that was more cozy than open-concept seemed the way to go. “We still love the home, with its contemporary and asymmetrical design,” says the homeowner, who lives there with her husband. “But there was always a logjam by the back door when we had people over. There was no flow because there was nowhere for more than a few people to stand in the kitchen at once. As people wanted to enter the kitchen, there was a traffic jam getting in. Also, the space to the sink, stove and oven had no exit, so it was crowded when more than one person worked on meal preparation. We had to do a coordinated dance around each other to work.”

A revamp was in order, for which they turned to Viktoriya Dacosta, senior kitchen and bath designer at Yorkville Design Centre, which is an exclusive dealer of Downsview Kitchens.

To open up the 233-square-foot space, she first removed an awkward peninsula and partition wall. A pantry was moved to the far wall and expanded, extending floor-to-ceiling with special provision for a laundry chute.

Dacosta also was charged with creating a fresh, contemporary look that would respect the original architecture and the couple’s different priorities. “He’s an engineer who thinks of function and prefers clean, modern lines, and she is a watercolour artist who likes colour and homey touches,” says the designer.

Dacosta strove for balance in the technical and creative aspects of the new kitchen’s design. And the result of her efforts not only pleased the homeowners, but was awarded a first-place prize in the 2020 National Kitchen & Bath Association (NKBA) Ontario chapter’s design competition.

The designer found room for a centre island that houses a sink, dishwasher and cabinets. The walls are white as are the banks of simple Shaker-style cabinetry with discreet hardware. For a subtle contrast, the quartz countertops and backsplash are light beige with grey veining. Against that, she played a dramatic and modern touch of wood-look laminate millwork with strong vertical graining. “The homeowners very much wanted to preserve the original wood window frames,” explains Dacosta. “Any other real wood species would have competed too strongly. And this gives such interesting texture and mix of light and dark tones.”

Another original feature the homeowners couldn’t part with was the bench under the corner windows. It was ever a favourite cozy nook to curl up in, at any time of day. Dacosta added a dining table, at which the couple now take most of their meals. Atop it, she piled lots of colourful pillows. Underneath lies an oriental carpet to reflect the husband’s passion for collecting handwoven masterpieces from Afghanistan and Iran.

Beside it stands a coffee station. The state-of-the-art espresso machine is for him, a true coffee connoisseur. There is ample drawer space for paraphernalia and supplies. The glass-front cabinet above is all about her: it displays a teapot and dishware gleaned during trips in France and Italy to inspire her watercolour paintings.

The couple enjoy the personal touches as well as the new flow. Meal preparation is a breeze. And the kitchen that once fit only two people comfortably now works when they entertain a crowd. “We’ve held events for as many as 50 guests,” the homeowner says. “And the kitchen layout now makes the backyard almost an extension of our home, which is very new. It really is all about the flow, isn’t it?” •

Decisions, decisions. You’ve decided to renovate your kitchen. That’s the easy decision. Now comes the challenge as you face down...

Photography and Styling: Azen and Kevin Bongard Homeowner/designer Azen Bongard chose a light concrete board to surround the fireplace in...