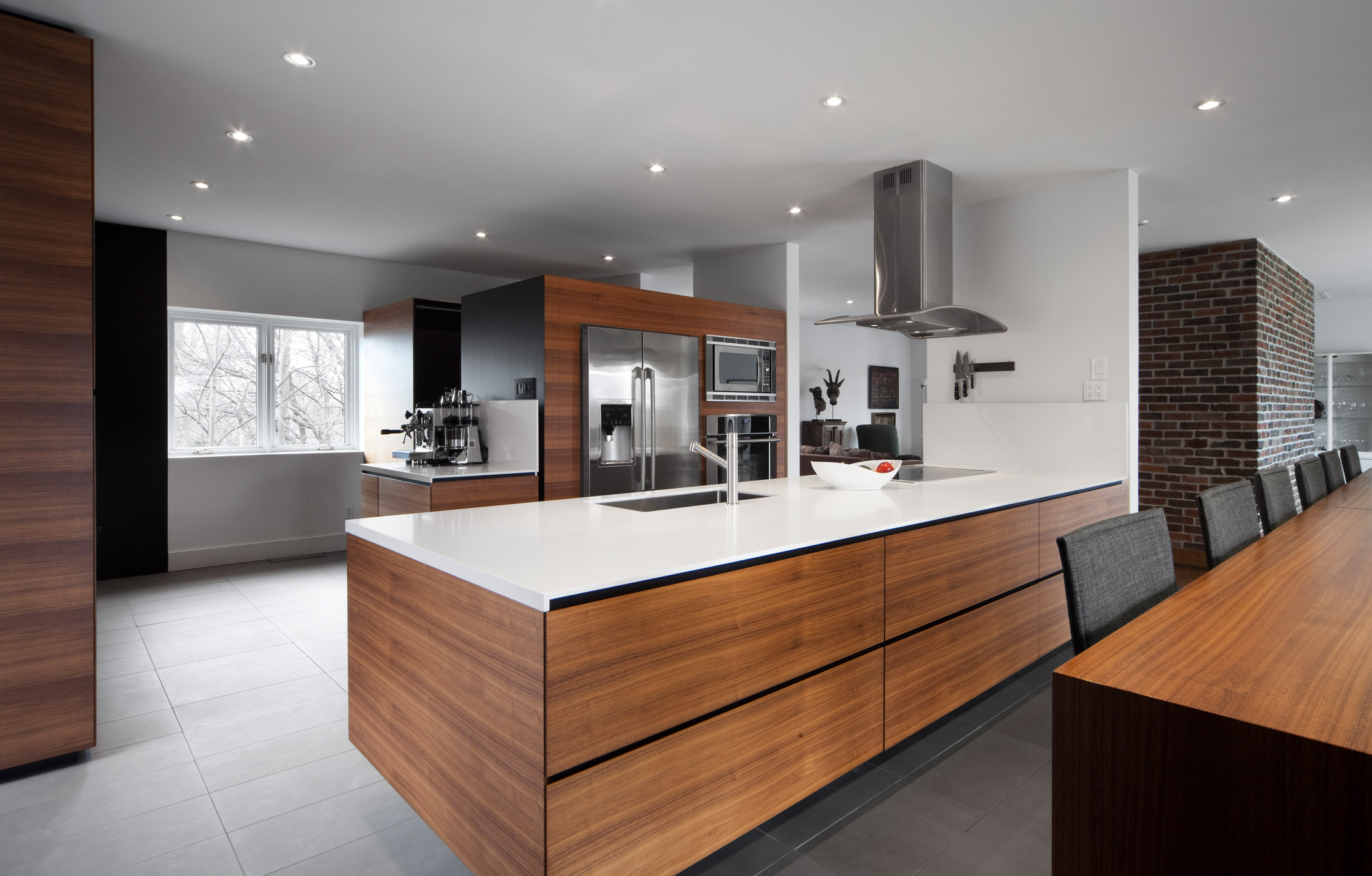 Josée Anne Bergeron’s kitchen was already the heart of her family’s Pointe-Claire home, but even she was surprised by how a kitchen redesign could change the feel of the entire house and make the room more functional and user-friendly. Everything has its place in the new contemporary-style kitchen that replaced the former old, country-style one. And now there’s room for more than one cook, thanks to the large island.

What’s more, as many as 14 can be seated for dinner around a 12-foot-long kitchen table.

“They told me they would be entertaining a lot,” explains Mario Painchaud, the Montreal designer behind the renovation, and owner of C3Studio design firm. “But they didn’t want to always have to eat in the dining room. The kitchen was so closed, though.”

There were tight squeezes here and there and limited counter space. Painchaud says he transformed the space into what the homeowners wanted by removing the walls separating the kitchen, living room and dining room, and then creating an open-plan design, with the kitchen as its hub.

The new kitchen is designed around what Painchaud calls “three volumes” – by which he means three oversized stand-alone cabinets, covered in walnut veneer and serving both a utilitarian and aesthetic function. The three cabinet units are situated in the middle of the kitchen and run parallel to one another, with space between them to allow the homeowners to circulate. One “volume” serves as the kitchen island and has a quartz countertop, sink, dishwasher, pot drawer, range and stainless-steel hood. The second contains a side-by-side fridge, two ovens and cabinets for food and dishes. The third houses the washer, dryer and laundry storage.

The kitchen-island cabinet appears to be floating because its floorboard kickplate was set 10 inches deep, instead of the usual three inches. And, taken together, “the three volumes” look like a series of modern sculptures.

After the redesign, Josée-Anne says, the kitchen quickly made her home a go-to place for family gatherings. “The largest group we have had was 85 for the engagement party we had for our nephew.”

Entertaining became much more fun, she says, as did everyday meals. She says her husband Jean-Marc Legentil was also pleased by the separate counter for his espresso coffee machine and the oversized range hood fan. “He cooks like a man,” she jokes. “There’s sometimes a little smoke.”

After enjoying their kitchen for four years, the couple recently said goodbye to the home. With all six of their children now out on their own, the five-bedroom, four-bathroom house was too large. But the kitchen ended up serving a purpose they had not anticipated when they undertook the redesign. “There was no doubt about it,” says Josée Anne. “The kitchen sold the house.” •