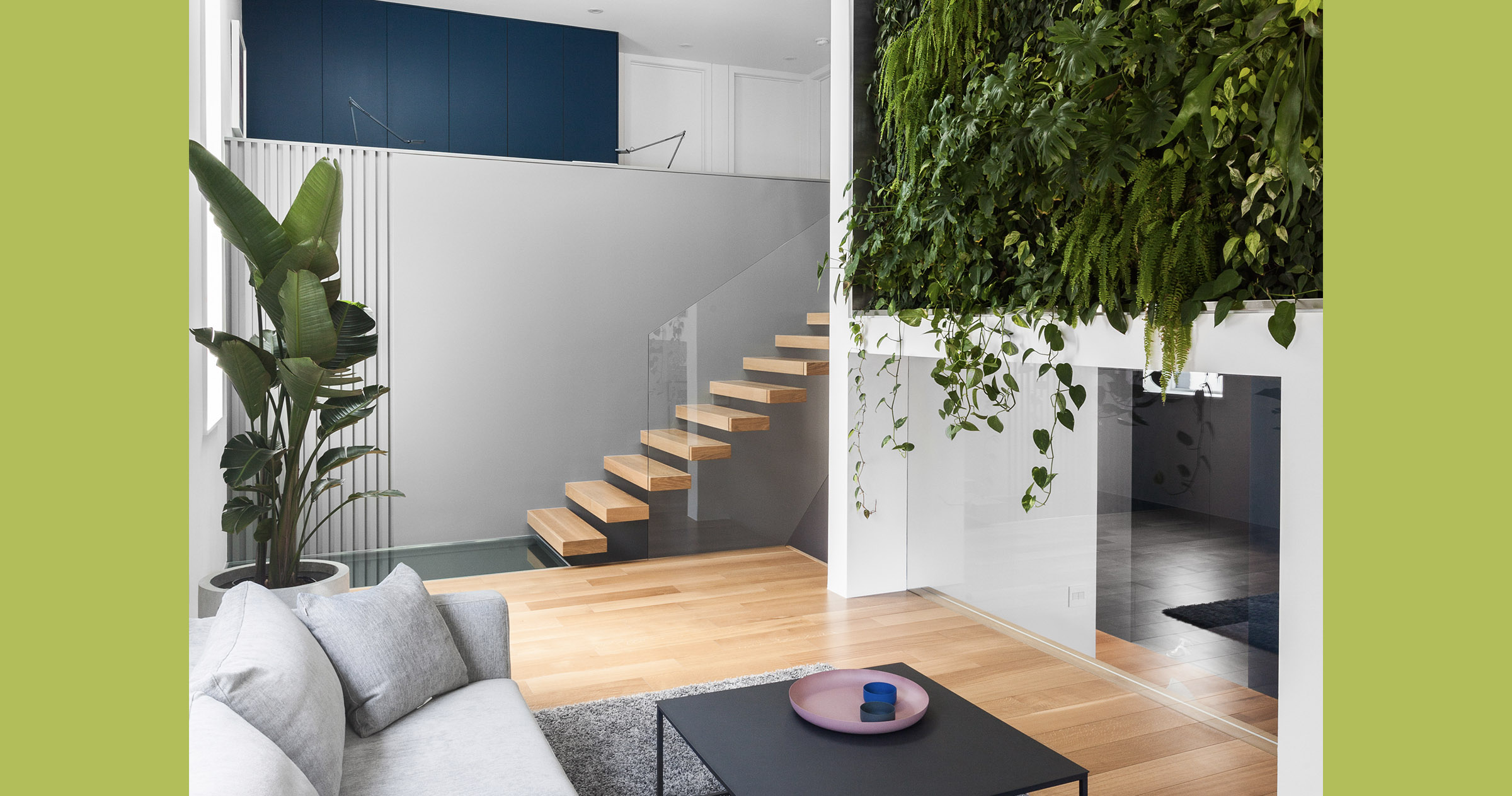 Easy To Be Green

This is a tale of transformation of a two-storey brick house in Outremont, where tradition and trend reside together. It is also the story of limits and light – how to eliminate one and incorporate the other.

Oh, and it’s also about a green wall – a living, lush and luxurious show-stopper that might just be the next big thing in modern residential spaces.

This story begins with a professional couple from South America with two children in search of their first house. “We went looking for a house to renovate completely and create a space we were comfortable with,” one of the owners, a doctor, explains.

They settled on a home built in the 1940s that had all the basic elements they were seeking: a south-facing backyard, the right interior space and lots of natural light. But what was more, all these essential elements could be improved upon. So they bought the house with the plan to do just that.

“For them, sunshine was important,” explains Stéphane Rasselet, the lead architect and owner of Nature Humaine, the Montreal architecture firm that designed the home’s transformation.

To increase the amount of natural light that fills the space, Rasselet installed a 26-foot-wide wall of windows on the back side of the house that opens to the backyard. The four-panelled floor-to-ceiling vitrine with two central panes that offers access to the garden, frames the main living area of the house – the kitchen, dining room and living room. He also installed a skylight above the living room and stairway. But it was not just any skylight. This roof window, which opens by remote control, measures 30 inches wide and eight feet long. “The idea was to bring natural light in, and bring natural light to the green wall,” Rasselet says.

Ah, the green wall. It’s the first feature that draws attention to those entering the house. It’s a living, breathing, and exotic conversation piece whose size only adds to its impressive qualities. “I come from a tropical country in South America,” the owner says. “I wanted the lush greenery of the tropics to compensate for the lack of green of the winter.”

But he admits that the wall was his wife’s idea.

“We admired many green walls like this, but they are in commercial settings, not residential buildings,” he says.

The wall, which is made of panels that are two metres by two metres square and covered with layers of felt, contain a clustered collection of 10 varieties of tropical plants. “It’s kind of like the key feature of the indoor environment,” the owner says. “It gives you a refreshing feeling, especially in the winter when everything is white outside. Sitting in front of this wall is energizing.”

Another notable feature of this house is that its design eliminated most of the full walls. In their stead are open rooms and spaces divided by partial barriers – such as the semi-transparent steel sliding panel between the living room and the den, which is situated on a slightly higher level, above the garage.

“We created transparency between spaces – like opening the space between the living room and the den. We eliminated the idea of a wall in that space,” Rasselet says. “All the rooms connect. There is a kind of fluidity to it.”

The office on the second floor is also connected to the main floor courtesy of a partial wall that allows a view of the green wall in the living room. “It opens up horizontally as well as vertically at the same time,” Rasselet continues. “All the spaces are sort of intricate.”

The effect creates a cohesive whole.

“During the summer months, my favourite part of the house is the kitchen and dining room,” the owner says. “That is because of the big opening to the backyard. You have a view of the whole garden. In the winter, it’s the family room with the green wall.”

It’s a place where every member of this family of voracious readers gravitates to when they curl up with a book, his wife adds. “This is our first house, and unless something exceptional happens, this will be our last house for a long, long time,” she says.

It would be tough to beat living with light and few limits. •