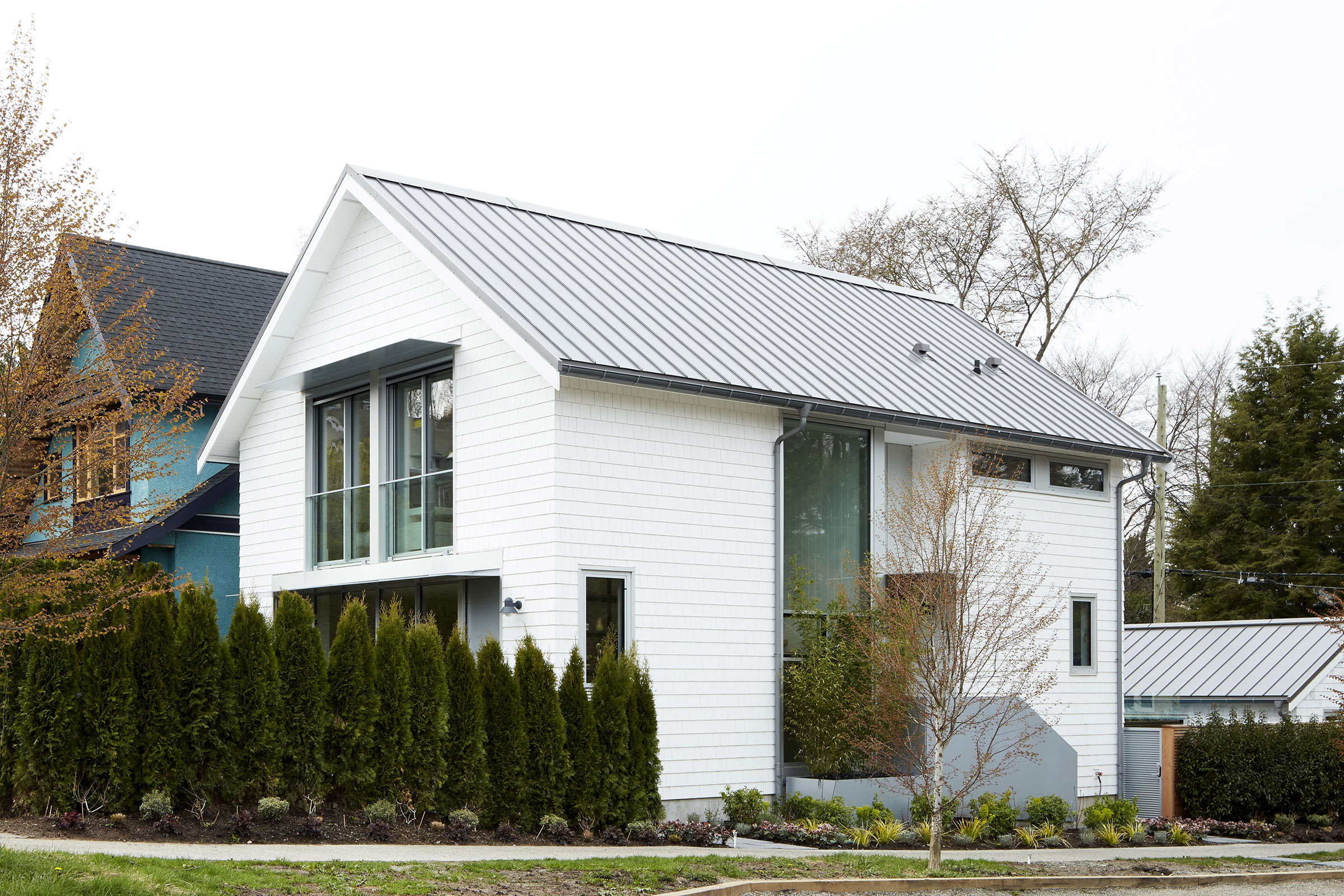 Downsizing For An Upscale Life

Sometimes, the best laid plans shift and morph into something even better.

Parents to six children – two still living at home and four transitioning in and out of the family home – designer Juli Hodgson and her husband opted to sell their 5,000-square-foot property in the Shaughnessy Heights neighbourhood of Vancouver and begin their next chapter. In the spring of 2015, the couple purchased what they thought would be a temporary home on a sloped corner lot in laid-back Kitsilano, steps from the water.

“Originally, I was going to renovate the house and move in while I looked for a more long-term situation, but there were some intrinsic qualities that made it a more interesting project,” says Juli, president of Hodgson Design Associates in Vancouver.

At first, the plan involved renovating the existing house, but after discovering old radiant heating, insufficient insulation, leaks and rot, Juli had it torn down so she could start afresh. The lack of trees on the small corner lot made the property feel larger, and presented no restrictions from the city. Juli would be free to use every usable inch of the 3,960-square-foot lot to design a family home that would add a modern twist to Kitsilano’s beach community.

“I had been designing mostly pure modern houses, and I had a hankering to do something more beachy with a modern look,” she says. “I’ve designed modern beach houses for other people and I really wanted one.”

Juli says that while building her previous home, she compromised on details that she really wanted in order to cut costs. This time around, she would get her dream finishings. “I realized that when I didn’t do exactly what I wanted to do, I ended up regretting it, so it just ballooned into this new project.”

Completed in 2018, the 2,560-square-foot home is clad in white cedar shingles and boasts vast expanses of windows, which proved challenging to include.

“I had to fight to get windows that size, because that doesn’t fit the context of the neighborhood, so the city planning department was really against it,” Juli recalls. “They want that typical house you draw in grade one with two windows and a roof. Yet I had overwhelming support from the neighbors; they loved the design, and eventually, the director of planning intervened and told the planning department to let me do it. It took over six months to get a building permit.”

Because of her early design training with Calgary’s Coco Cran, her stint learning the construction side of the business with Victoria builder Bill Patterson, and 28 years running her own successful design firm, Juli sees every project from many perspectives. Known for her clean, neutral yet dramatic design, she chose to reorient the home’s entrance. By putting the front door on the 120-foot side of the lot rather than where it was on the 33-foot side, the main floor opens up into one large space with no hallways.

Reconfiguring the entrance also enabled Juli to design a generous, airy kitchen equipped with all her must-haves: a Gaggenau oven, a steam oven, fridge and freezer drawers, a coffee station, and two dishwashers to accommodate the many large dinners she hosts. An oversized rectangular island crafted from French oak matches the Italian dining room table and all flooring throughout the home. “We flipped the kitchen from one side to the other three times before I finally decided it was going to go on the south side because on the north side, the grade is lower, so you have to actually walk downstairs to get into the backyard,” Juli explains. “But on the south side you’re right at grade, so even though that’s technically considered the front yard, I created a courtyard by planting a 10-foot hedge around, while having direct access out to the front to my barbecue and seating area.”

Sixteen-foot-high disappearing sliding glass doors on the front and back sides of the house allow abundant natural light and cross-ventilation into the kitchen and main living area while integrating the indoor and outdoor space seamlessly.

Juli chose durable white Corian for the kitchen cabinet door facades, and an expansive Calacatta Oro marble surround for the cooktop area. “I like it because it’s seam-matched, not book-matched,” she says. “With book-matched, you get those funky patterns where you cut it, whereas when you vein-match it, it has a continuous vein. It looks like it’s all been cut out of the same piece.”

An open wood staircase leads to the second floor, where soaring 20-foot vaulted ceilings dotted with skylights and one-by-six tongue-and-groove panelling evoke classic beach house style. “Because everything’s open, you can get heat gain on the second floor; the skylights open so that any warm air that gathers up there can escape. It’s basically like passive air conditioning,” Juli says. “You open the two big doors off the master bedroom and the skylights and your house feels like it’s air conditioned.”

With two bedrooms above the kitchen and the master bedroom overlooking the plunge pool out back, Juli’s house is the perfect size for her family’s needs today.

“Kitsilano is friendly and young, with lots of people with dogs. It’s a lot more vibrant, which I wanted, plus you can walk and ride your bike everywhere,” she says. “I’m happy we ended up staying here.” •