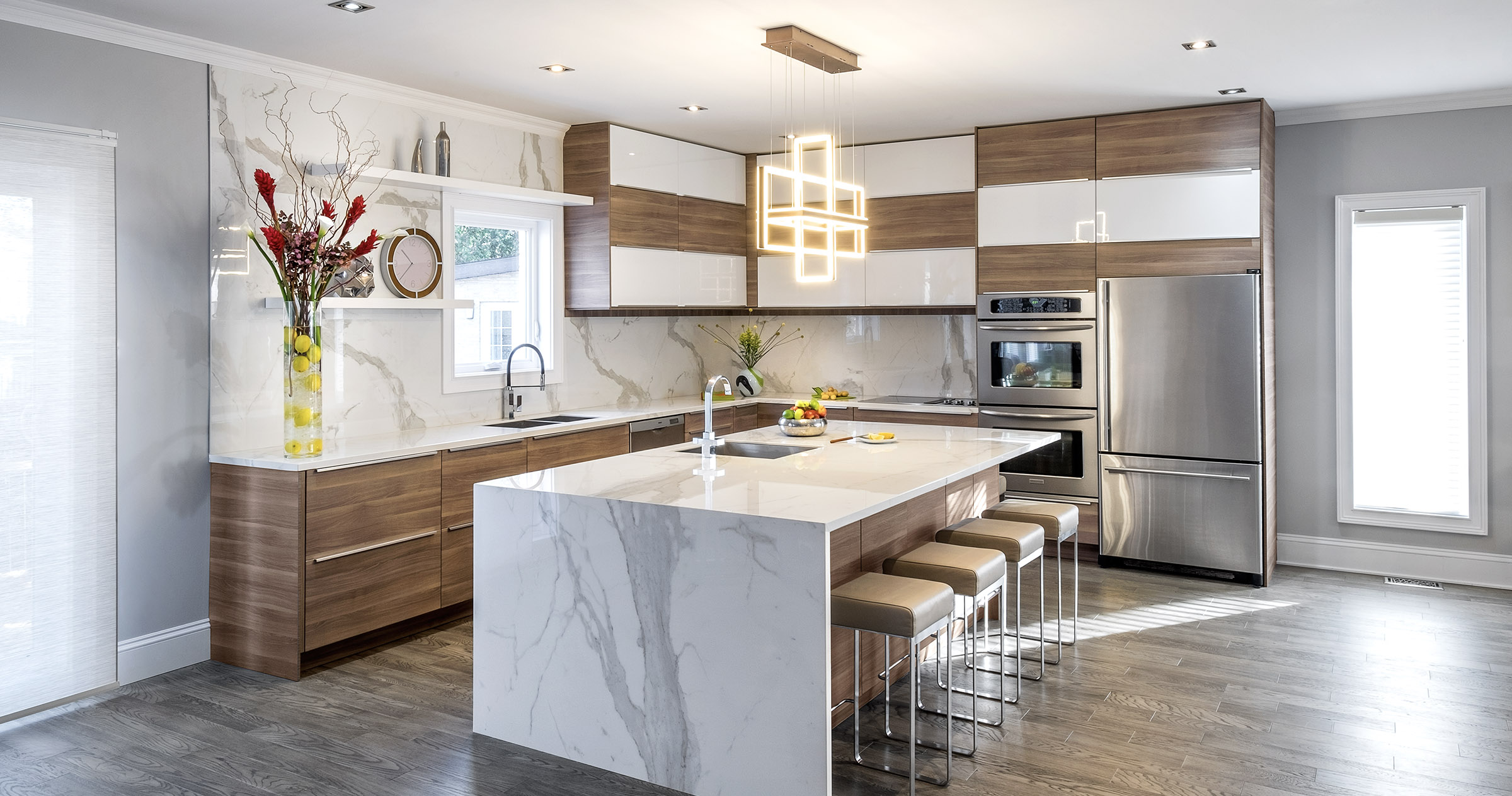 Marina Bibikova loves to play with light, textures and colours. She works as a design manager with her husband Dominic Parasuco, division director for the private label at Montreal-based fashion company Parasuco Jeans. So when it came time to renovate the couple’s Beaconsfield home into an open-concept space with a new contemporary kitchen as the hub, Marina wanted them to do it themselves.

The couple demolished the walls separating the original kitchen from the adjacent living and dining rooms, to create the new open-concept space. Electricians and plumbers were called in to do the new wiring, plumbing and forced air vents that had to be relocated. But once that work was done, Marina rolled up her sleeves to work on the design.

“I’m not typical,” Marina says, recalling the eight-month-long renovation project that opened up the 1,100-square-foot main floor of the two-storey house and linked the new contemporary kitchen to the other rooms. “I live for it. I can see it all in my head before I even get started. I work on home renovations the same way as I design garments. You start by conceiving an idea, and then you build around it.”

Although the house is relatively new – about 20 years old – the couple didn’t like the honey-coloured oak flooring and the fact that the kitchen was closed off, which was inconvenient for entertaining. Now, she says, when she is prepping for a meal or organizing the next course, she can chat easily with guests sitting at the dining room table or at the island. And there’s an easy flow from room to room. “I can see right from the kitchen to the front door now,” Marina says.

The couple had the cabinets – which are faced in oak and white laminate – manufactured in China and finished in Montreal. The counters and top of the island are clad in porcelain that resembles marble.

The new floors were a do-it-yourself labour of love. Marina and Dominic visited several major flooring companies, but couldn’t find the exact greyish-taupe colour Marina wanted. They kept looking though, and eventually found an upstart company off the Montreal island that was able to create the custom colour Marina had envisioned. The company taught the couple the various steps of the multi-layered staining process, and then provided all the products (six in all) so they could finish the oak cabinets to match the floor and the traditional dining room that was also to be refurbished. “It’s crazy, I know,” says Marina, reflecting on the floors that she and her husband finished in a 72-hour marathon.

But, she adds, she is very pleased with the outcome of the entire project. The end result is a one-of-a-kind designer kitchen.

Even the halogen-light fixtures hanging over the new kitchen island and the dining room table sport the same grey-taupe colour. They were custom-made from Marina’s sketches at a high-end lighting company based in Shanghai. Their metallic finish was developed to recall the kitchen’s colours.

Marina says she especially loves how there are various intensities of the same shade on the various woods. •

Street Art – A Message of Love