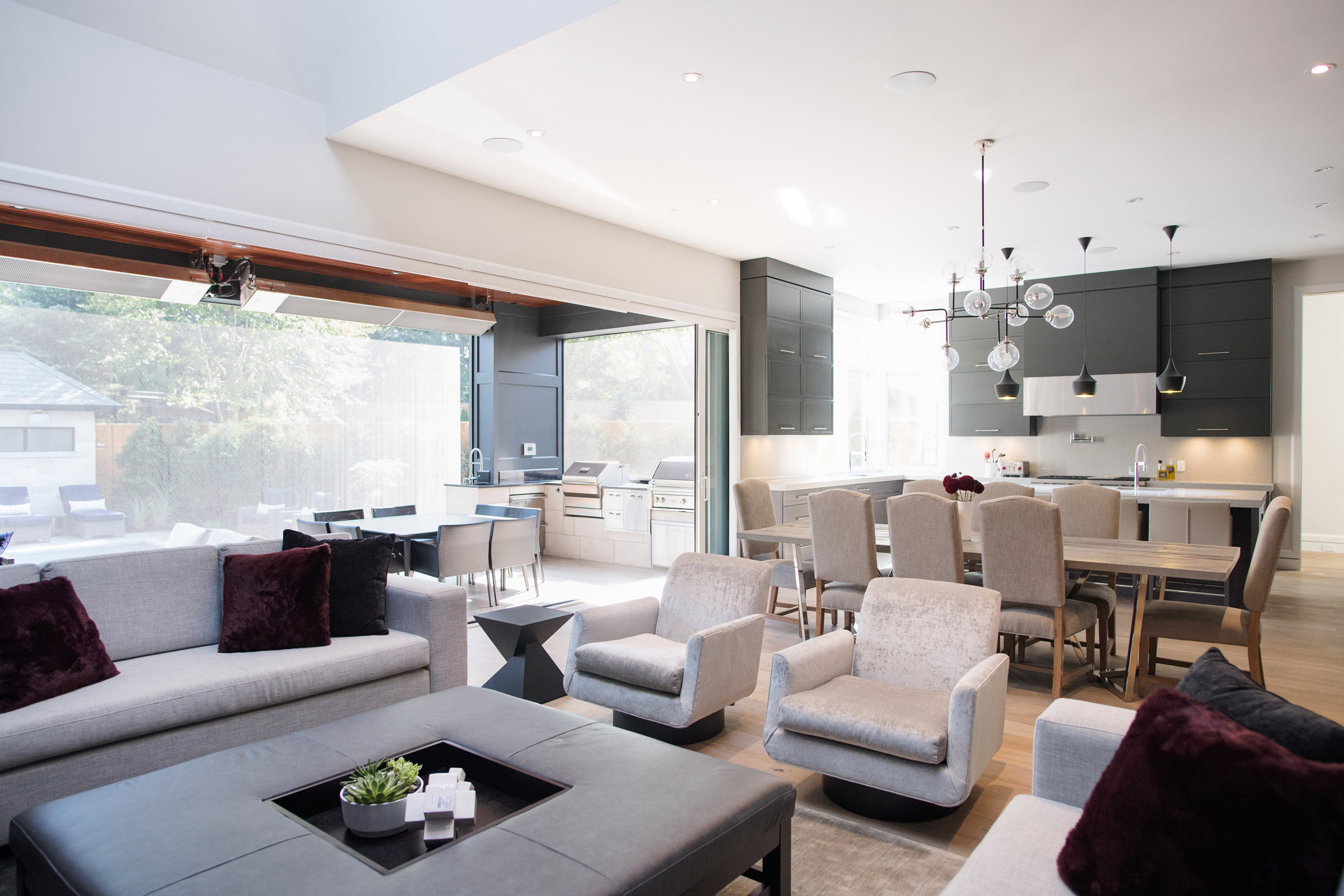 Designed and Built Just For Them

One morning, Marian and Michael Daoud woke up in their condo in the heart of downtown Toronto with a sudden, burning desire to have greenery and fresh air outside their door.

So the couple bought a property in Etobicoke – an area they had accidentally fallen in love with several years before when they got lost in the neighbourhood – and set about building their dream home on a challenging, pie-shaped lot.

Since the catalyst for the project was their wish to be able to enjoy the outdoors, one main objective was to create a fluid indoor/outdoor living space. The results of their endeavour are spectacular.

Pocket sliding doors off the kitchen and family room can be pushed aside to completely disappear, allowing the great room to flow seamlessly into the lush outdoor living room and kitchen and then into the garden and pool area beyond.

It took a lot of engineering to make that work, says Michael, who used his experience building houses for Edition Homes to help with the design. “Making that indoor/outdoor living come to life was a necessity to me,” he says. “We wanted it to be one organic living area.”

Carey Mudford and Brandon Fox of Coe Mudford Interior Design were responsible for overseeing the design, along with Michael.

Mudford says they worked hard to create a continuous, fluid space. The pre-finished European oak floors in a matte finish indoors were replicated outside in a tile from Stone Tile International Inc., so the floors appear to spill over into the elegant outdoor room, which also has splashes of dark wood panelling and a similar palette of colours that reflect the interior space.

While the indoor kitchen is Marian’s space, the outdoor kitchen, with both a grill and a pellet smoker for slow cooking, is Michael’s domain. With a sink, a fridge and storage, the kitchen is fully functional – and overhead heaters make the space usable at least nine months of the year.

A TV and wood-burning fireplace complete the space and make it much more than a mere patio. It is really an outdoor extension of the house, all the more satisfying to the Daouds because of the challenging constraints of the narrow space they were working with.

There is no question that this is a house with a major “cool” factor. From the heated driveway and walkways to the home automation system that controls absolutely everything – locks, security, cameras, blinds, drapes, temperature – the technology incorporated into the home allows the couple to live maintenance-free.

The soaring architecture and abundance of windows lend to the 8,000-square-foot home’s airy ambience.

The couple spared no expense, using high-end materials in the millwork, furniture, tiles, lighting and appliances – all of it elegantly showcased in a sleek and contemporary design that has breathtaking elements, yet never seems to veer into the realm of being over the top.

Part of the reason for that is the spare design of the interior, which Michael chalks up to his wife, whom he calls “the queen of anti-clutter.”

Mudford says the couple didn’t shy away from design elements that brought a lot of character to the home: brass inlays in the foyer’s floors; dark cabinets and finishes that create drama and warmth; interesting textured wallpapers such as the velvet paper over the main staircase. “They wanted a very clean look but not cold and clinical,” says Mudford.

For Michael, the pièce de résistance is his basement retreat. Marian wanted it to resemble a hotel lobby, but Michael wanted man-cave elements, such as a five-screen TV wall to watch sports. They succeeded in achieving both goals. The bar accented with zebrawood and brass bar stools, the club chairs in front of the fireplace, and the sprawling custom-made sofa bring the chic style Marion wanted, while Michael has a built-in humidor, ample space to display his music memorabilia (including a signed B.B. King guitar and a signed Michael Jackson album cover), a 2,200-bottle wine cellar and a superhero mural in the gym.

“We live really busy lives but we enjoy our home when we’re in it,” says Michael. “It makes life easy.” •

Benjamin Moore’s Color of the Year for 2021 – Aegean Teal

If months of lockdown have you yearning to be in the great outdoors—forest, meadow, sea—you may think that the colour...

Rooms With a View

Many Inspirations and Styles