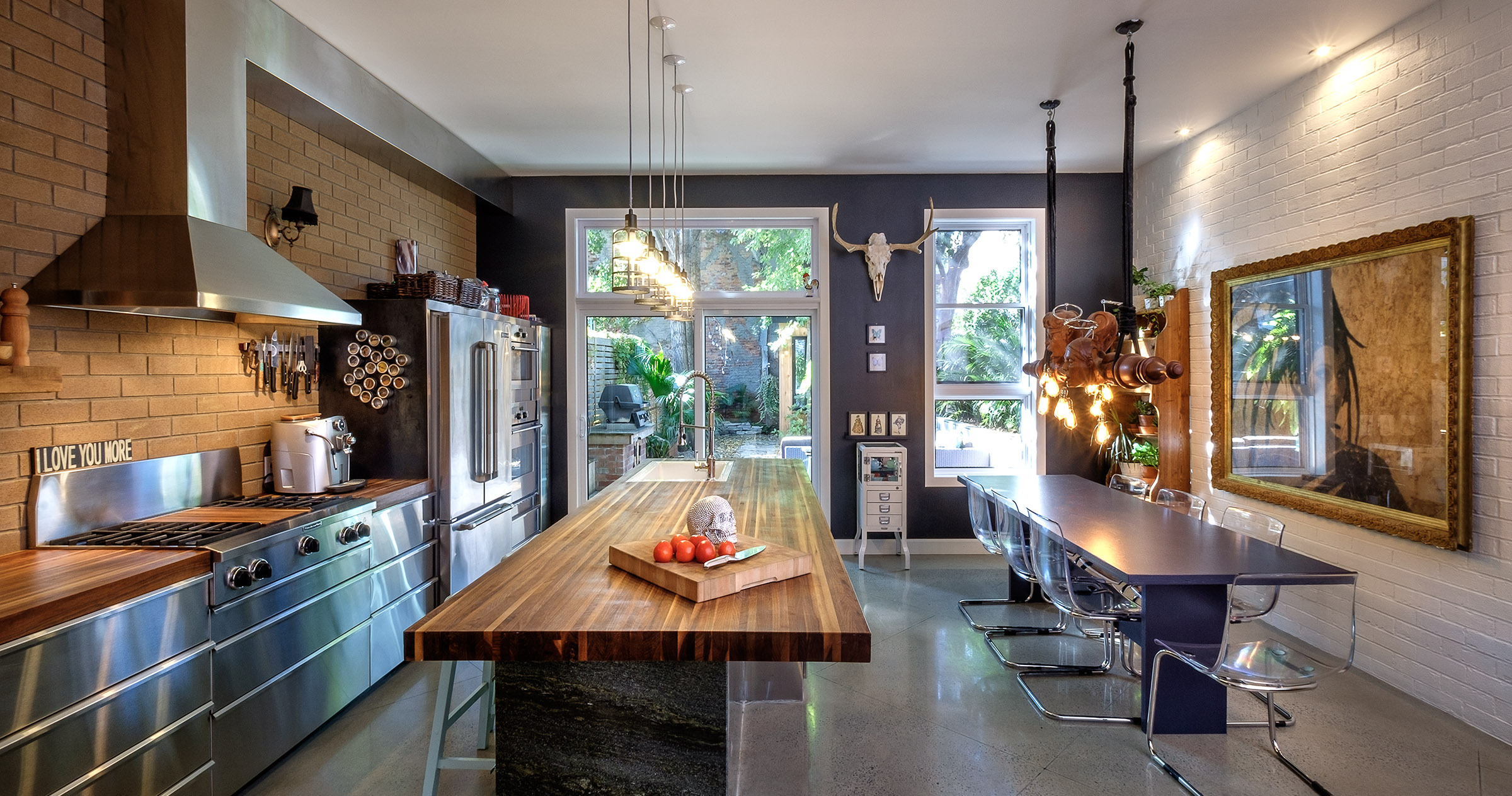 A couple custom-build their St. Henri home to give both their mothers an in-law suites

A delightful whimsy defines the decor in the home owned by photographer Steph Polic and contractor Martin Leblanc in St. Henri. “I love incorporating elements of surprise, especially if they’re done by local artists,” Steph says.

The couple’s property, near the Atwater Market, has been unique from the get-go. “We bought a building that had been abandoned for years and had a tree growing out of it,” Steph says. “We committed to restoring it but the heritage board agreed there really wasn’t anything of historical value to salvage, so we demolished it and started again from scratch.”

Working with an architect, the couple devised a plan to include a condo unit for each of their mothers within one-half of the structure’s first and second floors, while they would occupy the other half along with an entire third-storey loft.

Martin, who owns Stax Construction, took on the project, which made it easier for the couple to achieve their wish list. “High ceilings were a must,” Steph recalls. “I’m five-foot-10 so I wanted lots of space to be able to think.”

When Steph’s mom later decided she wanted to live on the top floor because of its stunning views and outdoor space, Martin installed a kitchen and bathroom for her.

Natural light abounds on the top level where the sunken living room features a 25-by-seven-foot window expanse as its backdrop. “We could really open up the loft space without any concerns about privacy,” Steph says. “And the views of downtown Montreal, the Lachine canal, and a bit of Westmount are spectacular.”

Back on the ground floor, the original concrete floor was polished in the main unit for an industrial chic that is kept warm with radiant floor heating. The couple also installed an additional layer of brick on each side of their unit for rustic appeal and additional soundproofing.

The lighting over the dining room table does not escape notice. The owners gave artist Bevan Ramsay, a Montreal native, a free hand to come up with something unique for their home within their budget. The result was Angels Puking Light, which Ramsay took 10 months to carve from a single piece of mahogany based on the photos of several of his New York friends.

“Martin had to reinforce the ceiling before it was installed,” Steph says. “When Bevan put it in place, we were blown away. We love it!”

A closer inspection of two nearby paintings reveals part of the unconventional Golden Moles series by Dave Arnold. He’s better known to some Montrealers as Mr. Sign for the vintage look he’s given to various restaurant logos, such as Joe Beef and Nora Gray. “I love that each painting features a mole,” Steph says.

She features her own untitled work above the sofa – a snap of her assistant on a recent photo shoot.

Artistry figures in other ways, too, including the kitchen island’s countertop. “A woodworker spent two weeks matching and gluing thin strips of American walnut to achieve that wonderful look for us,” Steph says.

Her penchant for bargain shopping online as well as at yard, estate and liquidation sales has led to other interesting finds, including a large nautical lantern, a taxidermied moose head and a bejewelled fake skeleton head.

If Steph doesn’t find what she wants, she or Martin makes it. She created the lighting above the island by installing mesh around fixtures intended to be outdoor sconces. Martin sawed and hammered the dining table shortly before friends arrived for brunch.

“I wanted a colourful tub to go with the glossy black ceiling I planned for the bathroom next to the master bedroom,” Steph recalls. “So Martin actually took the tub in his truck to the auto body shop around the corner from us and had it painted a BMW copper.”

The building is constructed to stand the test of time, according realtor Sylvie Ménard of Royal Lepage Humania, who is listing the property for sale.  Steph and Martin are ready to take on another renovation challenge in the same neighbourhood. “People often associate living in Montreal’s older districts with small, dark houses but these homeowners have wonderfully transformed a limited area into a bright and open space,” Ménard says. “And the rooftop deck is an urban oasis.” •