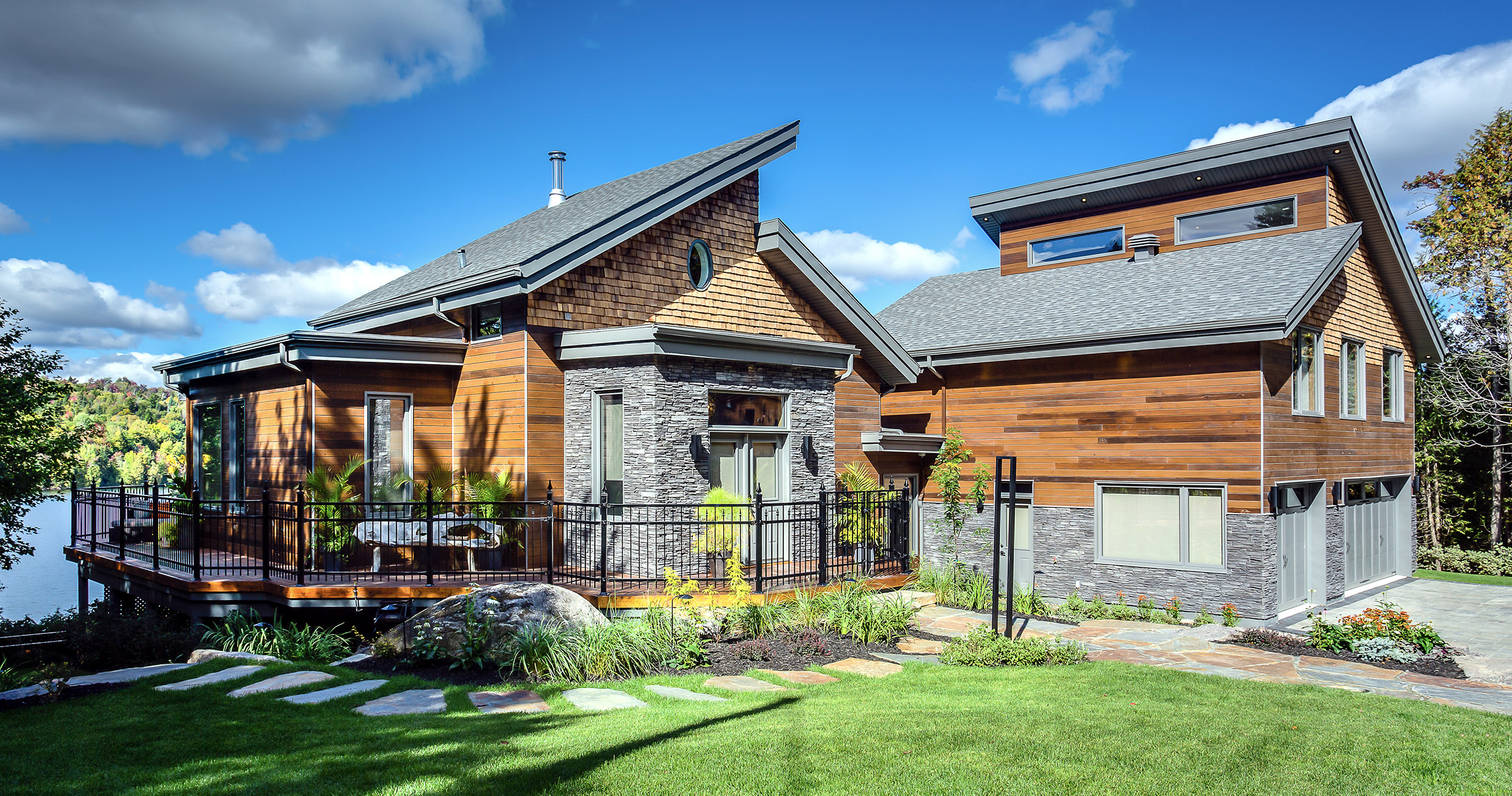 A Lot More Than Planned

The owner of this cottage describes herself as passionate about renovating. She also uses that characterization to explain how an initial plan to build a garage beside the cottage she and her husband own in the Laurentians turned into a renovation that has transformed their home into a serene lakefront oasis, which is perfect for entertaining.

“The garage project took on amplitude,” the homeowner says, explaining that the turning point came when the couple decided to abandon the initial notion of simply building a double garage beside the cottage and instead opted to expand the structure by including a second-storey loft, and attaching it to the cottage. That decision triggered a series of further modifications that resulted in a complete transformation of the home – both the interior and exterior.

“This is now a magical place,” the homeowner says, referring to the cottage they have owned for 15 years.

She says that once she and her husband dropped what she labelled “the minimum option” of the double garage, they then had to choose between two more elaborate options.

Option two called for a three-car garage with a second-storey loft connected to the house; it was a plan that included modifying the kitchen, where the access to the new structure would be situated.

The third option, which she called “an extraordinary design,” completely transformed the whole cottage. It included a larger three-car garage with a second-storey loft attached to the cottage.

But to prevent the new structure from dwarfing the main living quarters, two areas of the cottage would have to be extended to add space with higher ceilings and bigger windows. This meant refinishing the exterior and redesigning the interior.

They went with the third option. “It was the most costly option,” the homeowner says, but what a difference it makes. “Now, we sit down and we see the lake everywhere – in the loft, in the living room, the dining area.” And the couple has space to accommodate weekend guests, including their teenage son’s friends, who can enjoy private bedrooms with a luxurious bathroom, a modern kitchen and living room in the loft above the garage.

Designer and project manager Jean-François Croussette of Croussette Concept Design, who oversaw the transformation, says that one of the challenges was to ensure the garage and loft structure – now a two-storey building with a 24-by-36-foot footprint – would not overpower the main cottage, which measured about 24 by 24 feet. That meant changing the exterior of the cottage by giving the two extensions – one in the front and one on the side – a more prominent profile, and enhancing the landscaping, especially at the main entrance. To do this, Croussette contacted the town and negotiated to buy a small section of the street that ran to the edge of the property.

“We had to balance the two buildings,” he says. Both the kitchen and living room were expanded.

But the key was that the additions did not merely extend the living space of the cottage; they it heightened it, too, creating a whole new relationship between the building and its location.

Adding the height accommodated bigger windows. “I wanted to see the sky, the mountain and the lake,” says Croussette, who worked with architect Mélodie Caouette and general contractor Louis Ricard, both of Espaces Boréal.

The designer says he also wanted to showcase the lakefront setting in almost every room – the living room, dining area and mezzanine.

The result is stunning. “This is the most pleasant place we have ever had,” the homeowner says. “Our breath is taken away. We could not admire our lake any more.”

One of her favourite features is an Extenzo ceiling in the living room. This is vinyl sheeting that covers the original part of the living room ceiling, where the height of the room could not be raised because it is directly below the second-storey master bedroom. The outer limit of the room – space that was added – has a higher ceiling, allowing for large windows. The combination creates a spectacular effect. It allows the view of the lake, as seen through the large windows, to be reflected on the lower ceiling.

“We see the lake in front of us and above us – there is a reflection. It’s unbelievable,” the owner says. “This space is magic.”

The family has never enjoyed their cottage so much. “When we leave on Sunday, we say thank you for the weekend,” the homeowner says. “Our secondary residence brings us so much serenity and calm.” •

From Cramped to Contemporary