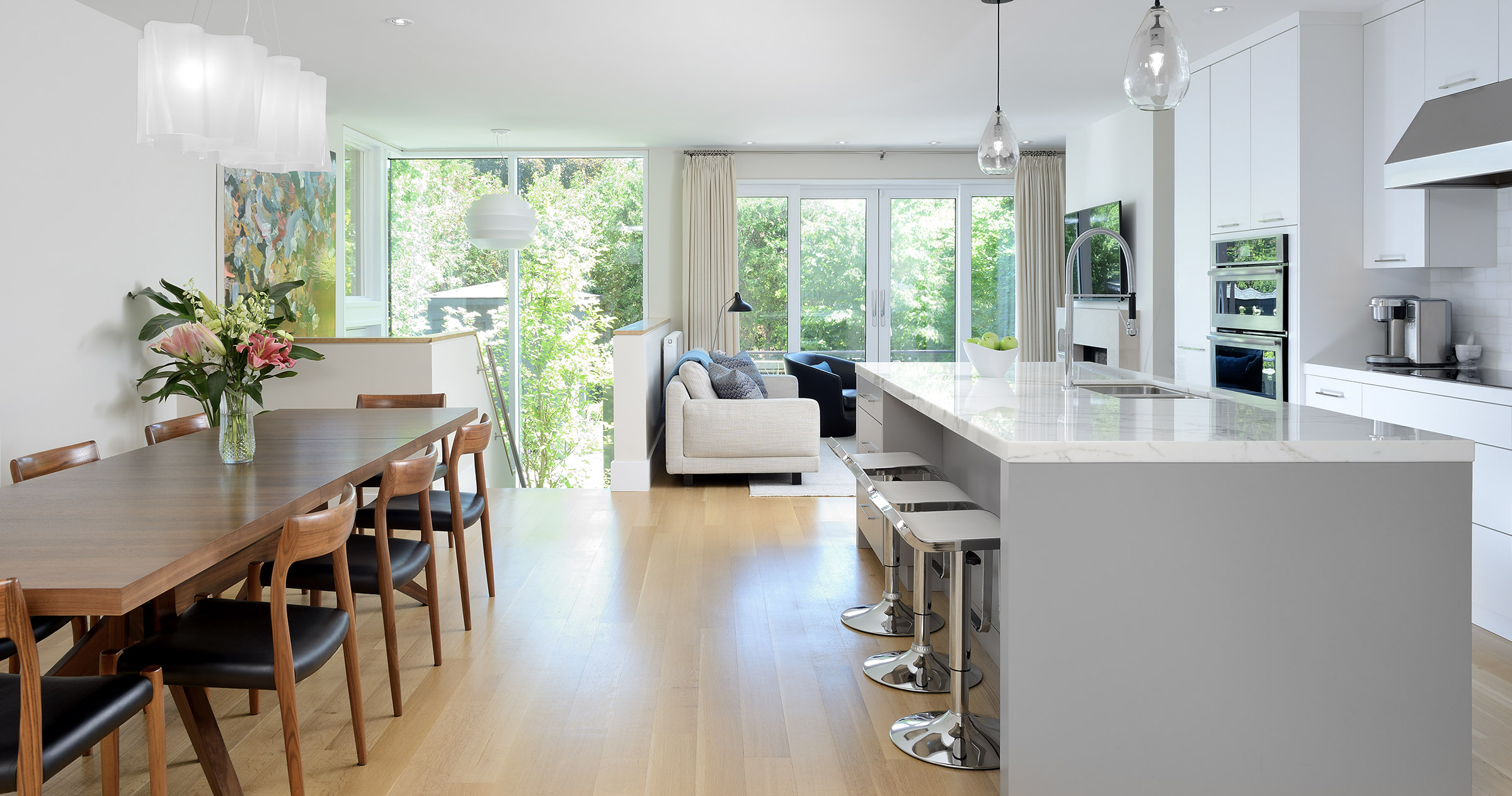 From Cramped to Contemporary

Tucked away on a nice street in the Moore Park area of Toronto, this circa 1915 house was dated and dysfunctional when interior designer Kate Zeidler first saw it. It lacked light and was inconveniently partitioned into a warren of rooms for the family of five living there.

Zeidler, principal at Kate Zeidler Interior Design, felt some trepidation about transforming it into the open, modern haven the homeowners envisioned – until the couple pulled out a gorgeous silk rug they had purchased abroad that they wanted to use in the redesign.

“They have beautiful taste,” Zeidler recalls thinking. “They liked beautiful, simple, elegant, high design.” And, suddenly, the project took on the promise of a true transformation, and Zeidler became excited about getting on board with contractor Dave Evans, a partner at project and construction-management firm Cliff & Evans Ltd. Along with architect Christopher Walker and landscape architects John Lloyd and Associates, the team began by listening to the couple’s requirements.

“The house was starting to fall apart at the time. Plaster was cracking, cupboards were falling off. But we liked the house and wanted to stay,” says the homeowner. “I wanted to open it up and clean-line it.”

Her three children, young when they first moved in – now 22, 19 and 16 – required more space. Above all, she wanted it to be open-concept to allow the family to have gathering places that promoted family time.

To achieve those goals, the house was gutted down to the studs, and the team installed nine inset steel beams, hidden in ceilings and floors, according to Evans.

The renovation added 1,000 square feet of space, bringing the square footage to 4,150. The basement was also upgraded to make the low ceilings 10 feet high, transforming it into a functional space. “We underpinned the foundation and dug down deeper,” says Evans. “Using every inch of the property is a big deal with Toronto home prices being what they are.”

Zeidler agrees that space management was one of the challenges of the project. “It was a fairly narrow house and they wanted a living room, den and kitchen with a large island on the main level. We had to measure it out so every inch was used properly,” she says. “When you have limited space, you have to be very precise.”

They put a walnut table next to the kitchen that is large enough for both daily needs and entertaining.

The homeowners’ indulgence in the contemporary white kitchen, with custom-made cabinetry, was putting marble on the pale grey island, painted in Benjamin Moore’s “Escarpment.” Zeidler loves the way the grey veins of the marble pick up on the colour and make the island a focal point of the room.

When they gutted the house, the one thing that was supposed to remain was the staircase. But as the project proceeded and the modernist look of the house began to take shape, the homeowners realized the old staircase just didn’t fit anymore. It was ripped out and moved, along with the front door, which was originally at the side of the house, to make better use of the space and allow for the open concept.

There were other challenges in creating a contemporary look. All of the windows and doors are frameless. Without moldings to encase them, a small quarter-inch reveal, or indentation, was used to define them.

The one-and-a-half-storey-high glassed-in foyer at the rear of the house, leading to the garden, was meant to bring the outdoors inside. However, Evans says, that meant using special windows imported from Denmark, to create the glass joints at the corners that the architect and owners wanted.

The result is a fabulous, airy space that brightens the home immeasurably. Nothing was left to chance to achieve the cohesive look, Zeidler says. Some interior trim and doors were done to match the European white oak engineered floors, which have a commercial grade finish for durability. Only the dark mahogany front door was designed to stand out from the rest.

The floors provide warmth, and Zeidler stuck to a subtle colour scheme, using variations of off-white rather than white to keep the homey ambience. “The fabrics and patterns also warm it up and provide interest,” she says.

Some of the upgrades cannot be seen. For example, says Evans, there was virtually no insulation in the 100-year-old home. Sound panels were used in the basement’s home theatre to provide sound absorption and reduce the noise upstairs.

The homeowner says she loves the openness of the renovated space. “It really brings the family together,” she says.

The clean simplicity of the design is due to the genius of the team behind the project.

It’s exactly the result the homeowner desired: “It went from dark and dysfunctional and segregated,” she says, “to open and clean and bright.” •

Something To Crow About