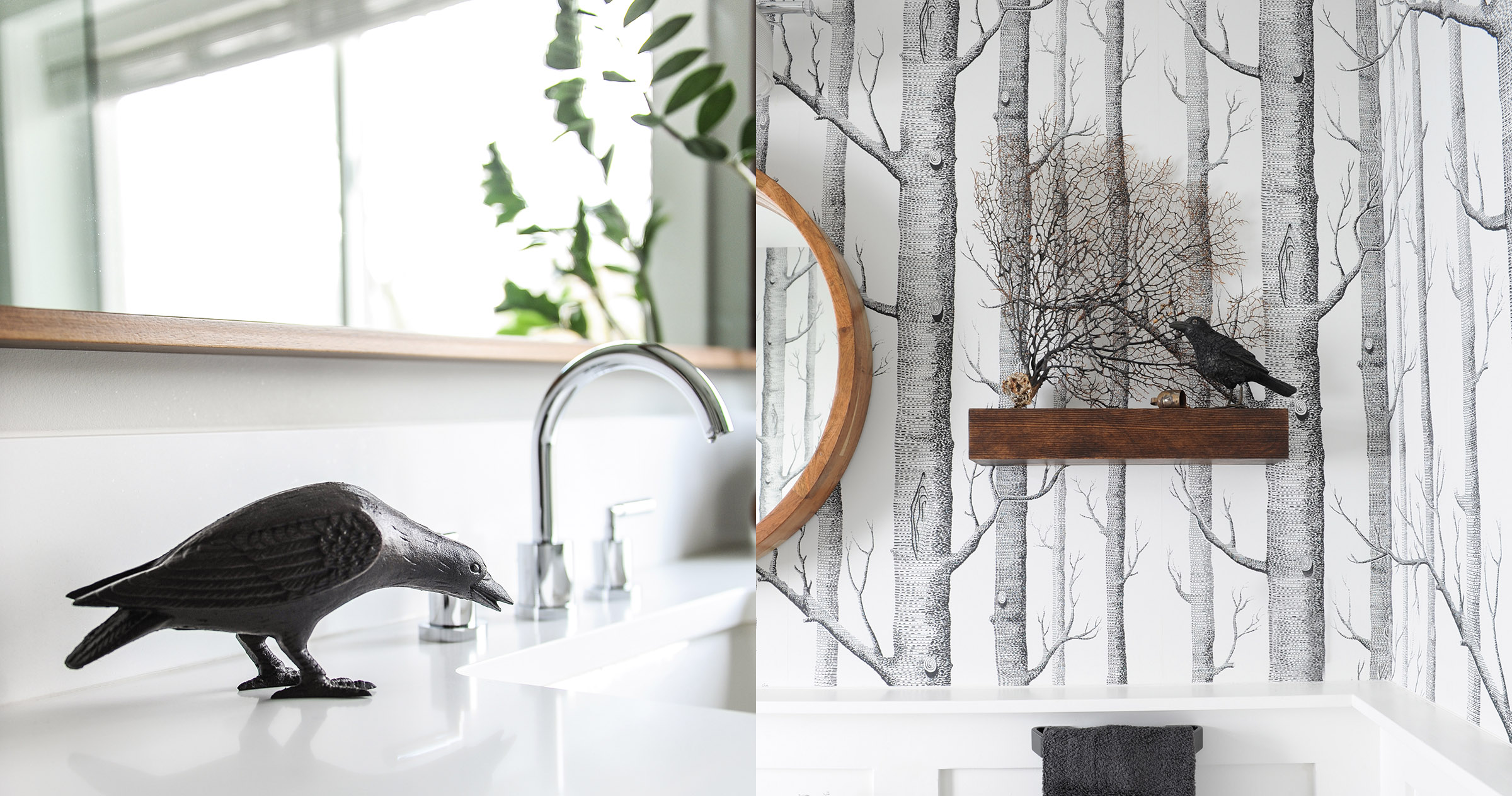 Something To Crow About

About three-quarters of a century ago, this East Vancouver house was one of many built for veterans returning from the Second World War. The interior had been remodelled since then, but Christina and Nick, the current owners, were not happy with the bathroom on the main floor and the one on the second floor.

“The main-floor bathroom had a bathtub and shower,” says Christina. Upstairs, where the bedrooms are, “there was no shower. We would walk downstairs to shower.” Furthermore, the shower-less upstairs bathroom had two entries, one from the hallway and one, at an inconvenient angle, from the master bedroom. The decor of both rooms was bland.

The upstairs bathroom with its two doors was inconvenient, Christina says: “The door from the master bedroom took up needed wall space, and the room was like the one downstairs: dull, boring, with uninspired cabinets from a big-box store.”

Christina and Nick had a few criteria for upstairs. They wanted a big shower with a bench so they could sit and bask in the steam. They didn’t need a double sink, but the vanity had to have plenty of drawers. Downstairs simply had to become more attractive.

In terms of decor, they wanted a hint of the 1940s style without it being too clichéd. “It had to suit the vibe in the rest of the house, which is more natural,” Christina says. “We really like the outdoors.” She in particular likes to garden “for hours and hours.” She also loves feeding and observing the crows in the area; she reckons she’s now fed five generations of crows.

This former veterans’ house is the last of its kind on the street, and Christina and Nick wanted to preserve the house much as it had been built. Thus, the size and shape of each bathroom could not be changed.

Interior designer Tanya McLean, owner of mango design co., relished the challenge. “Both spaces were out-dated and uninspired, which did not suit the warm, comforting aesthetic in our client’s home,” she says. With the work of assistant designer Nichole Skladan and general contractor Blake Williams of Hillview Renovations, the two rooms were designed, completely gutted and rebuilt in about three months.

“We rarely have the ability to work so quickly and to find a general contractor available to do so as well,” McLean says. “This was lucky!”

One reason that mango design co. got the job, Christina says, is that “I liked Tanya’s philosophy of using natural products and environmentally appropriate products.” She says that “when Tanya showed me the wallpaper I immediately knew that was the wallpaper that needed to be in there. We have a lot of trees on our property and a very lush garden, so the tree wallpaper brought the outside in.”

Functionality was the main challenge for McLean and her team. “For the upper-floor bathroom, we spent quite some time working with the layout to determine the best use of a tricky space,” she says. “The existing room had angles, two doorways, a window and an oddly placed toilet which couldn’t be moved without incurring additional expense. In the end, we proved that closing off the access door to the master bedroom would help greatly, as we could create a large shower along the wall and move the vanity near the window.”

The decor in both rooms now has a strong black-and-white emphasis and plenty of warm wood touches. The layouts make more sense, and showering is easy: “We don’t have to go up and down stairs anymore,” Christina says happily.

A year or more later, I don’t think I’d do anything different,” she says. “There’s not one thing I would change. That’s interesting because I’m a person who likes to change things all the time, [but] in those two bathrooms I don’t ever think that.” •