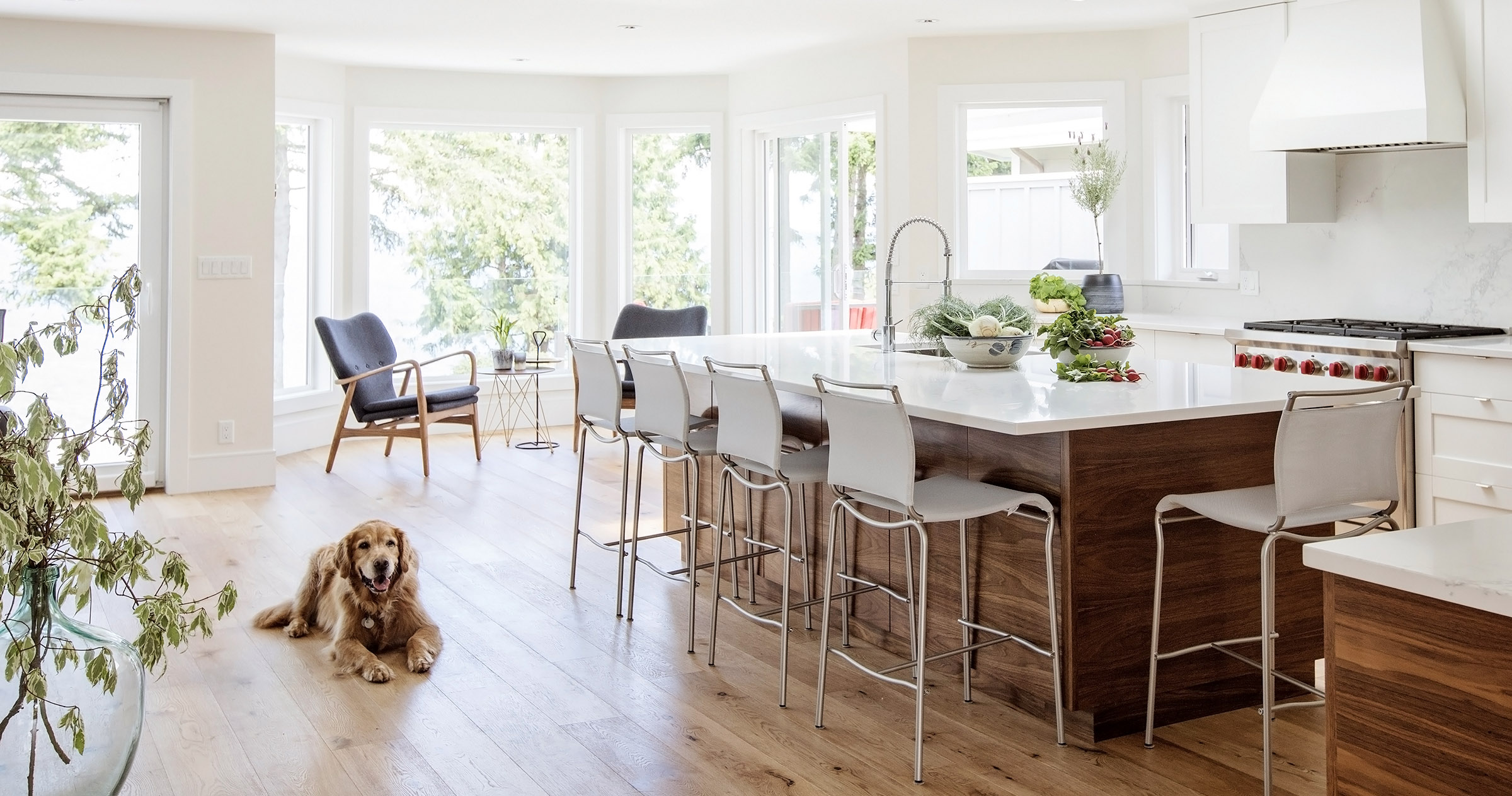 A Beautiful Place In The Neighbourhood

For years, a Nanaimo couple strolled around their neighbourhood admiring the waterfront properties not far from their own family home. Then, once their three boys had grown up and moved out, one of those houses went on the market and they couldn’t resist.

Its views out over the Strait of Georgia are stunning, says Rachelle Gervais, principal designer of RG Design Inc., who handled the home’s remodel. “Your eye goes straight out to the water. You don’t want to compete with that.”

Built in the 1980s, the four-bedroom, three-bathroom home had been meticulously maintained by its previous owners as far as its structure was concerned, but they had never updated the original decor. The new owners found the space dark and closed off; they wanted to make it light and bright. Most important, they wanted to be able to see the water from everywhere on the main floor – not just from one side of the house.

Before starting this project, they had remodelled a bathroom on their own and briefly considered managing the main-floor renovation themselves. They planned to put in larger windows and glass doors to let in the light, and knock down a few interior walls to open the space and create those sightlines to the sea.

That’s when they called in Gervais who collaborated on the project with Westmark Construction Ltd. “She (the homeowner) was perplexed. She was losing all this storage space and wanted input,” the designer says.

Gervais helped reconfigure the rooms, adding the original dining room on to the kitchen, and carving out new dining and living areas on each side. The design is flexible, she says, and the living and dining spaces could be switched if the homeowners ever decide they want to change things around.

“Then the space just lent itself to having two islands in the kitchen,” Gervais says, islands that would make up for some of that disappearing wall storage.

“On the BC coast, you get grey days. I knew I wanted it light and white,” says the homeowner. “The view is what gives us all the colour.” In addition to the white upper cabinets, the countertops and backsplash are white Caesarstone, with light-grey veining.

To add warmth and keep the kitchen from being too white, Gervais chose black walnut for the island cabinets. “It’s the cabinet maker who decided to bookmatch them,” the homeowner says, so that the adjoining wood panels mirror each other. “We really like it.”

The children might be gone, but there are other family members who influenced some of the design choices – the couple’s golden retrievers, Sam and Ruby. “Our other house had dark floors and they showed all the hair,” the homeowner says. The new floors are seven-inch-wide-plank white oak, with a wire-brushed finish. “It has a lot of black knots and I like that.” Her other reason for choosing it was hoping it would hide any scratches from all the paw traffic. “It’s all about camouflaging.” So far, she says, it’s holding up very well.

In both the master bathroom and hall bathroom, Gervais used the same walnut cabinetry, opting for a double cantilevered vanity in the master and a smaller one in the hall bath. She wanted continuity and the open, contemporary feel that had been established in the rest of the house.

The homeowner found a pedestal-style freestanding bath that she loved from a local supplier of reclaimed building materials; it was installed in the master bathroom. “In our old house, the kids were always throwing the dog in the tub,” she says. “I said, ‘No dog goes in this bathtub.’ ”

Because the tub is a traditional element in the room, Gervais says, she chose more contemporary-style fixtures to add contrast.

The homeowner says the renovation would never have come together this way had she tried to manage the project herself. “The scope was much larger than they originally thought,” Gervais says, and trying to do it while working full-time would have been very challenging. “TV shows make it all look so easy, and it all comes together in 30 or 60 minutes. It’s not like real life.” •