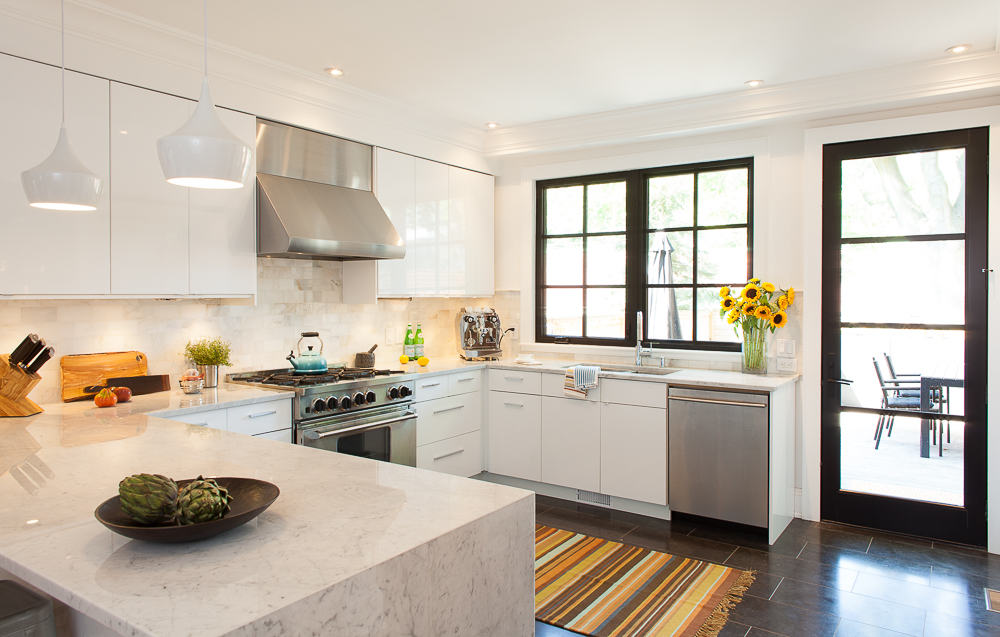 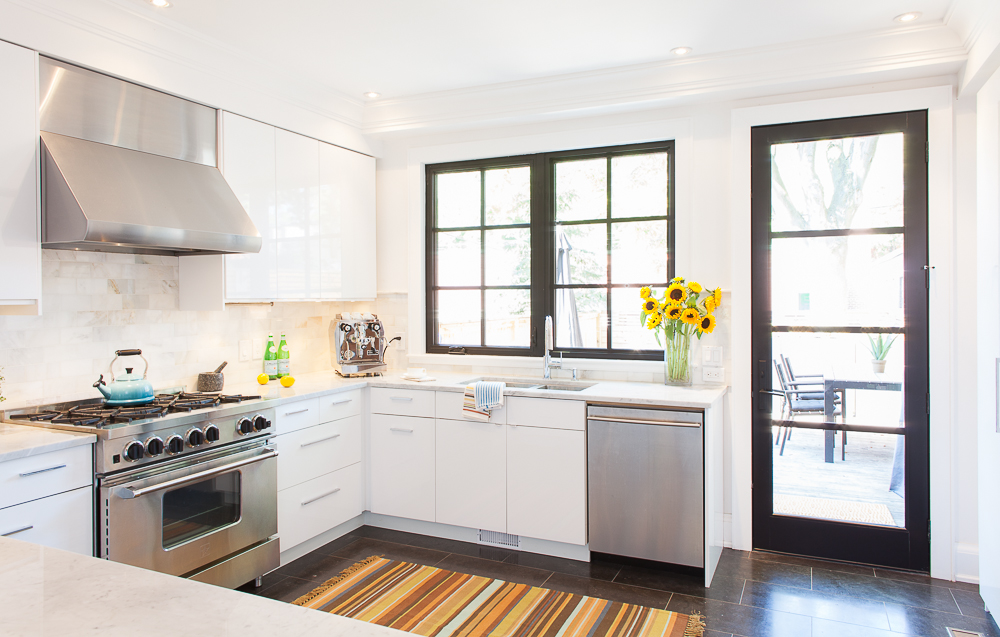 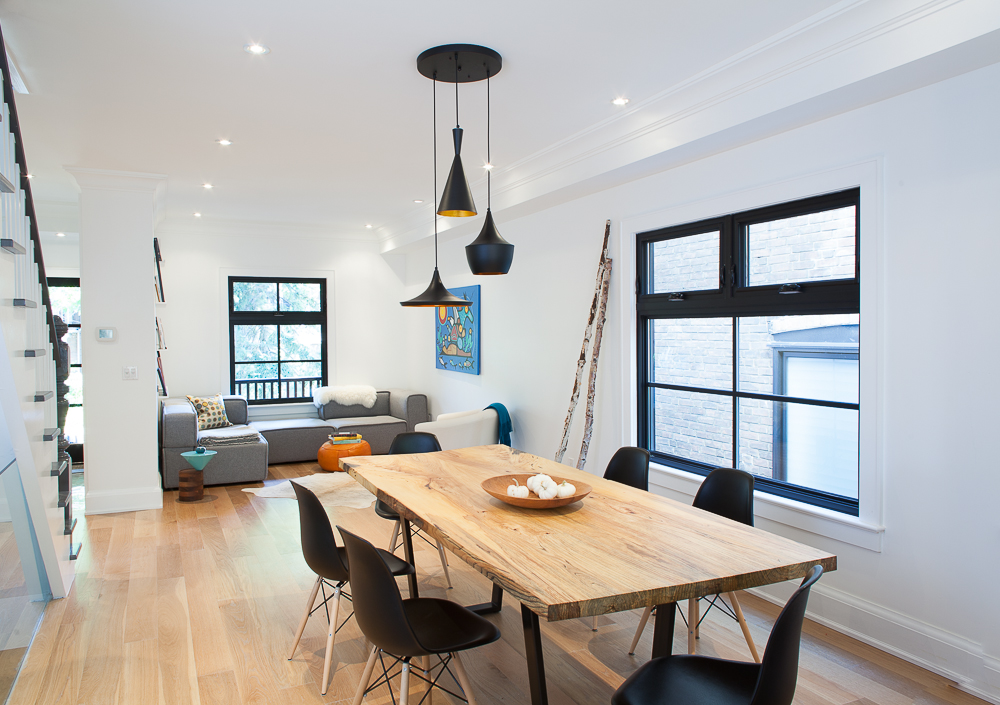 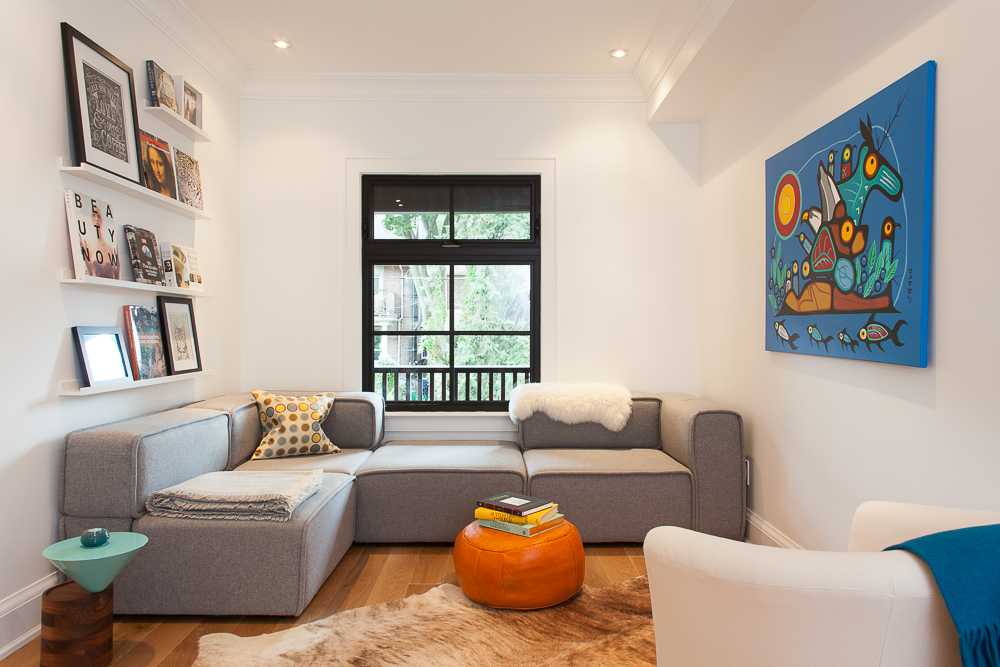 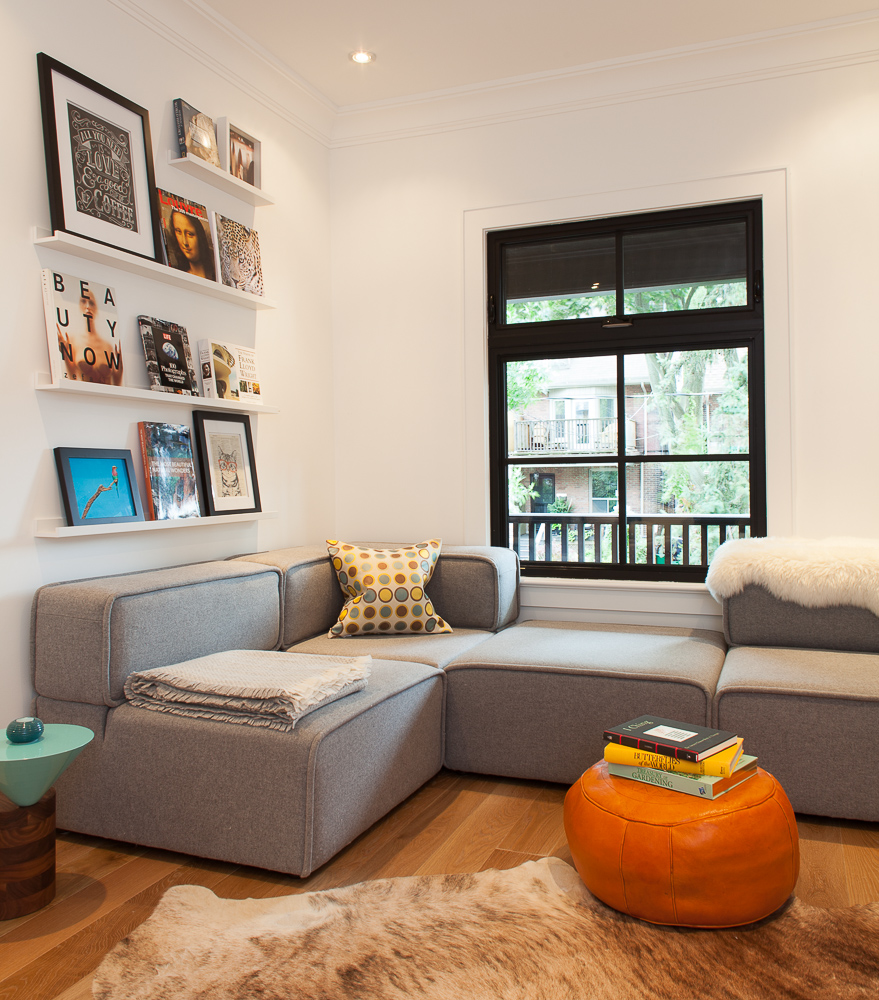 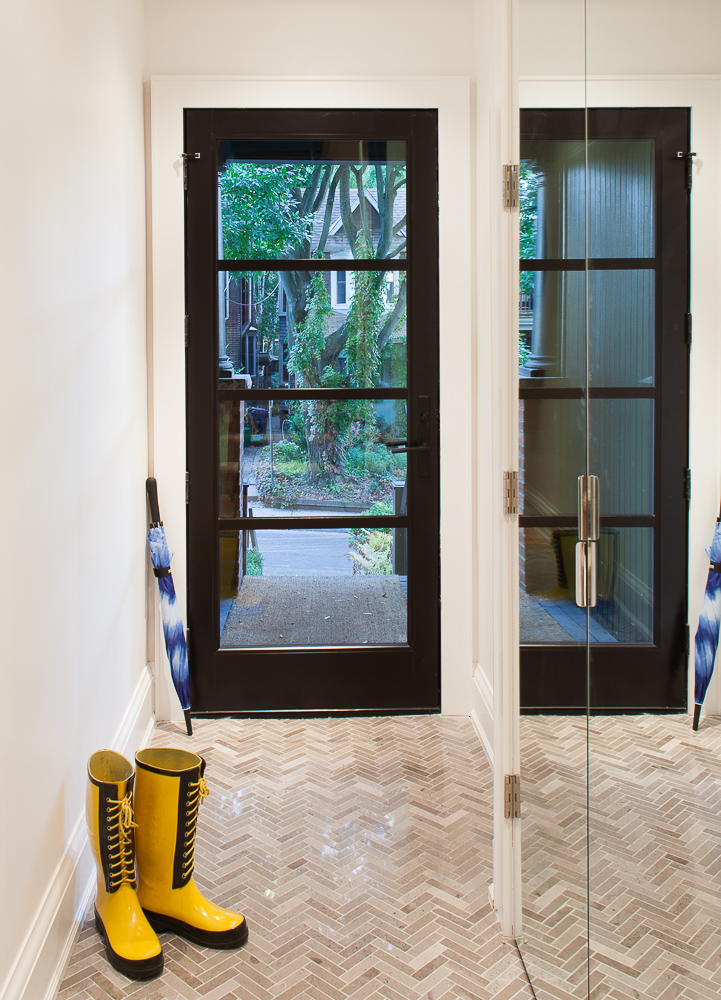 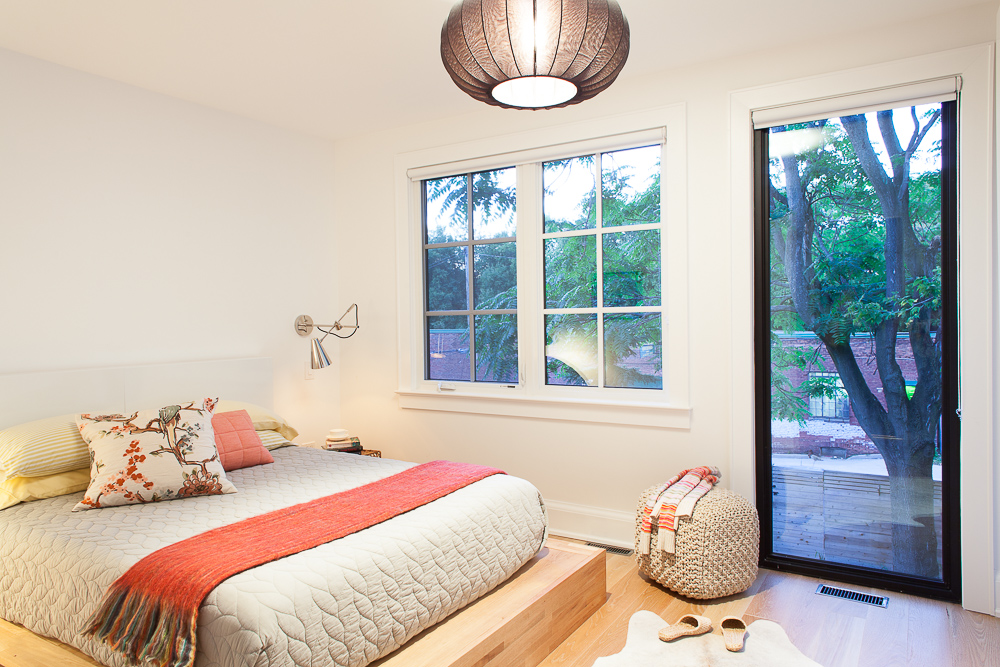 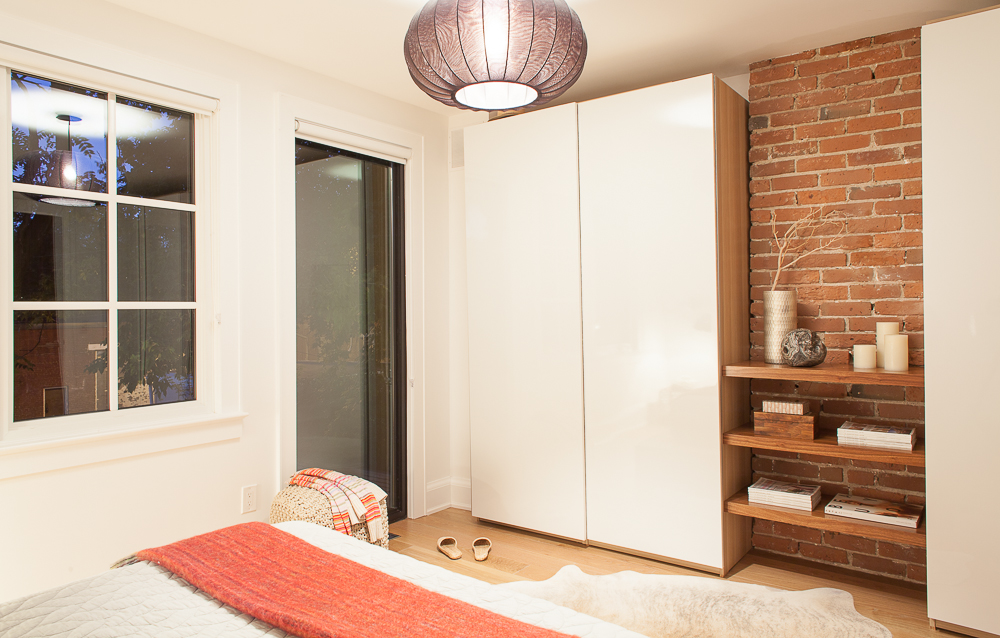 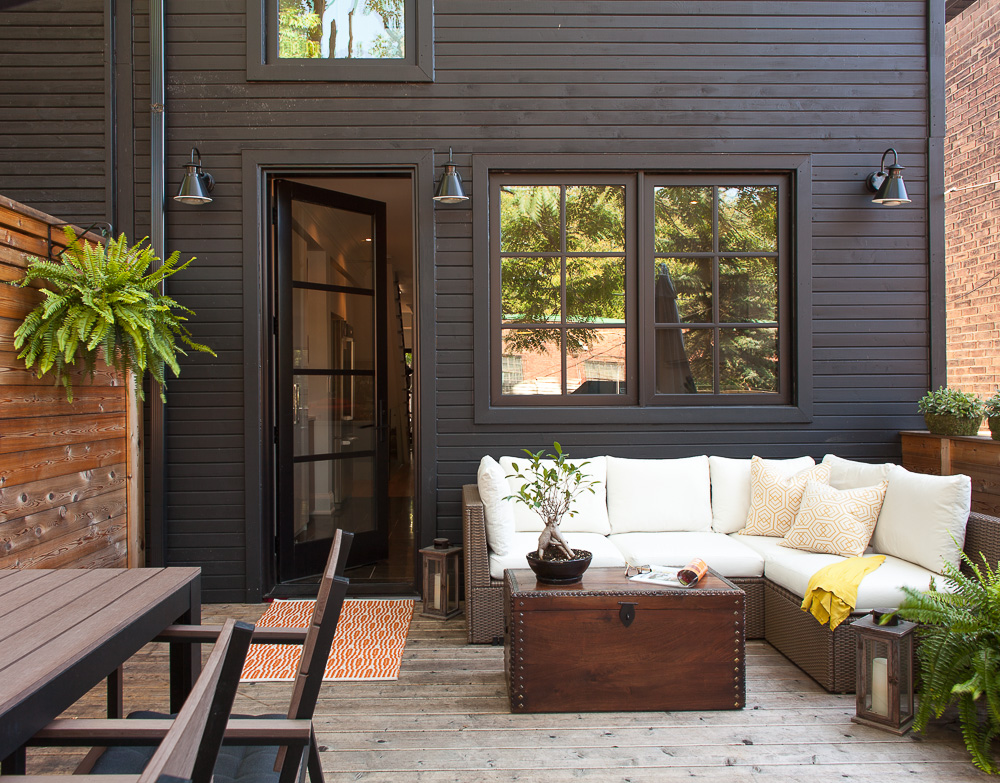 The Leslieville house had charm … at least from the outside.

When Alex El-Asfahani and her contractor brother, Oliver Wigington, found it, they immediately recognized its potential in an evolving neighbourhood, even though the interior of the semi-detatched house had problems.

It had been divided into a duplex at some time in its history. “It wasn’t attractive and we wanted to convert it back to a single-family home,” says El-Asfahani, the lead designer and president of ModernKind Inc. It would be the first official project of her two-year-old home-renovation and remodeling business, and El-Asfahani believed there was something to work with. The house, thought to be built around 1920, had good bones.

The interiors were gutted down to the joists, the framing and the chimney’s exposed brick. El-Asfahani wondered if one of the home’s previous owners was a bricklayer, as “all kinds of hidden bricks” appeared around the house as it was stripped down and put back together.

Exposing brick on the basement walls, and on the chimney in the kitchen and master bedroom was part of her plan to “bring back that character.”

“Whenever I buy a house, I get a feeling from it. I sense whether it has its own soul, or I take cues from things that were originally part of the house,” she says.

She found and restored two newel posts for the staircase. “They were different heights when I found them so I had my stair guy add to the base and fix them up,” she says. “Once we brought them back to life, painted the stairs and added a runner, the style became more transitional, or classic-modern. I like little nods to the past, but to look to the future, too.”

To complete the look, El-Asfahani installed plaster moldings, but since she was remodeling with an intention to sell, she left the walls as “a blank canvas with a neutral palette.”

She says she avoids designing “with anything too trendy” to keep the look timeless. “I love white walls in houses because I like textures and finishes to become more of a focal point,” she says. “People feel like they need to paint a room a colour to make it interesting, but I like a clean palette for the walls and then to layer other [decor elements] and materials to add interest.”

One choice that punctuated her minimal design aesthetic was black-framed windows and doors. Adding that bit of contrast, she says, helped to frame the rooms. “Sometimes if you do an open-concept layout but don’t have contrast, it can feel like a void,” she says.

El-Asfahani brought in Ken Simpson of Fieldstone Windows & Doors to install the vinyl windows and fibreglass doors. The master bedroom’s floor-to-ceiling window was added to welcome in more light and bestow a modern touch.

Although El-Asfahani approached Simpson with images of black-steel-framed windows, he suggested a window with the same look that is a more environmentally sound product. “One of the drawbacks with the steel industrial look is that the windows look great but they’re not really good in our climate,” says Simpson, who has operated Fieldstone Windows & Doors since 1997. “The glass is often warmer than the steel, so it will ice up.”

In addition to adding new and wider windows and allowing more light in through glass-paned fibreglass doors, El-Asfahani introduced a skylight over the main staircase and one in the upstairs bathroom. One of the challenges of the flat roof was that it didn’t accommodate recessed lighting in some spaces, so she added sconces in the master bedroom and pendant lights where possible.

Letting in light, opening up the space, and modernizing the house was no small feat, but ModernKind Inc. transformed the two-and-a-half-storey house for resale in only four months.

Functional and beautiful, this renovated home now has charm throughout.

Treat your mom to one of these wonderful gifts on her special day.

A Silk Purse from a Sow’s Ear

It was a former retirement home, a quadruplex on a block of similar buildings in NDG, most of which were...

IT’S IN THE DETAILS

Coach houses were originally utilitarian buildings – garages for horse-drawn carriages and, later, automobiles – with living quarters above for...

The proximity of a condo to the dining, nightlife and cultural activities of downtown Montreal sold Salvatore Falci and his...

FROM BRUTAL TO BEAUTIFUL

Brutal. It’s not a word one often associates with a backyard, but landscape architect Myke Hodgins had hit upon the...

Same street. More space. When Allen and Michelle Aptekar decided to buy a larger home to give each of their...

FROM TRAGIC TO TERRIFIC