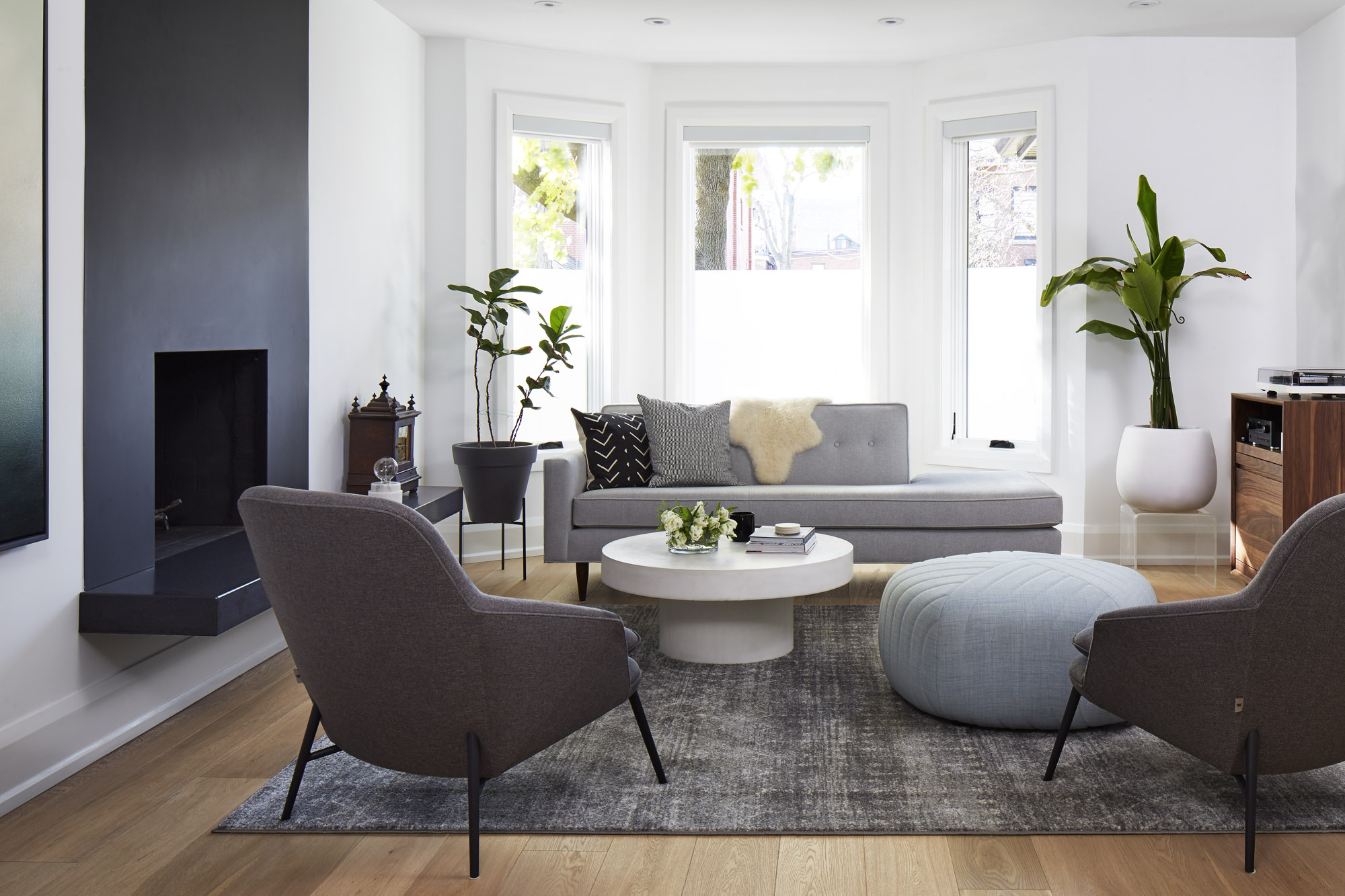 In a home renovation project, there are many moving parts, but only two fundamental elements: planning and design. Each is a separate, yet dependent activity. And neither should be given short shrift, for when they come together flawlessly, as in a symphony, perfectly performed, they reveal themselves to be what they truly are – sister arts. These two sibling crafts are at the centre of the story of the re-imagining of this three-storey house in Toronto’s Little Italy district.

This tale begins with a young couple who were planning to start a family, but before they did, set out in search of what they called their “forever home.”

“We were looking for a house that felt like home,” explains Nicola Hockin. It was a simple objective, yet one that was difficult to quantify. That is, of course, until they found it.

“It was dated and mish-mashy, but it felt like home,” Nicola says. “The spaces were good. We could see the potential. It had all the right bits and pieces.”

What it didn’t have was a functional basement, nor the right layout and look on the main and upper floors. Perhaps to some, these hurdles may have proven too cumbersome to overcome. But not for these two. They had a plan. And they had a team.

That is where designer Kirsten Marshall and contractor Nuno Teixeira came in. So the planning and designing began.

Built around 1910 on a prominent old street in Toronto’s Bathurst and Bloor area, the house had already undergone a major renovation in the 1990s. “A lot of the ornate character had been removed,” says Marshall, the principal at Palmerston Design.

The first order of business was digging out the basement because no one taller than 5-foot-6 could stand upright in the space. In the basement, they then installed a gym, and a laundry area and now have space for a den.

Then, they turned their attention to the main living areas.

Despite the earlier renovations, the space was still separated into individual rooms, Marshall explains. “They wanted to open it up.”

“We re-planned the main floor and we re-planned the second floor,” Marshall says. “It was a complete gut. The only thing that we maintained was the front door, and even that was not original.”

Removing several walls necessitated reframing much of the structure with large steel beams, says general contractor Teixeira, the owner of Caliber Group, which oversaw all the work.

On the list of must-haves were an open main floor space to give the house a good flow, a walk-in closet for each of the owners, a master ensuite bathroom, and a nursery.

What they ended up with is a clean-lined modern home with a unique timeless charm, and a stately exterior. It is a place that now not only feels like home, but looks the part, too.

With more than 3,500 square feet of living space, the new look offers plenty of room for everyone to have a different favourite spot. “I love the living room,” says Marshall, who then gets more specific: “The elevated fireplace.” The old brick fireplace, which had been painted in a previous renovation, was replaced with an elevated hearth made of honed granite, suspended off the firebox. The hearth also doubles as a bench. The surround is a stunning to-the-ceiling sheet of matte-black powder-coated steel.

“I like the drama it gives the room,” she continues. “I also like the fact it’s functional. You can sit in front of the fire, and it gave our client space to display some stuff. It’s a gracious living room.”

For Nicola, who has given birth to their first child since moving in, she is oddly torn between the back family room and the third-floor bathroom when asked to cite her favourite spot. “The back family room really came together,” she says. “We opened the back wall with these gorgeous sliding doors. It’s where we spend so much time as a family.”

Those “gorgeous doors” are nothing short of spectacular. They are custom-built 10-foot-high panes that run the complete 20-foot width of the back wall. Teixeira describes them simply as “epic.”

And the third-floor bathroom? It has the look that Nicola has wanted for years. In fact, the theatre stage manager who describes herself as the kind of person who “redecorated her bedroom 30,000 times as a child,” had an image of what she wanted her bathroom to look like, which she had saved on Pinterest. “I had it pinned for years,” she says, “an image of a beautiful tub like this against a wall of dark tile.”

The man of the house is not without his favourite spot, too. The upstairs office, with its custom floor-to-ceiling showpiece bookcase is designed to almost exact specifications to how Nicola’s husband, Mark, envisioned it.

“He came to us with an image of a bookcase that he loved,” Marshall says. And that is how it was designed, right down to how each shelf should be subdivided.

The makeover of the house, from beginning to end, took about 10 months to complete.

“It has this old Victorian-style presence with a modern feel as soon as you walk in,” Teixeira says.

“It’s beautiful,” Nicola adds, reflecting on how it all turned out. “It’s our dream home. And we got to get it pretty early, which is pretty great for us. We certainly think of this as a 20-plus-year home.”

they moved in, Nicola was five months pregnant with their son. “The timing was perfect,” she says, explaining how that gave them time to settle in and set up the nursery. “And be here for his whole life,” she says before quickly adding, “which is the plan.”

Planning and design: sister arts that flawlessly work together. •

A Suite Of One's Own