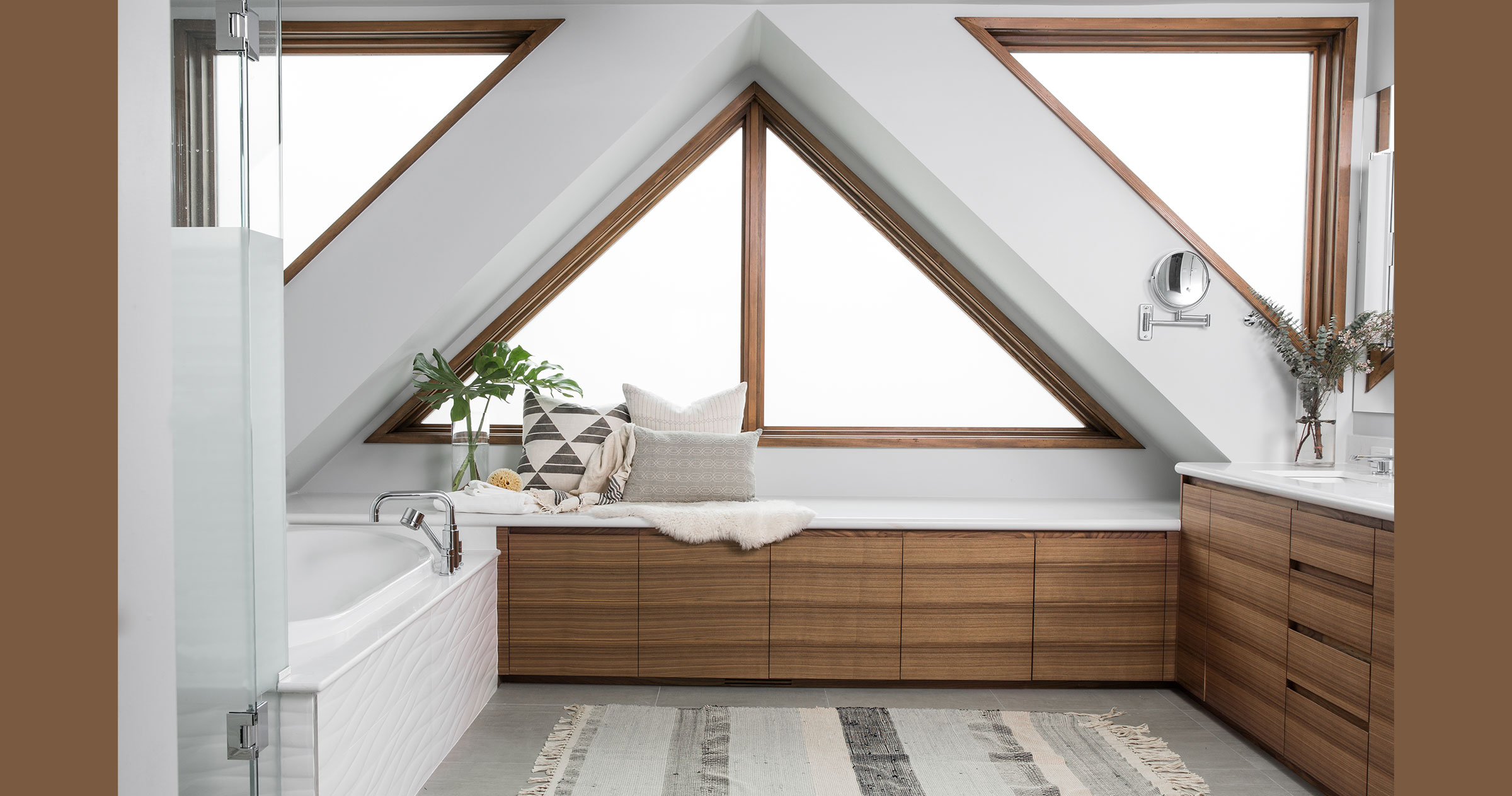 For an interior designer, turning an awkward or cumbersome feature in a house into a highlight that becomes a defining element is a huge achievement. And that is exactly what Toronto designer Alana Fletcher pulled off in one of her recent projects.

The house – in the Yonge Street and Eglinton Avenue district – is a typical three-storey home, built around 1970. It was well laid out except for the top floor, according to Fletcher, who runs the eponymously named Alana Fletcher Interiors design company.

“The third floor had a lot of quirky elements which made it hard to enjoy,” Fletcher says. The stairs came up into the bathroom at the rear, which prevented the building of a deck out there. And there was a huge circular window in the bathroom and three triangular windows at the front that were, well, “awkward,” she adds.

The couple living there with their two young children, who wanted to convert the third level into a master retreat, didn’t want to keep those features, which they considered undesirable. Fletcher saw it differently.

“I saw the triangular windows as a chance to embrace the architecture,” she explains. “They are really such a great, defining feature. I’m just thrilled we were able to retain that element and highlight it.”

Indeed, those windows – now accentuated by moldings made of walnut, a wood that is used throughout the third-floor space – truly seem to be the focal point of the master bathroom, bedroom and office, which are connected by sliding doors that can all open to create one enormous, bright and functional space. And Fletcher circumvented any issue with fitting blinds by using Loewen windows for the bathroom, which not only block out the sun but also prevent people from seeing in.

Installing a window seat further proved that the windows were a design element to embrace. Fletcher says the seat is now a favourite reading spot for the couple and their children. The husband wanted a modern, clean look while the wife favoured mid-century. “I kind of married the two,” says Fletcher, who used crisp lines with warm touches to keep them both happy. A navy wall behind the bed, accented by pretty linen window shades that resemble watercolours, adds another layer of warmth to the space to offset the white walls and cabinets.

One disappointment for the couple was that Fletcher couldn’t fit a walk-in closet into her plan. But it worked out as she incorporated a wall of custom built-ins into the master bedroom, and the couple has ample storage for clothing, bedding and of office supplies.

It was important to the homeowners to have an office with a desk for each of them; Fletcher not only accommodated their request but created a gorgeous office space with walnut desks and cubbies. And the office is right off the deck, which gives the space a feeling of serenity and being in the trees. “What I strove to give them was a livable space that gives them longevity,” says Fletcher. “It is a solutions-based design with the goal of having everything at their fingertips.” •