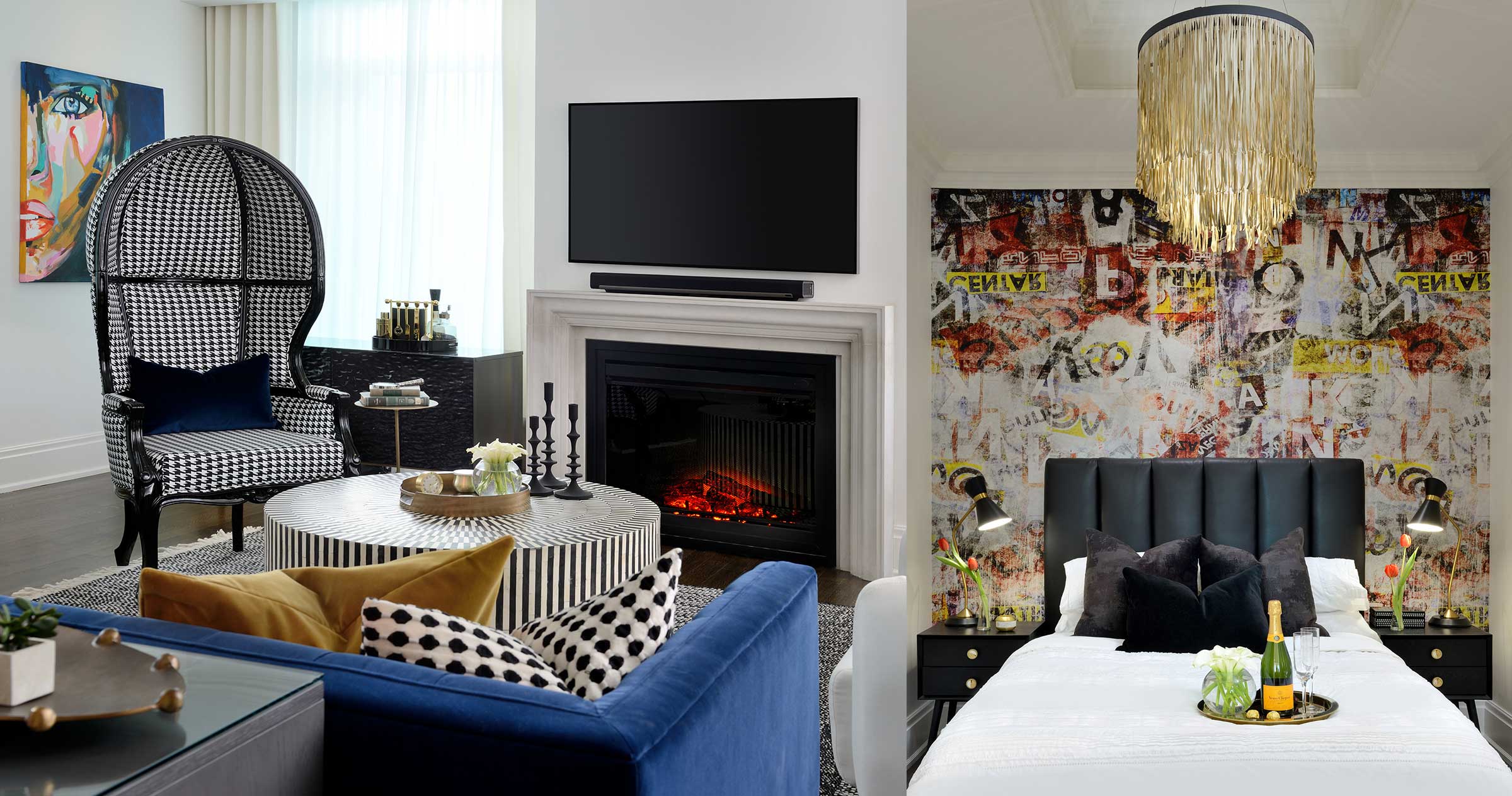 Street and chic – two interior design aesthetics that are not often wed. Throw in regal as well and you’ve got the design challenge facing Iman Lalji in this two-bedroom hotel-condominium apartment.

Lalji is the owner of Designed by Iman and has known the apartment’s owner, Q Dhalla, for about eight years, first as a friend and now as a client. Q has a home in Brampton, but travels about half of every month on business as a developer of hotels and retirement homes. He needs an in-town pied-à-terre, somewhere to stay closer to clients and to entertain when he is in Toronto.

“Something between street art and chic was my design guideline for Iman,” says Q. “I wanted a lighter palette, something airy but not completely white, and with warmer tones.” Apart from the aesthetic, Q requested that Lalji incorporate local and East African (his family’s origin) products and artwork as much as possible.

“Q sent lots of inspiration photos,” Lalji says. “He expressed that he really liked graffiti, kind of like a street vibe. He sent pictures of street art but he would also send me photos of very regal sorts of places. The challenge was to somehow create a space that reflects a street vibe while still feeling luxurious.”

Before they could set to work on decor, however, Q had to find the right apartment. “I was looking for a place that had some prestige in its location, and I wanted somewhere quiet,” he says. He started searching during the summer of 2018 and figures he looked at “a couple dozen units. I asked Iman for her design opinion whenever I had a few to look at. This one was a reasonable price, in a good neighbourhood for me, had high ceilings and a layout open enough that we had a clean canvas.”

The apartment, in Toronto’s financial district, is approximately 1,650 square feet. It encompasses an open-concept living-dining-kitchen area, a master bedroom with ensuite bathroom, another full bathroom, and a second bedroom.

Lalji’s design strategy was to use luxurious materials and fabrics and colours, something that would stand up to “some pops of graffiti and loud patterns and bold pillows.” Witness the living room with its wool-and-cashmere carpet and velvet sofa enlivened by jazzy black-and-white patterns on cushions, throw and coffee table. A spectacular porter’s chair in the living room upholstered in black-and-white houndstooth fabric further illustrates the concept.

Even more arresting is the guest bedroom, which is moody in shades of black and red. The luxurious connotations of the overstuffed headboard, velvet accent pillows and textured bedding contrast with the street vibe of the graffiti-themed wallpaper and the faux-leather look of the pendant light. Lalji calls the wallpaper “really funky” and notes that “the subtler patterns for the furniture balance between soft and loud.”

If the guest room wallpaper is dense and intricate, so too is the wallpaper in the master bathroom’s water closet. Graffiti-like in its own way, it has wide black lines winding sinuously up and down the wall.

“When I first saw the bathroom wallpaper, I didn’t like it,” says Q. “It’s generated polarizing reviews. Some people love it; some say ‘What was the designer thinking?’ Iman said ‘Let it grow on you.’ ”

And grow on him it did.

Although the local (i.e., “street”) influence is obvious in certain aspects of the decor, nods to East Africa are more subtle but ubiquitous. In the master bedroom, custom-made nightstands on each side of the bed feature bone inlay. A striking mirror over the master bathroom vanity has a frame of bone, mother of pearl and marble. Another mirror, in the foyer, is framed in bone and onyx. A corner of the master bedroom is decorated with three photographs of African animals: a male lion, a mother elephant and her baby, and a giraffe.

Q moved into the apartment in January, and he’s discovered that it suits his lifestyle just fine. “It’s perfect,” he says. “I’ve had several parties, and out-of-town guests stayed there. It’s working out really well.” •