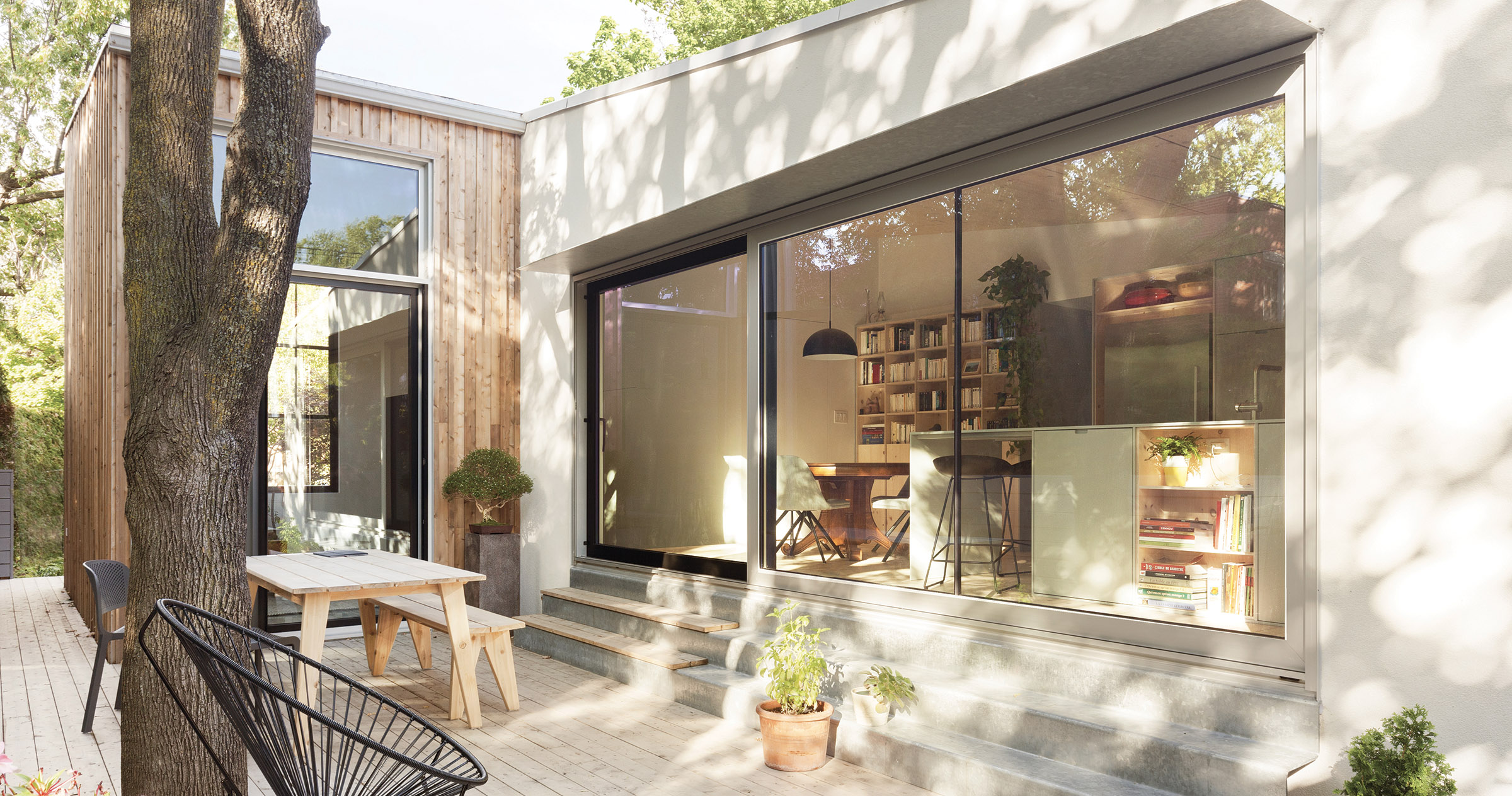 A couple downsizes to the most unlikely space: their own backyard

Once upon a time, a tiny guesthouse built in the late 1890s sat in the corner of a wooded backyard in St. Lambert, behind a larger, brick-clad family home.

The 600-square-foot shack was in such terrible condition that in 2008, when Jean-Luc Gagnon and Marie-Hélène Larouche bought the property it sat on, the deed of sale included a demolition permit, courtesy of the city.

However, instead of razing the backyard hut, the couple hired the aptly named architectural firm la Shed to completely reimagine what ultimately became their dream house.

“From the beginning, we knew that one day, we’d live in the smaller house; we wanted it to be our retirement home, our pied-à-terre,” explains Jean-Luc, a trumpet player with l’Orchestre symphonique de Montréal.

For eight years, the homeowners lived in the front house, restoring its Victorian features. They also updated the guesthouse and rented it to various tenants while they fine-tuned their vision for the future: Sell the big house and move into the backyard abode.

Between tenants, the couple enjoyed their little retreat, treating it as a weekend chalet.

Finally, in 2015, they moved forward with their big plan. After nearly a year of bureaucratic wrangling and hoop-jumping, the couple’s land was officially divided horizontally into two equal lots of 3,000 square feet, becoming a co-property.

The results of the year-long renovation are spectacular: the Scandinavian-modern one-bedroom space features expansive living areas atop a small footprint.

“Because the house was too close to the properties behind and beside it, we had to keep the same footprint in certain spots without modifying the structure,” says Jean-Luc. “We also couldn’t demolish more than 50 per cent of the building; otherwise the city would’ve refused to let us rebuild it.”

The city allowed the homeowners to bump the house’s square footage up to 930, but architect Yannick Laurin, who is also la Shed’s co-founder, faced a long list of restrictions, including ceiling height and the contour of the home. Also, because the house could be extended only toward the front of the property, privacy was a concern.

“We reconfigured the architecture and the windows so there are no direct views, and when you’re in the backyard, no windows face there, so it’s very secluded,” says Laurin, whose team designed the home to wrap around a private outdoor cedar deck on the southwest side of the property.

Surrounded by mature Norway maple trees, the house has the ambience of a country cottage.

“The original guesthouse had lots of knotty pine, and a very rustic ambience; Jean-Luc and Marie-Hélène wanted to modernize and make it more comfortable, while keeping that simple feeling of being surrounded by trees in a very restful place,” says Laurin.

To maximize privacy, la Shed played with sightlines and angles. Other than one small window that overlooks the original backyard, the main living spaces all face toward the new hidden courtyard. From the street, onlookers would never guess how much space lies beyond the cheery green front door.

“The most unusual thing about the house is that in the kitchen, the ceilings start at just seven feet and we couldn’t change that,” says Jean-Luc.  So la Shed created a 40-foot-long incline beginning at the back of the house and spanning to the front, where the ceilings soar to14 feet. “Cooking in our kitchen is wonderful, because we’re in front of a 17-foot-wide window which faces west, where we have a view of the trees. And the afternoon light is extraordinary; it floods the kitchen and dining room.”

In a nod to the cabin’s original look, la Shed installed new red pine flooring throughout, along with white pine ceilings and built-in wood bookcases.

The stainless-steel-clad kitchen island faces the outside deck, while the sleek grey cabinets conceal the master bedroom and bathroom just beyond. Three steps separating the dining room and kitchen from the living room divide the space while maintaining the flow.

La Shed pulled in as much natural light as possible into the space by installing a skylight in the bathroom and 12-foot-high windows in the living room.

“We get sunlight from the south, so we just love being in this room,” says Jean-Luc. “The light makes it seem like we’re outside.”

Marie-Hélène and Jean-Luc moved in last September, and plan to stay for many years. “We were thrilled with the work La Shed did; they really kept that feeling from our original little house, of being in a cottage,” says Jean-Luc. “Now that we’ve finally built our small dream house, we’re living the perfect village life in St. Lambert.” •

Whistler getaway home is built with family in mind