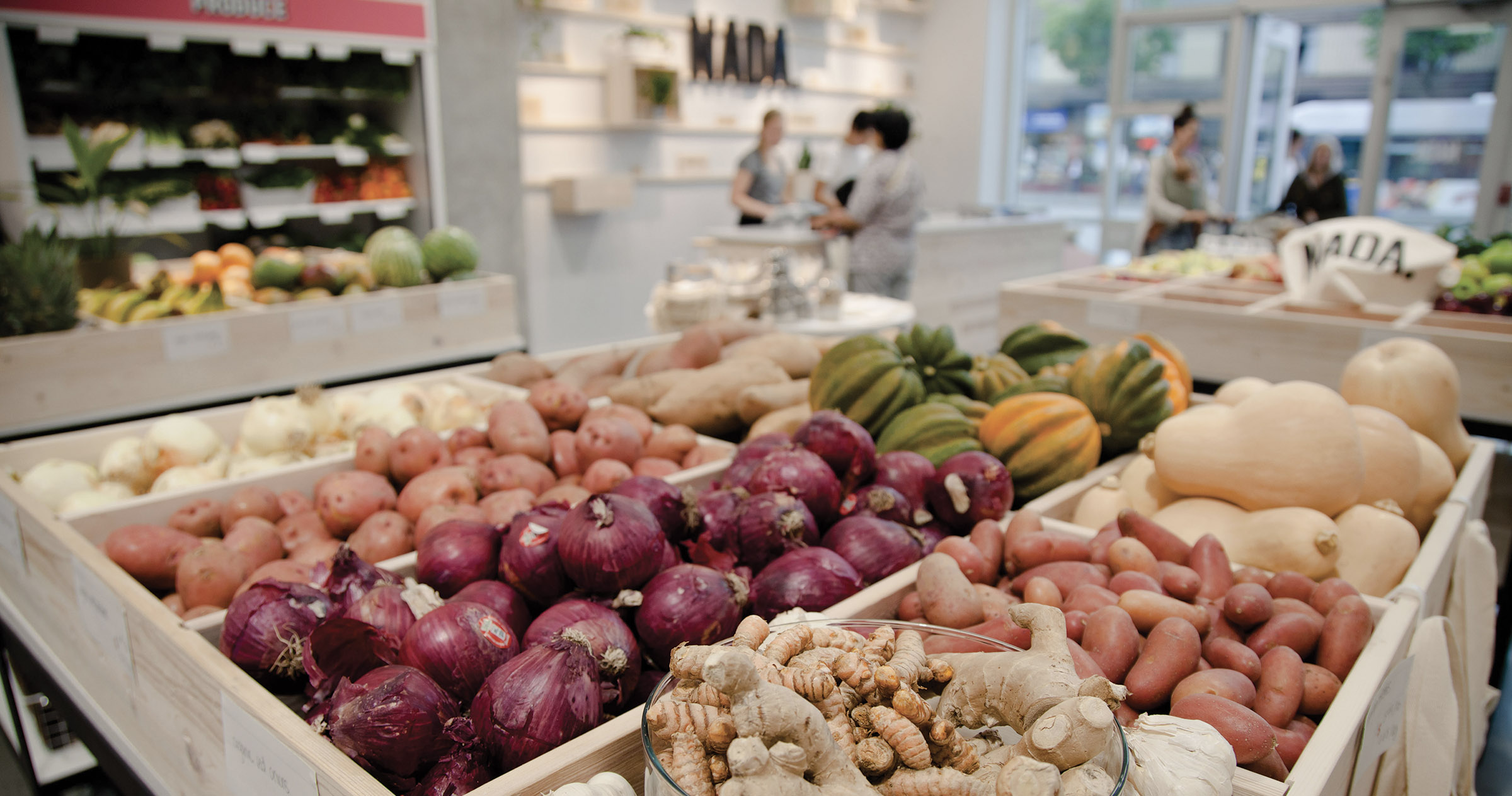 Sia Veeramani and her husband have a tradition around New Year’s: they do a big clean-up and take out the trash – all the trash they’ve accumulated over the previous 12 months. This year, it fit into one small bag: stickers and twist-ties from fruits and vegetables, labels, broken rubber bands, scotch tape, band-aids and a few other assorted things that couldn’t be reused, recycled or composted.

Veeramani has lived the zero-waste ethic since 2012 and, along with business partner Valerie Leloup, is the co-founder of Ottawa’s NU Grocery, one of a growing number of stores across the country that aim to help people reduce their waste. These stores have moved beyond selling bulk supplies in bins. They are designed for zero-waste shopping and aim to reduce waste along the supply chain. They encourage customers to bring their own refillable bags, containers, bottles and jars for all their food and/or lifestyle items: everything from ketchup to toothpaste.

And they carry everything from compostable bamboo toothbrushes to ingredients for do-it-yourself cleaning products.

For Veeramani, with her background in environmental sustainability, it was about “walking the talk,” she says. “It took a while to start, but once we had our routine it became easier.”

She and Leloup connected through Bea Johnson, the guru of the zero-waste movement, who chronicled how her family of four started to live more sustainably and almost completely eliminated their garbage in her book, Zero Waste Home, published in 2013 and translated into 25 languages. Both had either attended her workshops or been in touch with her separately, and each hoped to set up a zero-waste store. They connected by email, opened NU in 2017 and, since then, have doubled the number of products they sell to more than 700 from 350. Their biggest sellers are accessories that help minimize waste: produce bags that eliminate the need for disposable plastic, beeswax food wrap, compostable kitchen brushes.

Many zero-waste stores have similar histories: their owners wanted to make a difference and help others reduce their waste, too. All of them say consumer response has been enthusiastic; many are planning to expand or open second locations.

In Halifax, Kate Pepler says she felt depressed with the state of the world upon graduating from Dalhousie University a few years ago with a degree in sustainability and environmental science. “There’s definitely a shock factor when you hear about another (dead) whale washing up with a belly full of plastic. People are just getting fed up with it and with having to deal with the waste,” she says.

Tired of travelling around the city to various stores to source the package-free or sustainable products, she put together a business plan to bring them together under one roof. She recently opened The Tare Shop, a combined package-free grocery store and café. There are no disposables at the café, but rather mugs for customers who drink their coffee in-store. However, anyone wanting to take out coffee or tea must take their own travel cup or “borrow” from the mug library. Sometimes, new customers are caught by surprise, she says, but almost all of the borrowed mugs have found their way back.

One of the biggest challenges in running a zero-waste store, says Thomas Tiberghien of Montreal’s Vrac et Bocaux grocery, is finding suppliers who will sell their products in returnable/reusable containers, and persuading them that they, too, need to rethink their packaging and find ways to cut waste. Building relationships with them becomes important, he says. “We choose the people we want to do business with, who have similar values.” Almost all his products are organic, and he tries to provide as much of the variety of a regular grocery store as he can, including fruit, vegetables and dairy products. All his customers are keen to try to reduce their waste, he says, and he hopes larger grocery chains will recognize that and adapt. The news this spring that Montreal-based Metro grocery chain will allow customers to use their own reusable containers shows that they’re starting to listen, he says. “It’s a first step for them. They will get there, but it will take a lot of time.”

Toronto’s Karma Co-op didn’t start out with a zero-waste mission when it was established more than almost 50 years ago. Run by a co-op board and its membership, at first it focused on where the food it sold was coming from and how it was being grown, what general manager Talia McGuire calls “the socio-political implications of food.” There was an early emphasis on organic products, then locally grown produce, and now its mandate includes limiting waste. “We’ve hit all of the food trends,” she says.

Sometimes that can come at an increased cost for consumers, but it doesn’t have to. Prices at the co-op are fairly competitive, McGuire says, though members pay a fee and contribute time and work at the store. The co-op doesn’t get the volume discounts larger stores do, but that’s offset by lower prices in the bulk section. She’s managed to cut her own grocery bill almost in half, by choosing just what she needs and not being forced to buy a pre-packaged amount. “A lot of people think buying bulk is like Costco. We think it’s buying what you need, not committing to a six-pack of cereal.”

This spring, Tara Meyer and Lisa Watt opened Canary Refillery & Zero Waste Market in Calgary as an alternative to buying heavily packaged personal-care items, such as shampoo, conditioner, body wash and more. Customers who don’t have their own containers can buy them. As well, the store owners hope to lure customers to try a wider range of sustainable products, a metal razor instead of their usual plastic disposable or natural-fibre cleaning brushes. “We’re part of a much larger movement that is calling for change in Canada and globally,” Meyer says. “Individually our actions may seem small, but collectively they can have a significant impact.”

The drive to reduce garbage has also created a sense of community, both in many neighbourhoods and online, in forums and Facebook groups, says Brianne Miller, co-founder of Nada Grocery in Vancouver. Before opening the retail store last year, she and her business partner ran pop-up shops and made sure they had a presence at local markets and festivals to spread the word.

Now that the grocery, which also includes a zero-waste café, is up and running, they often clear space to host community events, such as clothing swaps and repair workshops. “We spend a lot of time and energy promoting a transparent supply chain, use urban farms and local farms. A lot of our suppliers are audited for things like their carbon footprint and how they treat their employees,” Miller says.

Also in Vancouver, Linh Truong opened The Soap Dispensary planning to sell just refill soaps and cleansers. “I was selling olive oil for soap-making and people were asking, ‘Oh, can I eat this?’ ” That’s when she realized there was room to expand. When the neighbouring shop gave up its lease, she took it over, adding Kitchen Staples to her name and groceries to her inventory list.

Like Tiberghien at Vrac et Bocaux in Montreal, she often gets frustrated with how much waste some suppliers create with their packaging when she’s working so hard to reduce it. “Every six months or so I email a few and say, ‘How about taking this bucket back?’ Sometimes they’ll relent or see the value in what we’re trying to do,” she says.

She has become creative at finding new uses for some of that packaging. Empty boxes are cut up for note paper. Even the string used to seal grain bags finds a second life, and is used to hang things in the store. To get into the zero-waste idea, she says, people need to realize how much waste they generate, and how little of what they put in their blue box actually gets recycled. “I think a lot of people are still embarrassed to bring their own containers to restaurants or regular grocery stores; they don’t want to rock the boat,” she says. “There’s a social shift we need that encourages that and makes it cool.” •