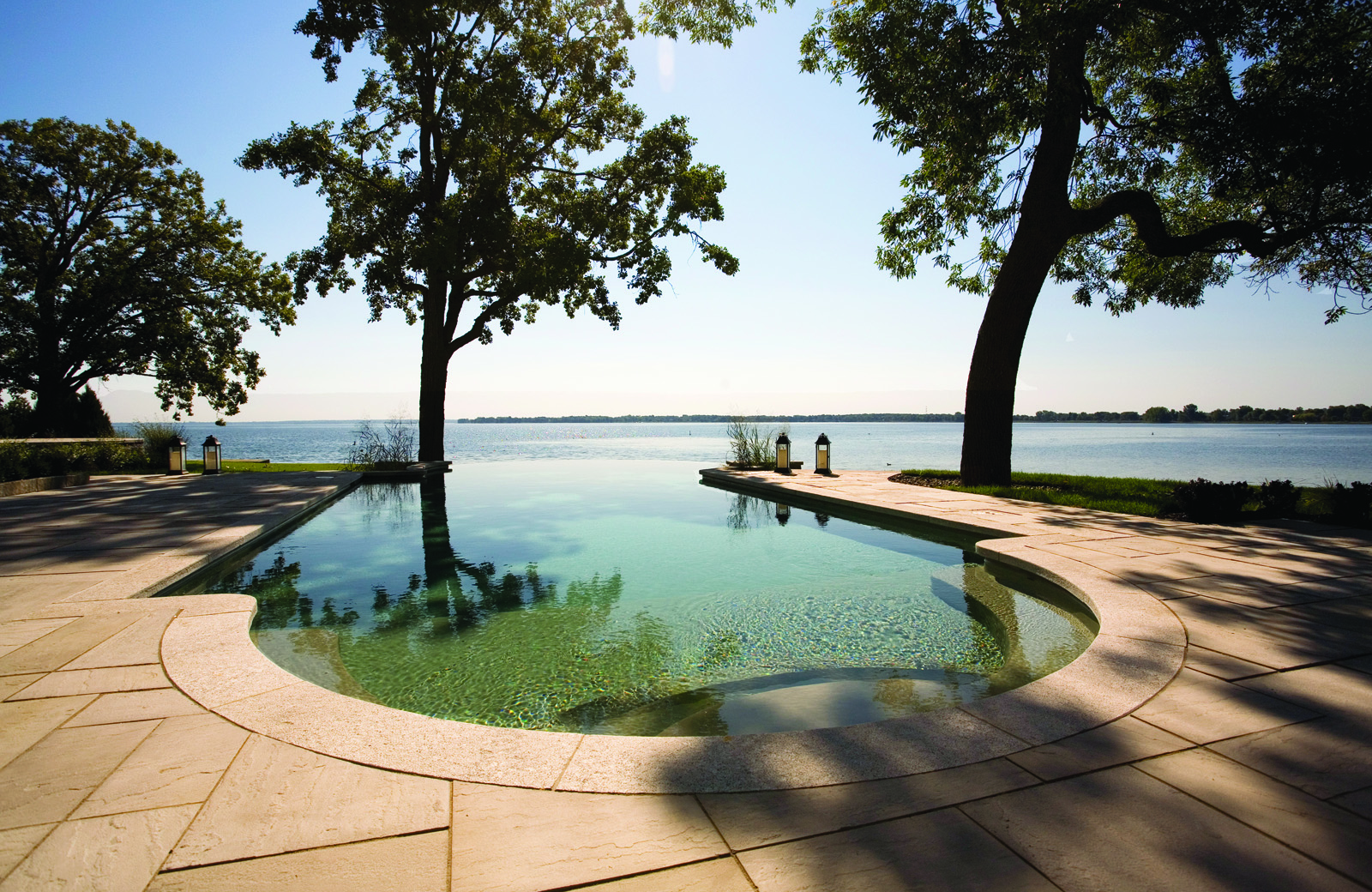 Take these pools to infinity and beyond.

The most successful optical illusions trick the eye into seeing something magical. Infinity pools – where water flows over one or more edges, making the pool appear to blend with a larger body of water beyond – became popular in Europe in the 1990s, especially at hotels. Over the past 10 years, this type of pool has become a must-have outdoor element among North American homeowners with large swaths of land, Instagram-worthy views, and large landscaping budgets.

Infinity pools are believed to have originated in France at the Palace of Versailles in the 17th century, says Reinier van de Poll, owner of Van de Poll Garden Design in Vancouver. “Many would point to the Stag Fountain as one of the first examples of a vanishing pool edge – the use of the horizon and the infinity,” he says.

Today’s vanishing-edge pools are usually installed on properties that look out over a body of water, says Lee Gregory, project coordinator with Groupe Paramount in Montreal.

“When someone has a special lakefront or cliffside property, they’ll often go the extra mile to draw attention to that,” says Gregory. “For instance, for a house on Lac St. Louis we did recently, we matched the colour of the pool as closely as possible to the lake, so that when it was filled with water, it would give the impression that the pool is endless. And the sounds of the waterfalls add to the experience.” 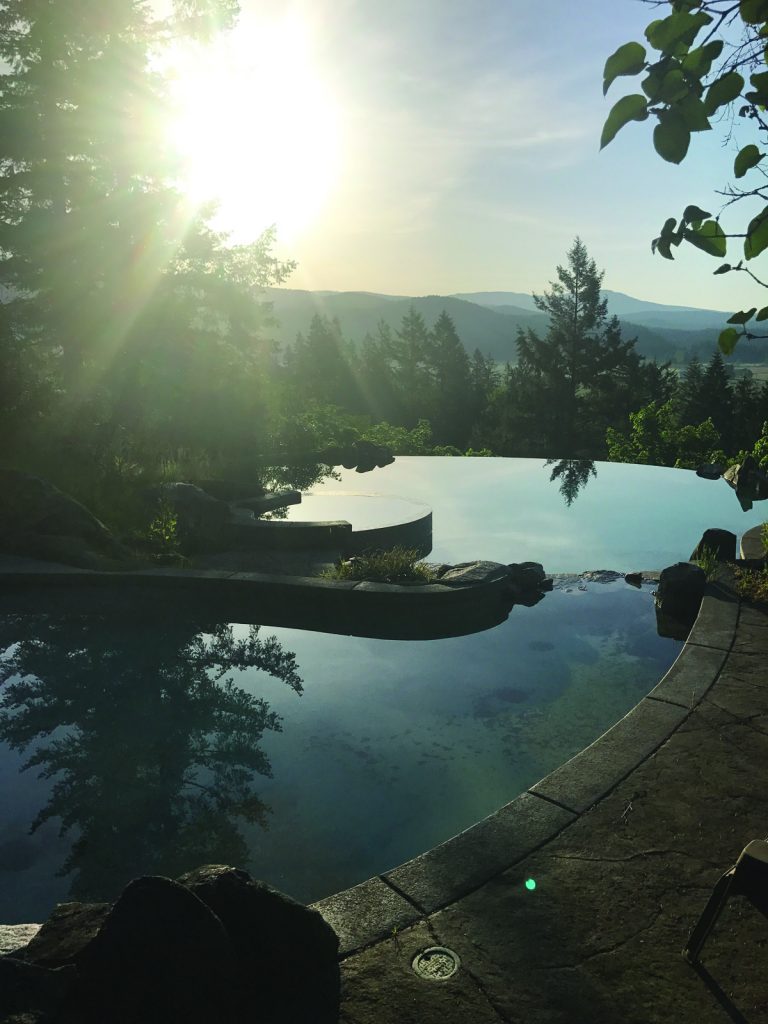 Flat landscape is the easiest canvas upon which to install an infinity pool, but homeowners with sloped properties can have equally spectacular results, says Kennedy McRae, co-owner and landscape designer at Earth Inc. in Toronto. Opting for a vanishing-edge pool on a slope solves two problems: transforming formerly unusable space while creating an especially dramatic vista.

“To create a negative edge, you have to have a little bit of a grade change, so if the body of water that we’re creating is higher than the actual lake, you can build right into the middle of the slope, and when you’re in the pool, it really becomes an infinity pool,” says McRae, whose team designed a show-stopping outdoor space for a two-acre property north of Barrie, Ontario.

Even with no natural water in sight, infinity pools can add interest, he adds. “Some people want an infinity pool when they have a forest setting. A vanishing edge on one side is a cool design element that’s fun to play with.”

This was the case when van de Poll designed a sprawling backyard for homeowner Brian Craig, a father of eight in Pitt Meadows, B.C., who wanted to create a multigenerational retreat. Craig, a developer, had built in 1991 but waited until 2012 to finish the landscaping around his home, which is atop a 70-foot cliff.

“Brian doesn’t have a body of water in the distance; his pool blends in with the horizon,” says van de Poll. “I had to pay a lot of attention to the natural terrain of the site – which was very sloped with a lot of rock outcroppings – to figure out where the pool was going to fit. I orientated the vanishing pool edge slightly over to the east so you were looking towards mountains, trees, and an open view.”

The effect is spectacular, but the pool has value beyond that for Craig and his family. “I’d grown up with a regular rectangular pool, and I wanted something completely different. As my kids got older and began working with me, they actually helped build the pool,” says Craig, whose son Jonathan runs True Light Building and Development Ltd. 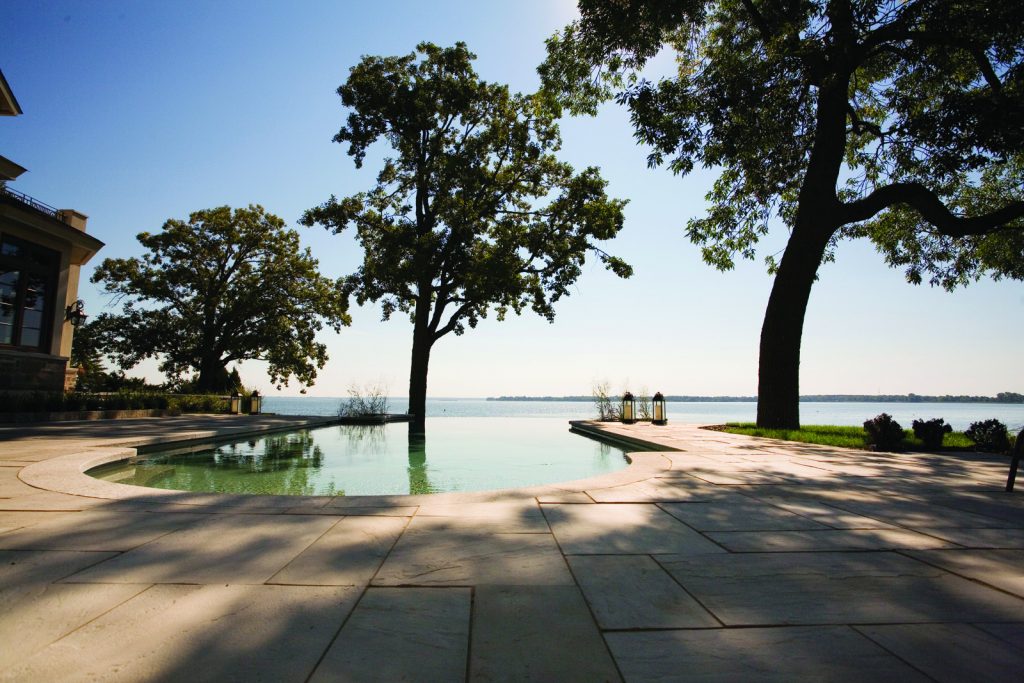 “Everybody’s got their memory of how they put the rocks a certain way. It’s beautiful and natural, and feels like you’re in a lake or a pond. My 14th grandchild is on the way and everyone enjoys the pools. It’s a hub for the family, a real treasure.”

What if you have a less than spectacular view? Infinity pools can help disguise that, says van de Poll.

“If you see your neighbor, a trampoline, and a swing set, a vanishing pool edge could be facing your house and patio,” he suggests. “The concept and mechanics are the same, but instead of it disappearing off the horizon, you actually have the effect of a waterfall from the pools pouring down, and you could be sitting near it on the patio.”

Whatever vista a property overlooks, adding an infinity pool requires plenty of additional work, such as building another basin to capture and recirculate the water flowing over the edge. Expect to tack on $40,000 or more above the cost of a standard rectangular pool, says McRae. “When you do an infinity pool, the other side doesn’t have the ground to push back on the body of water, so you have to make the walls of the pool thicker to create the strength to hold the water inside of the pool,” he says.

Gregory suggests defining various areas in an outdoor space to decide how they will be used. Then, the project should be viewed in a holistic way by factoring in all the elements surrounding an infinity pool. “One big mistake people make is going to a pool company first, one that’s not worried about the landscaping around the pool,” he says. Once the pool is installed, there may not be enough space for lounging or dining.

“You can’t just plop a negative-edge pool in and walk away,” adds van de Poll. “People show us a Pinterest page and don’t realize it also includes $150,000 to $250,000  worth of landscaping: patios, walkways, staircases, lighting, planting, and pool equipment.”

Thoughtful planning and attention to detail can ensure a successful infinity pool project, one that’s good for body and soul.

“My goal is always to create a backyard retreat,” says van de Poll. “At the end of a crazy week, I want people to open their back doors and say, ‘Oh my goodness, there’s my holiday spot.’ ”