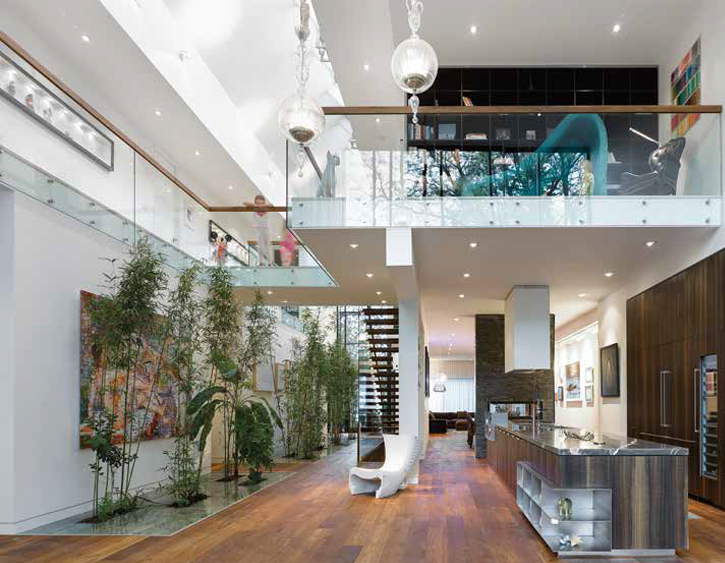 Ornamentation and whimsy spice up a contemporary Lorne Park home 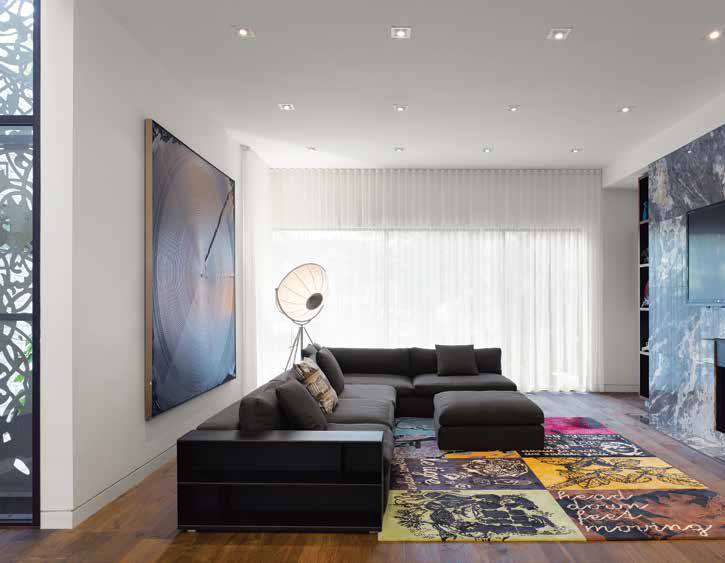 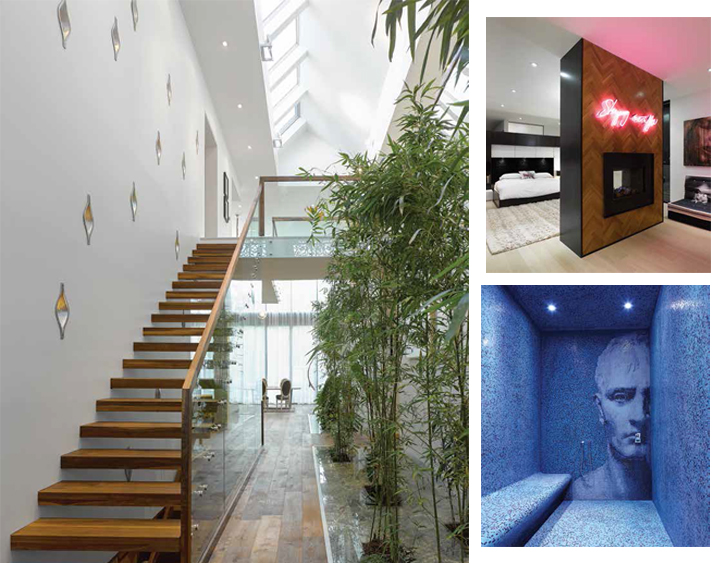 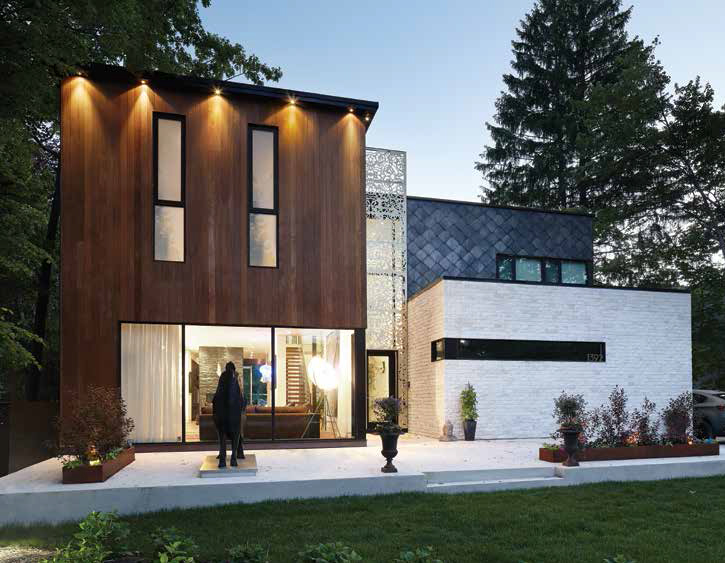 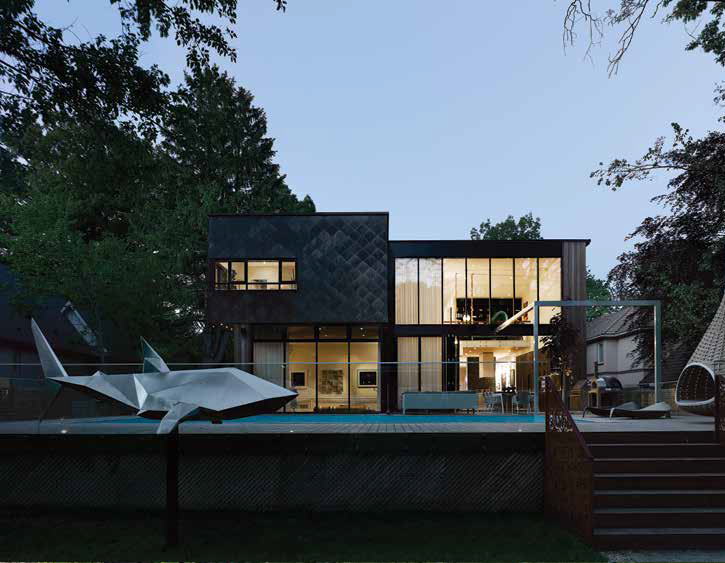 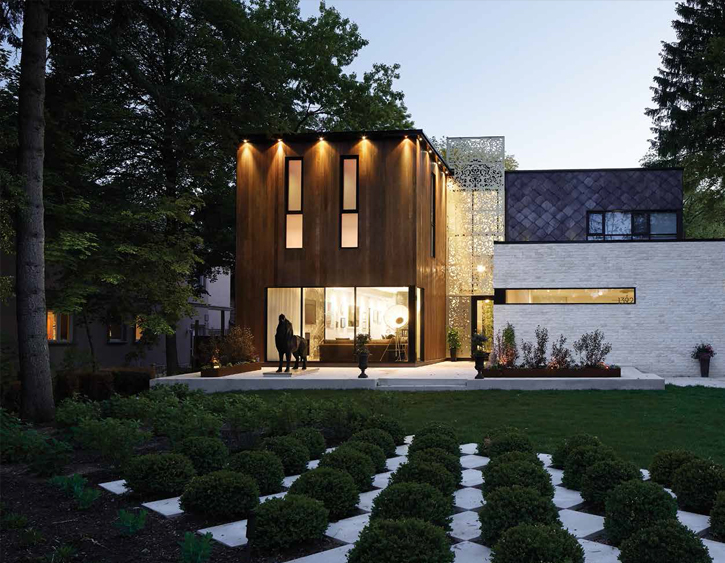 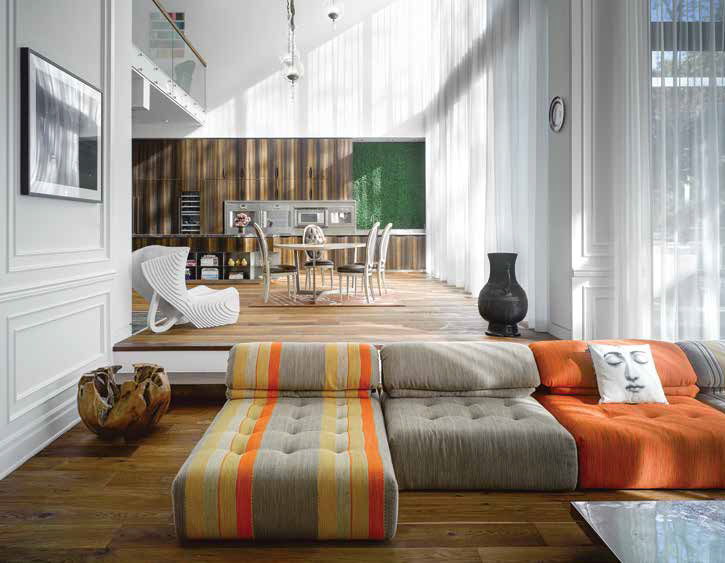 A common complaint about contemporary domestic design is that it’s too minimalist. This contemporary dwelling of Antonio Tadrissi, principal of Prototype Design Lab, is a lively rebuttal to that perception.

“When you talk to people about modern design, the general complaint is that it lacks personality; it’s a box,” Antonio says. “I wanted to prove otherwise in this project, that you could create a juxtaposition of a very modern utilitarian space with ornamentation, with warm elements.

“For instance, that brass scrollwork on the front of my house is basically a privacy screen in front of the full height of glass of the atrium. Instead of the traditional approach of putting up a curtain, I decided to do that screen so I can see out but have privacy. It’s not intrusive; it looks like a vine growing on the glass. Because it’s brass it will eventually tarnish and blend within its environment. It’s not in your face.”

The interior of Antonio’s nearly 8,000-square-foot home follows a similar philosophy, being simultaneously utilitarian and ornamented. At the same time there are whimsical touches, such as the patch of live moss forming the backsplash behind the sink.

Perhaps it’s not so whimsical. It serves a utilitarian purpose: to contribute to hydrating the home’s atmosphere during the long dry winter indoors. Even more so, it signifies a connection between indoors and out, which was a driving factor when Antonio was designing his house.

Antonio is intent on maintaining that connection. “I wanted almost a cottage in the city,” he says. “This area has quite a lot of trees. It’s a very natural setting.”

Like many homeowners, he has indoor plants, but they transcend the usual ficus-in-a-pot approach: he has a bamboo garden.

The two-storey atrium is the connection between the three main volumes of the house. One volume houses the public spaces on the ground floor: kitchen, dining room and family room, which are more or less open to each other. Upstairs is the master suite, a sitting area and a mezzanine library. The second volume, across the atrium, incorporates a guest suite, a sunken living room, a powder room and utility areas on the ground floor, with the children’s three identical bedrooms above. The third volume is the garage. The basement comprises a gym, a theatre with a popcorn machine, a powder room, a full bathroom, a steam room and, in lieu of the traditional wine cellar, Antonio’s scotch room.

The staircase to the second floor and the walkways from the mezzanine to the children’s bedrooms (Antonio calls them “bridges over the forest”) are mostly glass – a key interior design element for Antonio and his wife.

“We have three young children and want to be able to have visual contact with them all the time,” he says.

In other words, design that’s outside the contemporary box.