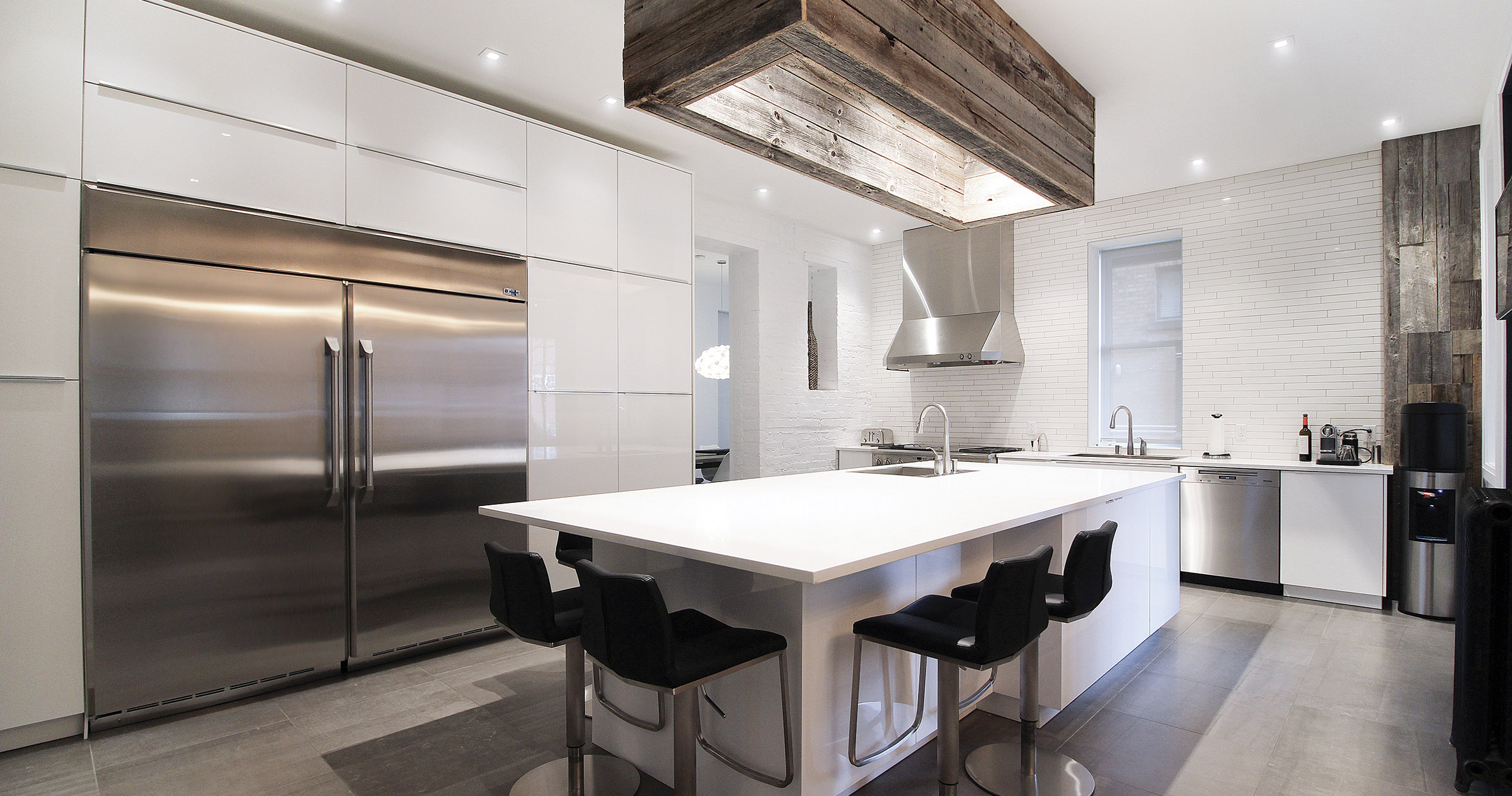 Construction project consultant Edgar Rosa realized his childhood dream of living in Outremont when he and his wife, Ana Da Silva, bought a circa 1913 home on St. Joseph Blvd. almost two years ago. “I love being in the city again after living in Ahuntsic,” says Edgar. “I love being able to walk everywhere.”

The house offered almost 5,000 square feet of space over three floors in a sturdy, grandiose structure. But its small rooms, narrow windows and location among taller buildings made it gloomy despite its impressive wainscotting, moldings, cornices, and nearly 11-foot-high ceilings. The Victorian features also didn’t figure into the expansive, modern home that Ana wanted.

Using Edgar’s 20-plus years of experience and passion for renovating older properties and the expertise of two designers, the couple achieved a striking balance of old and new. “Catherine Condoroussis and Jodi Ostrzega of CCJOD helped us to figure out how to open up the existing rooms to optimize the space and maximize natural light even though we couldn’t install larger exterior windows on the original building under the city’s historic property bylaws,” Edgar says.

Ana had initially wanted to remove the Victorian archway and Ionic columns in the foyer, but Edgar and the designers persuaded her to keep them. “We really wanted to preserve the elements that showcase the home’s original craftsmanship,” Condoroussis says.

The result is stunning, with the lacquered white archway and columns framing the expansive quartz-clad island of an ultramodern kitchen. “It’s the perfect transition from past to present,” says Edgar, who admits he wasn’t sure at first about having guests look directly into the kitchen from the foyer, but now appreciates how the unique contrast redefines their house.

“We had to open up the two existing kitchens and get rid of a short hallway, small bedroom and narrow back staircase to create the necessary space, but the kitchen is the hub of our home with the busy schedules
that my wife, our three kids, and I have,” Edgar says. “It’s also where our guests naturally gravitate.”

The couple also transformed a patio enclosure into a dinette, creating more light with taller windows. Ever attentive to quality restoration, Edgar had the exterior kitchen wall sandblasted before it was repainted, and lighting installed in the former window to display a vase reminiscent of yesteryear.

He and Ana kept most of the architectural features in the living room, boudoir and dining room. “We just couldn’t see ourselves destroying all the work that went into the dining room’s built-in hutch with its beautiful glass inlays,” Edgar says. “Or the vaulted ceiling … you couldn’t find someone to do all the intricate plasterwork now.”

Preserving the ornate features posed significant challenges when it came to updating the wiring and other systems. “We used suspended lighting because we didn’t want to risk drilling into the plaster,” Condoroussis says.

The oak wainscotting found throughout much of the main floor and all the doors and moldings were stripped bare to maintain the sharpness of their indentations and corners when they were refinished.

A third prep kitchen attests to how much work it once took to prepare meals for a prominent family’s guests. By removing a concrete slab and earthy subfloors in the steet-level basement, the couple has the ceiling almost nine feet high at the property’s side-street entrance. Energy-efficient doors and windows, urethane insulation, and heated polished concrete flooring on the ground level have the new furnace working only a few days annually.

The designers helped the homeowners to relocate a secondary staircase on the upper floor into a hallway. They removed the flooring from an existing octagonal cupola-like structure so that it now provides abundant natural light through its windows, while still leading to a rooftop garden terrace.

The designers also worked at length with the homeowners to reconfigure the seven bedrooms and two bathrooms on the second floor into a master with ensuite, a bedroom and bath for their young daughter, and two bedrooms and another bath for teenaged boys.

“I can’t say enough good things about how Catherine and Jodi helped us to reinvent this home’s existing space,” Edgar says.

And to give him and his family the urban life they craved. •