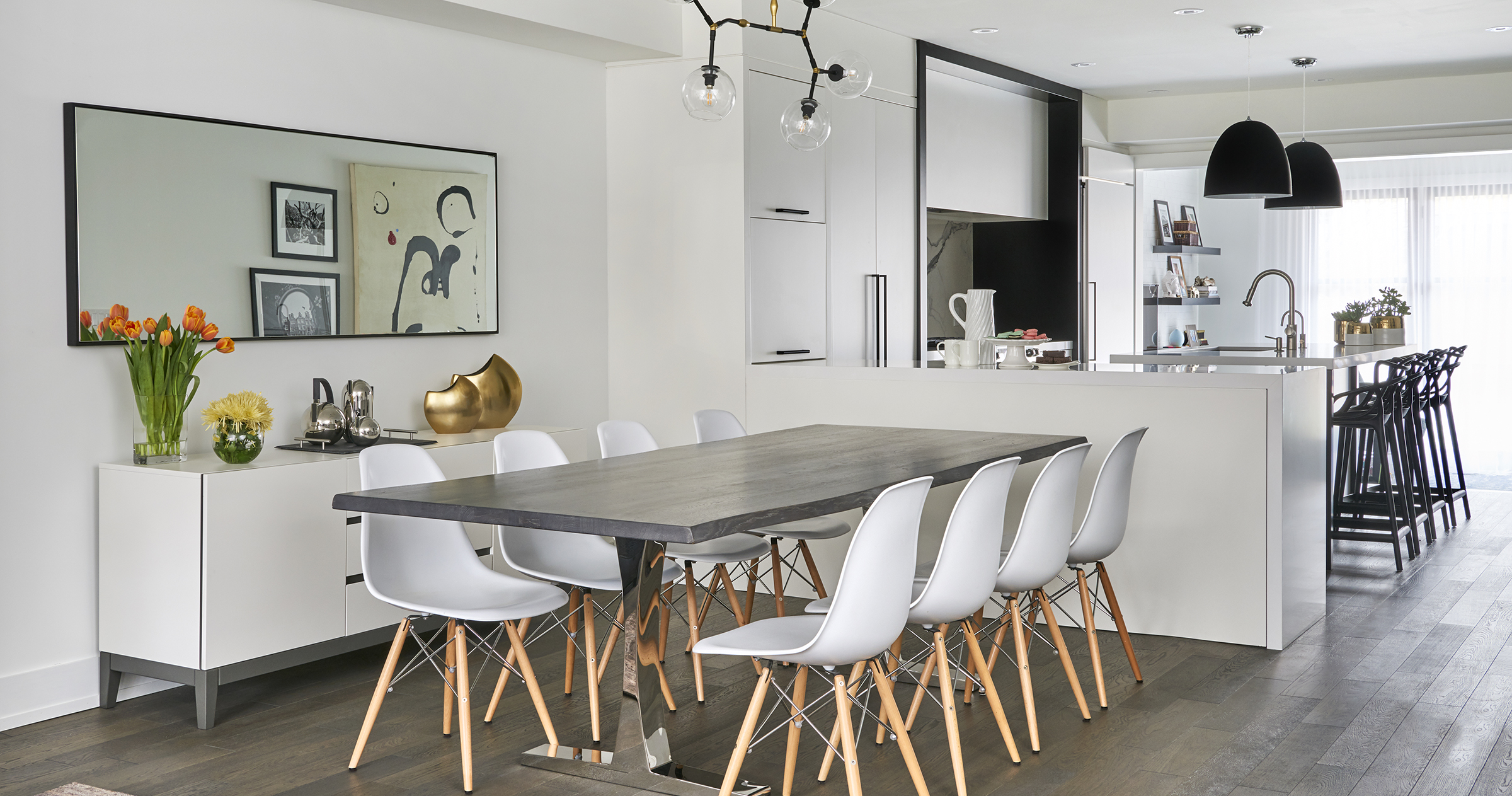 Staying In The Neighbourhood

Rather than moving, a growing family renovates to create more space in the home they love

And baby made three — children under six years of age, that is. Which for the owners of this detached two-storey home triggered a stay-or-go dilemma. The family definitely needed more elbow room than 1,500 square feet afforded them. But after seven years, they had grown attached to both the 1930s-vintage home and the Humewood area of Toronto, with an elementary school and a park so nearby.

“My husband and I hemmed and hawed a long time about moving,” says one of the homeowners. “But our love for this neighbourhood won out.”

And so the family packed up and moved into a nearby rental home for 10 months. During that time, construction crews from Haddington Developments were hard at work, executing architect Drew Laszlo’s plans for an extension to the rear of the house. It adds another 556 square feet and an extra second-floor bedroom to the existing three, plus a home office. A playroom area was carved into the basement and a family room with patio doors for easy access to the deck and backyard was added to the main floor.

It also gave the homeowners – she’s a freelance copywriter, he’s a wealth advisor – an opportunity to take the home’s style to the next level. “My approach had always been on the modern side and somewhat eclectic,” says one of the homeowners. “I wanted it have an even more contemporary and cohesive look.”

Designer Jodie Rosen, owner of Jodie Rosen Design, was called in to help with the upgrade. “The homeowner knew what she wanted and did a lot of research,” Rosen says. “It made my job easier; it was a team project.”

The kitchen design, for instance, began with many disparate elements that the owner had seen and liked, such as the funky black counter stools and light fixtures. To balance the look, Rosen added a black frame around the range area, echoed in a black detail on the island, which contains the sink and a dishwasher. For the perfect backdrop, a porcelain slab emulating white marble with striking charcoal-grey veining was used on the backsplash. Counter space is maximized by the peninsula that also serves as both a visual divider and a sideboard area. A spacious walk-in pantry that is off the kitchen compensates for the lack of overhead cabinets.

“The kitchen is the heart of the home, literally,” says the designer. “It lies at the central point between the front and back of the house, the more public and private sides.” The living room runs off the dining area at the front of the house, while the family room faces the backyard.

The kitchen’s black-and-white colour scheme set the new, more contemporary style. To ensure it carried throughout the entire home, all doors on the main floor are black, walls are painted white. The living room’s existing gas fireplace received a very dramatic makeover. Rosen framed it in black Caesarstone and then covered the face with MDF panels painted a shade of slate with contrasting lines in between painted black. Shots of bright, cheerful colour accents add a sense of fun to all the sophistication. They appear in accessories throughout the home, especially in the children’s rooms.

Colour takes centre stage for the main floor powder room. Rosen calls the multi-hued wallpaper pattern “dizzying, but a lot of fun;” she and the homeowner liked that it pulled in all the colours used in the home. Upstairs, a vanity original to the home was given a coat of bright turquoise paint and moved from the master bathroom to the one shared by the children. In contrast, the master bath remains a serene oasis in shades of white and gray.

To tie all the main floor spaces together, Rosen suggested running prefinished engineered white oak flooring from the front door straight through to the family room. “The original plans called for a front hall closet,” says Rosen, “but as construction was underway, we realized it detracted from the beautiful staircase railing the homeowner had selected.”

Since the family mainly used a side entrance, it wasn’t much of a sacrifice. To make up for it, space that would have gone into the kitchen was used to create a utility area. Along the corridor are found the pantry, powder room, and a mudroom to which the designer added more cabinets and benches to store coats, boots, strollers and sports paraphernalia.

Now back in their “new” old home, the homeowner couldn’t be more thrilled with how it both functions and looks.  “It feels really open, spacious and airy now,” she says. “It’s stylish, but also fun. We’re really happy here.” •

Farewell To The Sixties