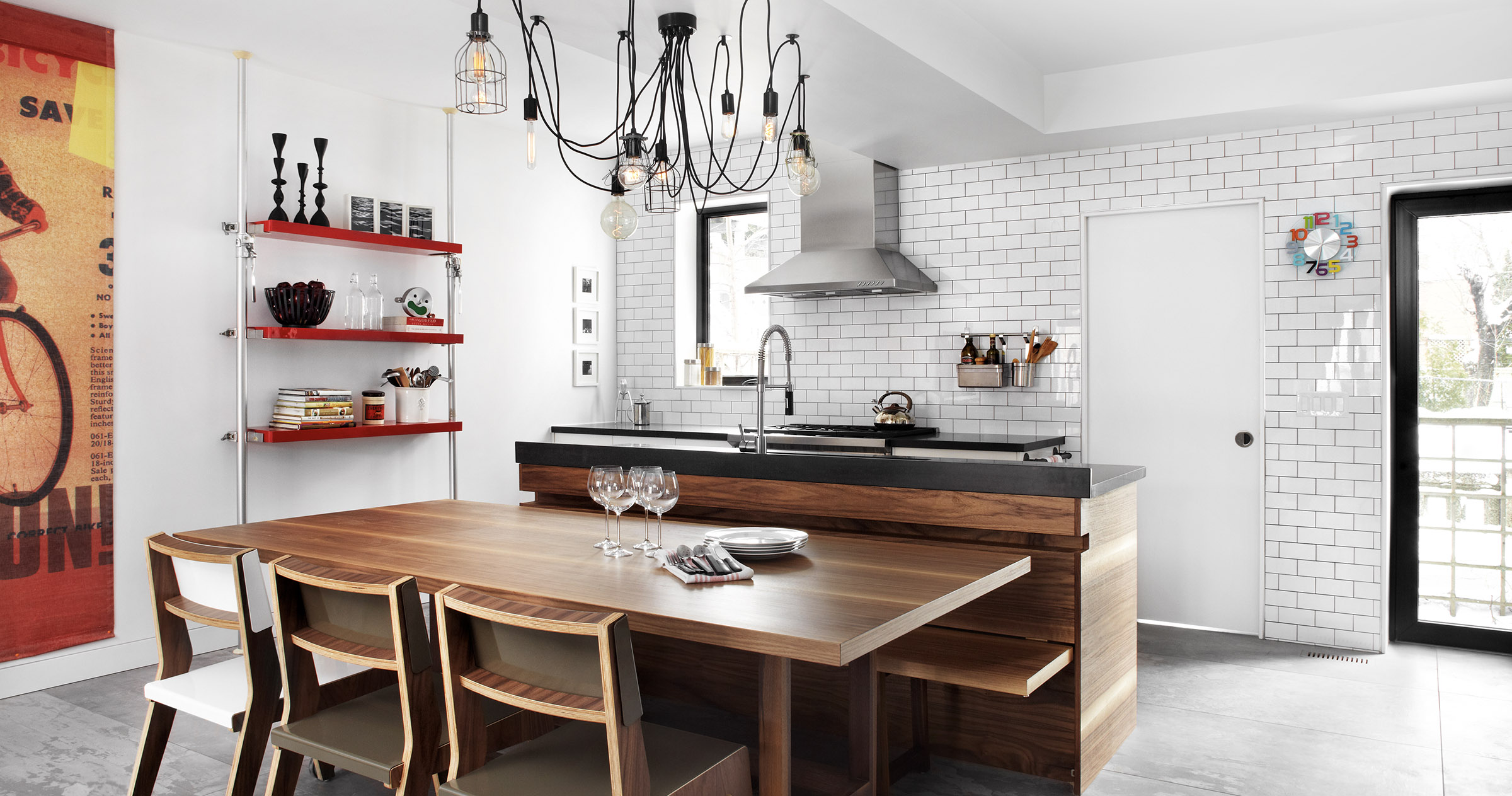 Turning a small Victorian Cabbagetown house, with a floor plan that could best be described as a rabbit warren, into an open-concept home with a functional chef’s kitchen required some ingenuity on the part of interior designer Kirsten Marshall. The old kitchen was so small it didn’t even have a full-size refrigerator, she says.

Marshall and her colleague, Ashley Barrey, from Palmerston Design Consultants in Toronto, devised an innovative table/island design that addressed the space challenges of the project while meeting the industrial-chic aesthetic desired by their clients. The homeowners, who had received several “old ladyish” design bids, believed Marshall’s approach was a notch above – literally and figuratively, as the design hinged on a groove carved into the walnut wood island to stow away part of the table, and a collapsible bench – both of which kept the space required by the table for everyday purposes to a minimum, while also allowing the couple to roll out the table, flip open the bench and host dinner parties.

Marshall says she was thrilled when furniture maker Julian Villasenor said he could build something to their specifications. The custom island was critical to maximizing the space for the couple, who love to entertain. Moreover, the dark wood used for it was a nice contrast to the white IKEA kitchen cabinets.

“The island they designed was the key to the whole room,” says the homeowner. “It gave us this dining room table, which can easily seat 10, but when pushed back doesn’t take up much space. It gave us a ton of space we didn’t have before.”

The owners ripped out the wood floors on the home’s main level to install oversized “concrete” tiles, which are actually porcelain, and which complement the charcoal-grey Caesarstone countertops. The tiles have fooled many a contractor, according to Marshall. Any concerns about the floor being cold were eliminated with the decision to remove the heating system and use in-floor radiant heat under the tile. “The heated floors are great, even on the coldest days,” says the homeowner.

As much as the clever design of the island was integral to the room, the “octopus” lighting fixture above the table and island is perhaps the room’s most striking feature. Marshall retooled the light to include an assortment of bare bulbs and some which are caged. Set against the white subway-tile backdrop, it lends to the “Brooklyn loft” ambience of the home, the construction of which dates to 1900.

The homeowner appreciates the “timeless” feel of the room and was delighted that Marshall could articulate what the couple wanted, which was that “concrete, industrial feeling.” What’s more, when the contractor, Caliber Group, didn’t run into any unexpected surprises during the five-month renovation, the homeowners were able to redo an upstairs bathroom in addition to reconfiguring the main level. “We have gained so much from this innovative renovation,” says the homeowner. “Now we just love cooking in our kitchen and entertaining there.” •

The Evolution Of The Urban Village